Today's Bureau of Labor Statistics jobs report finds payroll employment increased by 209,000 in July, slightly slower growth than last month, and the unemployment rate ticked up slightly to 6.2 percent. Coming after this week's GDP report that found the economy was actually growing in the second quarter (an improvement over the negative growth in the first quarter), pundits are likely to continue declaring the the numbers are going in the right direction, but still failing to reach lift-off velocity after a long, sluggish and tentative start. Some argue that slightly higher unemployment levels are to be expected as an army of long-term unemployed Americans gain enough confidence to start looking for work again.

"Nearly half of the growth for the second quarter came from inventories piling up, which is not a reliable sign that the economy is going to grow faster going forward. Essentially, we made up some of the ground lost in the first three months of this year, but there's nothing in (Wednesday's growth) data to indicate that the economy is growing more strongly than it has for the past couple of years."

Last night, at the very last minute, while House and Senate Republicans embarrassed themselves by failing to deal with the immigration crisis, the Congress was just barely able to pass a transportation funding bill before going home for a month. It was a small ($11 billion), short-term bill that will only continue funding of highway and mass transit projects through May 2015. But it prevents a major blow to workers in the construction industry that could have devastated the economy. The cobbled-together deal could easily have failed, and on Friday the trust fund would have been exhausted and federal money would have been cut off to major transportation projects all over the country.

In the debate over the highway bill, Americans were given a demonstration of the way conservative ideology and politics have held back economic recovery and, many would argue, sabotaged growth and job creation.

There was no excuse for this last-minute funding crisis. Congress has for decades regularly replenished the highway trust fund, usually by raising the gasoline tax. But today's Republicans can't countenance any tax increases.

A growing House GOP faction, modeling their thinking on Paul Ryan's poverty plan, thinks the trust fund should be sent back to the states to administer, and many of them refuse to vote for any new transportation funding. Most conservatives are not even willing to talk about progressive taxation to pay for infrastructure. And even as this last-minute deal came together, officials at Heritage Action and other conservative groups continued to argue that failure to pass the highway bill would not harm the economy. While expert groups, like the American Society of Civil Engineers have urgently warned that America should be spending trillions of dollars on our critical systems, including roads, schools and airports, it is clear that conservatives are willing to block progress on spending that would just keep maintenance and repair going.

Of course progressives, many of whom lobbied to save highway spending, should be pleased that we didn't go over the transportation cliff, which would have cost over 700,000 construction jobs according to the Transportation Department. But we should also remind our fellow Americans how conservative ideology, which opposes public investment as well as reasonable and progressive taxation, has crippled our economic recovery.

As the great recession threatened to spiral into a new great depression, conservative Republicans lobbied to water down President Obama's economic stimulus plan, and then none of them voted for the weakened final product in the House (it won the vote of only three Senate Republicans). Americans should see this as economic sabotage.

Later in the president's first term, when we should have been debating a second round of job-creating public investment, conservatives used the threat of refusing to raise the debt limit to force Obama to shift to deficit reduction. Together, they constructed a series of "fiscal cliffs" that succeeded in changing US fiscal policy from stimulus to contractionary austerity.

This graph from Goldman Sachs tells the story of how conservative budget cutting has undermined growth from mid-2010 through 2014. 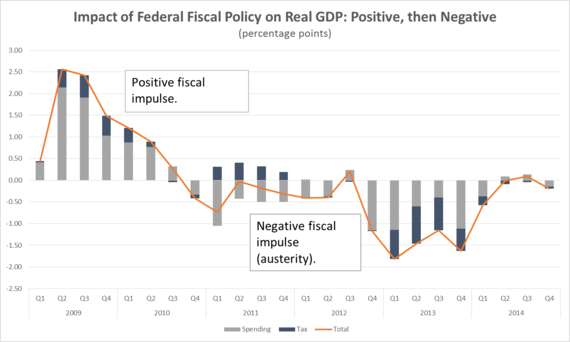 As you can see, the impact of austerity on the economy is projected to be reduced over the next two quarters, but the next budget is not expected to be expansionary -- and Republicans are still writing budgets under the mistaken conservative theory that spending cuts somehow stimulate growth. If the failure to pass a simple highway bill could bring us to the brink of losing 700,000 construction jobs, the attempt to negotiate the next full budget could really undermine our still-fragile recovery.

The big danger America faces is permanent stagnation -- a slow-growth economy that never produces good jobs at the rate necessary to employ all the people who lost jobs during the great recession and the new entrants into the labor force. A real growth agenda would address America's far more massive public investment needs. The $11 billion highway bill that just barely passed only prevents us from falling backward.

Harvard economist Lawrence Summers, who was President Clinton's Treasury Secretary and President Obama's Director of the National Economic Council, is worried about the economy. He thinks "a substantial step-up in infrastructure investment would serve all of our major economic objectives. It is as close to a free lunch as economics will ever produce."

In a widely-read article in the Boston Globe, Summers declared:

There is increasing concern that we may be in an era of secular stagnation in which there is insufficient investment demand to absorb all the financial savings done by households and corporations, even with interest rates so low as to risk financial bubbles. Raising demand through greater infrastructure investment is an antidote for such malaise as well as a source of better employment and economic growth.

So while it is good that 700,000 jobs were not destroyed last night, America needs to be investing to create millions of jobs, not just to prevent the worst. And while strong majorities of Americans agree we should invest in infrastructure, jobs and growth, progressives also have to turn that support into an explanation that fingers the political actors who were responsible for our economic stagnation.

Conservatives have blocked every significant plan for investing in jobs and growth since the stimulus. They claim they have an alternative, but their program -- conservative austerity -- has so damaged the recovery it deserves to be called what it is: economic sabotage. Americans who care about economic growth and job creation need to call out conservative economic sabotage as it happens. So let's take that responsibility seriously.

Roger Hickey is Co-Director of the Campaign for America's Future.