The first Friday of every month is what we call Numbers Day -- it's the day that the Bureau of Labor Statistics releases the monthly jobs report. We have a ritual at the Labor Department -- at 8 a.m. we gather around a table in my office, and the commissioner of labor statistics briefs me and the department's senior leadership on the numbers.

We go through pages of charts and graphs, dissecting industry-level data, discussing how the weather or a holiday other economic factors, such as a major union strike, might have affected the numbers. We talk about what the numbers mean for the larger economy, and what they mean for working people.

Cable news talking heads and political pundits have a Numbers Day ritual, too - if the numbers are high, they say the American economy is booming. If the numbers are low, they proclaim that the recovery has come to a screeching halt.

That was the case last month. When May's jobs report showed weaker than expected job growth, we heard the predictable claims that the economy had come to standstill, that American businesses and workers were doomed.

And it has been the case each of the eight times since 2011 that the numbers have come in below 100,000. Each time, the Eeyore caucus has declared that the sky is falling. And each time, they have been wrong. 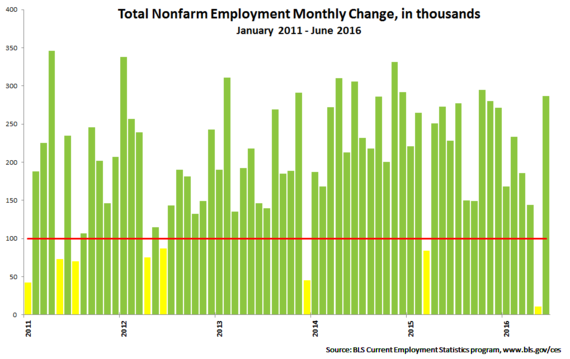 As I said last month, one month does not make a trend -- a fact proven by today's jobs report. The American economy added 287,000 jobs in June. All told, since early 2010, American businesses have added 14.8 million jobs. The unemployment rate is 4.9 percent -- down from 10 percent at the height of the recession.

Our economy is strong and resilient, growth is broad-based and I believe we're well positioned to weather global headwinds. As the recovery continues, it is inevitable that the pace of job growth will slow -- I don't expect the total number for 2016 to be as high as 2015. At the same time, as we get closer to full employment, wage growth is likely to continue to pick up, providing a much needed boost to American families.

But my optimism about our nation's economy isn't based on the jobs numbers alone. A whole host of indicators show that we continue on an upward trajectory:

There's no doubt that we have more work to do to grow America's economy and make sure more people can share in the prosperity being created. Our economy is out of balance, with more and more families feeling like the middle class dream is out of reach. We have to take action to make sure the rising tide lifts all the boats, not just the yachts.

We need to raise the federal minimum wage, plain and simple. We need to do more to support working families, like guarantee access to paid sick and parental leave and make sure every parent has access to quality, affordable child care. We need to enact comprehensive immigration reform, to bring people out of the shadows and empower them to more fully and freely participate in their communities and the economy. And we need to invest in our nation's deteriorating infrastructure -- investments that would create jobs and benefit all sectors of the economy.

But to deny that our economy is strong and growing -- whether for cable TV ratings or political purposes -- is simply ignoring the facts.

Seven years ago we were down for the count. Today, we have made a remarkable recovery from the worst economic crisis in generations. I'm proud of the work we've done as a nation to get here -- and I'm confident in our resilient economy, and the people who power it.