[Thanks to the shutdown, the September jobs report was delayed. It was released this morning, which is disarmingly weird for those of us with data-driven circadian rhythms keyed to the first Friday of the month. Here's what I posted back on October 4, when it should have been released. I was correct to be below consensus but was not pessimistic enough!]

Payrolls were up a scant 148,000 overall last month and only 126,000 in the private sector in a weaker-than-expected report. The unemployment rate ticked down slightly from 7.3 to 7.2 percent, and, in a slightly more positive sign, not because people were leaving the job market.

August's payroll numbers we revised up 24,000 to a relatively strong 193,000, but July's revision went the other direction, down 15,000. Given the ups and downs, it's most useful to look at the underlying trend: averaging monthly gains over the past three months, aka the third quarter of this year.

Payrolls were up an average 143,000 per month in the quarter, down from 182K last quarter, and 207K in the previous quarter. Private payrolls expanded by only 129,000 last quarter, well down from their 212K gains in the first quarter of the year. And remember, these data do not factor in the direct impact of the shutdown that lasted through the first half of this month--October's jobs report is almost sure to show even more weakness. 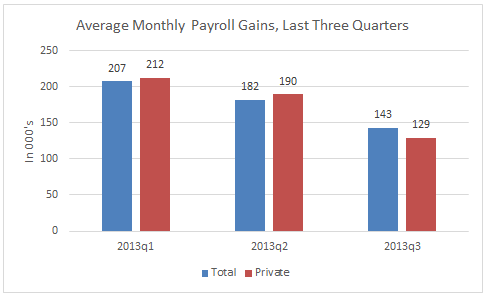 This chart paints a very discouraging pattern. We're four years into a recovery that began in the second half of 2009, yet unemployment is still highly elevated, and job growth is once again decelerating. There should be no question that fiscal drag and general political dysfunction continues to hurt working families.

I'll get into the details later -- there are some brighter spots than the headline numbers:

-- construction employment was up 20,000, after posting few gains in recent months, with jobs added in both residential and non-residential building.

-- both hourly and weekly earnings are up about 2 percent over the past year, no great shakes, but ahead of inflation, which has been very tame of late, growing 1.5 percent (Aug12-Aug13).

-- state and local government have added jobs in all but two months this year, up 82,000, and reversal of earlier trends.

-- the comprehensive under-employment rate also ticked down to 13.6 percent compared to 14.7 percent a year ago, due in part to the decline in involuntary part-time work of 681,000 over the past year.

-- the share of the long-term unemployed, while still highly elevated, ticked down a percentage point to 36.9 percent.