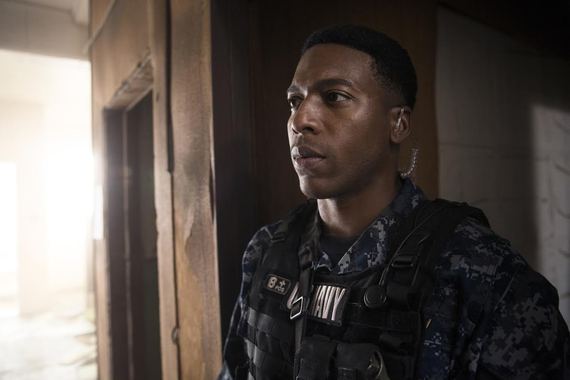 The Last Ship returns for its third season on TNT on Sunday, June 12th, and if you haven't found a reason to watch the Michael Bay produced action-drama yet, two immediately spring to mind. One; the show that focuses on a navy ship sailing the seas after a global pandemic offers both quality drama and blockbuster worthy action scenes that could stand up against The Walking Dead, and two; Jocko Sims as Lt. Carlton Burk.
A triple threat that acts, sings and produces, Sims is on the fast-track for super stardom with an extensive resume of prestigious work including Master's Of Sex, Jarhead, Dreamgirls and the television series of Crash, among many more credits he's accumulated over a relatively short time. He even hosts his own radio show that he runs with his mother. Yep- he runs it with his mother! And she did some job raising him- this well-spoken, intelligent and talented man really is the whole package. Perfect for role of an honorable lieutenant...or the world's next big breakout action star!
Here, he talks about what it's like to play a member of the navy authentically, his close bond with his cast, his love of music and more!

The Last Ship just premiered in Washington DC and you really got see the full extent on how this show inspires the real Navy seals that can relate- you got to experience a private presentation and tour of the U.S. Navy ceremonial guard and Ray Mabus, the secretary of the U.S. Navy said he loves the show, giving it his seal of approval. Talk about that experience.
Overall, the trip was very overwhelming. As you said, we got to stop by the base where the Navy guard resides in and they are responsible for all the ceremonial events take place all over the U.S. and in the world, and they reside over about eight to ten burials at Arlington per day. They are so keen on attention to detail, as is the entire Navy. They take a lot of pride in what they do and work really hard. It was just a reminder that when we put on those costumes, they might be costumes for us but they are emblematic of the actual Navy uniforms and that we are representing the U.S. Navy. And they are so excited when we come into town, but we are equally as excited and honored to be around them and without the support of the United States Navy, this show wouldn't be possible. And then at the screening, Ray Mabus was there and I was taken aback by how enthusiastic he was about the show. He made an appearance during season two playing himself- that's how much he loves the show. I didn't get to meet him then, but he is a great guy and a great leader. And he gave us a certificate of appreciation, which he says he doesn't give many out, but he says The Last Ship really does a public service for the Navy. It's an overwhelming honor to hear that.

This isn't the first time your show really got involved with the real Navy either. Last year, you guys joined them for fleet week for #selfiewithasailor- talk about that a bit and how these collaborations with the Navy really inspire people.
Fleet week is a great thing that happens in different cities and in New York they do it every year. It's just to remind people of the commitment of all the people in the U.S. services. So, TNT in conjunction with the U.S. Navy teamed up to have us participate, so Adam Baldwin and I went out and showed our support. We promoted that every picture you took with anyone from a branch of the service using that hashtag, we would donate a dollar of the $25,000 from The Last Ship to the U.S.O. It was another incredible experience.

With all these collaborations with the real Navy, you really get time to pick their brain and help make your character authentic. This isn't the first time you've played a soldier either. You were also in Jarhead. What draws you to this kind of role?
I learned right away that this would not be an ordinary role. It's the most dynamic and fun job I've ever had. When we first got thrust into this mission, it was obviously the biggest mission we would have because we needed to keep this scientist who had this vaccine alive- or else the world as we know it would be no longer. I came out and was really hard on my guys- my character was tough, but also had a balance because after every time I'd yell at someone I'd look at Captain Chandler, played by the great Eric Dane. And that balance has been really interesting. Also, I wanted to get into the best shape of my life for this, for the past three seasons. It's not something they asked me to do- but I just thought it was necessary and what I owed the real U.S. Navy, authenticity wise. 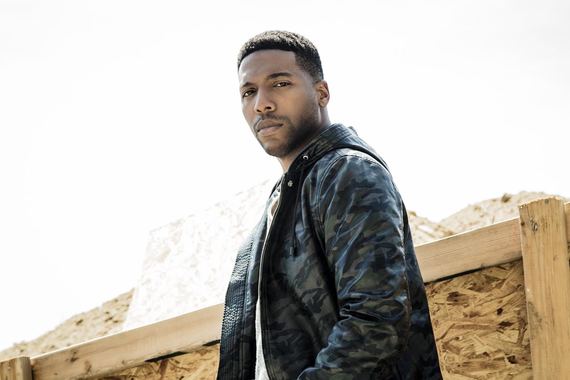 You also seem extremely close with your cast off set. That kind of familial bond and brotherhood will definitely give a show like this heart- because most times, more than anything, that is what soldiers want to see. Talk about your relationship with your cast.
Much like sailors and soldiers in the military rely on each other, we rely on each other. Back in Jarhead I was trained by Sergeant Major Dever, a retired marine, and we took classes and I learned so much and I was able to bring that to The Last Ship. And one of the things he spoke about was that brotherhood and how we don't want to let each other down. We have to look out for each other and when you have that camaraderie you are moving as one unit. And no offense to every other show out there and everybody works hard, but this is not an easy show to work on. Not only do you have to remember your lines, but it's a lot of action and the majority of us weren't necessarily athletes, let alone soldiers. So, the training on television goes really fast and you gotta get it down and make it look professional. The fact that we rely on each other has really made us form a special bond. And we also have a lot fun- we have our fair share of being silly, and it's great we all love each other so much.

You turned in a great performance on Masters of Sex, portraying the leader of racial activist group who got involved with the racist boss of your kid sister during extreme racial tensions. Talk about working on that show a bit and what would be, perhaps, your dream show to work on, or your dream role to play?
That was pretty close to my dream role. My character was extremely dynamic. He spanned over the course of two years in seven episodes, so just exploring how I would grow in those two years- from not trusting this woman who is not only of a different race, but a race that is representative of the persecution of his people, to basically loving her, was an amazing journey as an actor. And to not only experience it for me but to watch Caitlin Fitzgerald experience it was such a joy. For fans, that was the most liked story line for her character, an she was just so excited and it was a great experience.

You co-host a radio show- The Apollo Night LA- which is aimed toward spotlighting indie music artists and really giving them a chance. Talk about that a little and why you wanted to start that up. When can people hear it?
We focus on putting the unsigned artists on the map. Most of the popular radio shows play all the same music, and we can guarantee you haven't heard most of these songs before. It's really about the artist and giving them the opportunity. We've even had people get deals and that's what it's all about. It was actually started by my mother, Karen Sims, and we brought on a very great comedian, Luenell. We now have Guy Tory, who is also great. Just last week we had legendary Roseanne Barr- and if you can imagine a show where we are playing primary hip-hop and she's having glasses of wine? It was the funniest thing. It's on every Monday night at ApolloNightLA.com at 7:00 PM, pacific time. 10:00 PM Eastern.

You've had a lot of celebrity guests on the show like Jamie Foxx, Ja Rule and Keke Palmer- who was also on Masters Of Sex with you. She's an amazing singer. Are you close with Keke? Do you have any other big name guests lined up?
Keke became my friend on the show and she is just taking off. She was moving like a bullet when I met her. The youngest person to ever have her own talk show on BET, she went on to do Broadway and Grease Live- I couldn't be more proud of her. We also had Faith Evans on the show, and En Vogue- but at the end of the day it really is about the up and coming artists and they love it because there is no other place where they can really get there music heard and critiqued like this by these type of people, so it's really great.

You obviously have a very clear love of music and even got to perform yourself when on Crash- any chance you'll be pursuing that more? What else is next for you?
I'm actually working on a comedy series! I've been doing drama my whole career and I'm a really funny guy- at least I think so! So I am putting together a comedy series about a group of guys in their thirties that are forming a hip-hop group, and you can just imagine the comedic antics of a group of thirty-something's deciding to be rappers or what-not. And we'll also be making real music and putting out legitimate songs and working with good people. We take the music seriously- so the soundtrack should be good. I want a Grammy one day with this- and I think that we can do it!

And from the way Sims is sky-rocketing in every direction, it doesn't seem that anything could stop him from all his goals. A Grammy might just be the tip of the iceberg.
The Last Ship premieres Sunday, June 12th on TNT.