One of the most important events at Cannes is the Kering "Women in Motion" series, featuring famed women actresses, directors, producers and other industry professionals speaking about what it means to be female in a male-dominated business. The statistics on the underrepresentation of women in film are startling. Less than 12 percent of films worldwide have important women characters, aside from the token girlfriend or mother. In Europe, only 16% of grants are allocated to projects by women directors. And in the US, only 9% of directors are female.

The first speaker this year was Jodie Foster. 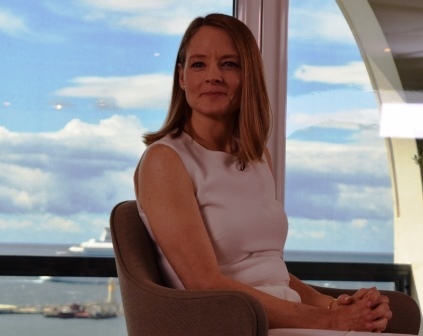 She began modestly. "I am not a spokesperson of anything. I can only speak from my personal experience of fifty years in the business."

Elegant and fresh in her simple white dress, she smiled at the audience and stated that since she launched her career [in the 1960s], the presence of women on the set has changed radically.

"When I was a child making movies, I never saw another woman, except maybe the woman who played my Mom. The sets were all male. I saw the faces change as time went on in the fifty years. Today there are women producers and directors. And that is just one arena that has changed for the better."

Foster was positive about the "many gains".

But why are there still few women directors making big Hollywood films?

"Executive producers are risk-adverse. This is the most risk-adverse period in history. So many things have changed so much in terms of economy, technology and the structure of the studios, and women fall in the category [of risky investment). It is hard to look at a face that is 100% different from yours. You worry that you will make the wrong choice, so you go with the guy who looks like you."

In making her own shift from actor to director, Foster was lucky. She was in the privileged position of being an insider in the business.

"Men in the business were like my dads, my grandfathers. They gave me opportunities. Executives and producers saw me as their daughter. I was in the boy's club."

She was also lucky to have had access to role models of women directors as a child. "I was raised by a single mom. My mom took me to see a lot of European movies, including movies by women. Lena Wertmuller's films touched me quite a bit. So did the films of Margarethe von Trotta."

The theme of "parents" came back often in Jodie Foster's talk. It had been important to have a good parental figure mentoring her, whether it was director Jonathan Demme "sitting [her] down like a person" or her own mother, whose opinion she valued.

And Jodie was a good 'daughter." She "really listened".

And she was successful. 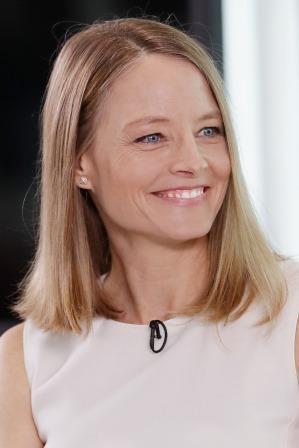 "I started my own company; my company became independent. I figured out how to write my own movie. I directed my first two movies before I had children, waited twelve years, and then did my next films."

One prejudice is the "deadline" of age that is imposed on women in the industry.

"People told me as a child that when I am forty you will never work again. I scrambled to do as much as I could in a certain amount of time," she smiled. "But it [turned out] not to be true for me!"

Although it was true that things "calm down" for women over forty.

"That's not true for men over forty. For men, it doesn't calm down."

A thorny issue for a female director is leadership on the set: a nontraditional female role.

What did leadership mean for Jodie Foster?

"If you are a woman, you will have a different style of leadership. I confuse people because I am so direct. I am not a bully and will not respond to bullying like a bully. That's confusing to people. If a woman is direct, it causes confusion, because they don't know the next step. Very often men are confused by women who do not follow traditional roles in conflict. I don't think it's a great plot that men put women down. I think people want to be better and do better, but I think we are stuck with traditional roles."

I asked Foster how she perceives her identity as a female influencing her style of directing: her choices of stories and the way she creates her scenes.

She returned to the concept of parenting.

"As women, we are used to putting ourselves into other people's bodies. As a director, you reach into your character to understand his/her motivations. With male directors, every woman is crying because she was raped."

"It was always rape! For some reason [male directors] saw it as a dramatically easy motivation. They were uninterested in anything more complex emerging for the character."

She elaborated: "Directors should be great parents. And great parents can reach into their children and understand them."

An example of Foster's "parenting" approach is how she developed Julia Roberts' role in her new film Money Monster. Money Monster is a thriller about a financial TV show host (George Cloony) who is besieged by an angry terrorist (Jack O'Connell) . Julia Roberts plays the TV producer Patty Fenn who handles the situation. Contrary to the statistics of women characters in films, she is not in a "supporting" role. 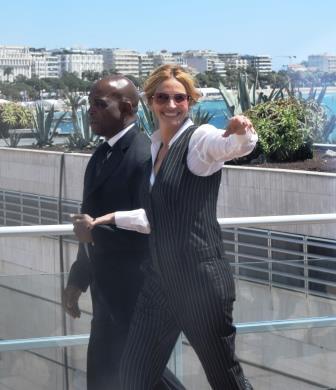 "I wanted to make the woman producer, Julia Roberts, more fleshed out," Foster said brightly, as a seagull flew behind her in the blue sky. "I was really interested in who she was. She is the most capable in the movie. She multi-tasks. She is able to unravel a mystery. None of this was in the original script."

Later that evening I saw Money Monster screen at its Cannes red-carpet premiere. A mass-market thriller, it has a strong political undercurrent, re the position of women, and conveys the convictions of the director. Rare in the thriller genre, the two most active characters are two females: Patty Fenn the producer and the press officer Diane Lester (Caitriona Balfe). Together these women call the shots, and take charge of solving the emergency situation of a terrorist attack.

One cannot help but think that the producer is a stand-in for Jodie Foster herself, as she "directs" the action. "Move the camera," she calls out, while the terrorist attack is being screened live on TV. "Pan in!"

It is a highly entertaining film--and rebellious. Not only is it rebellious against the traditional role of women (as passive side-kicks), but it lambasts the evils of Wall Street and international finance to ruin lives.

It is also subversive about "men" and "power". It is--in Foster's words--"the story of three men who are struggling with their deep sense of failure, and look to the word of money, finance to find value."

If one critique could be made: Foster's film carries a politically dangerous message. To make any significant change--rebel against the system--it takes a heroic bomb-wielding terrorist.