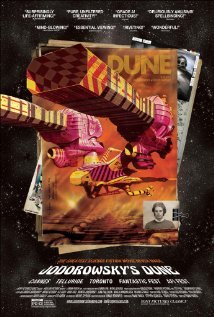 Was Alejandro Jodorowsky's Dune, "the greatest movie never made?" The South African director Richard Stanley makes that claim in Frank Pavich's documentary about the ill fated project, currently playing at Film Forum. Writers, filmmakers and artists often fear they are putting a curse on an idea by talking about it before actually undertaking the work. One wonders if the same thing can be said about talking too much about postmortems, in which an unsuccessful attempt has resulted in a stillbirth. In the case of Pavich's Jodorowsky's Dune, one wonders if it might have been better to let sleeping dogs lie. The documentary brings to light the deficiencies of a millenarian project that might better have lived on a as a great mystery and question mark. Jodorowsky if you remember had achieved notoriety with El Topo which played midnights at Chelsea's famed Elgin theater and other art house venues during the 70's. Jodorowsky had come to film through the avant-garde directing productions of Beckett, Ionesco and others in Mexico before producing early films like The Holy Mountain, whose mixture of provocation and hallucinogenic spirituality appears, from the clips show in the documentary, to have combined the kitsch of Charles Ludlam's Ridiculous Theater Company with the high strung camp of Warhol's Factory. Jodorowsky shared Warhol's infatuation with celebrity and had enlisted Pink Floyd, who'd just recorded "The Dark Side of the Moon" album to do a sound track. Salvador Dali agreed to work only if he received the highest salary in Hollywood at $100,000 an hour and Orson Welles was cajoled with the promise hiring the chef from his most favorite restaurant in Paris to cook his meals. Dali asks Jodorowsky "did you ever feel like you lost a clock in the sand?" and Jodorowsky proudly recounts how he won Dali over by answering "I never found a clock, but I lost a lot." In Jodorowsky's recounting Mick Jagger, at the height of his fame, walked towards him at a Paris social function and agreed to participate. An enormous storyboard was created with the help of Dan O'Bannon, a Hollywood special effects expert who'd worked on John Carpenter's Dark Star and would later co-write the screenplay for Total Recall, Jean Giraud, the comic book artist known as Moebius, Chris Foss, a designer of science fiction book covers and H. R. Giger, the Swiss painter. Everything about Dune was larger than life (in his failed pitch to Hollywood Jodorowsky talked about a movie that might be 20 hours long) and hearing Jodorowsky's claim that he would start the movie with a panning shot of the universe that would outdo the opening sequence of Touch of Evil you get the feeling that this is one case where Hollywood was right. David Lynch's Dune was a failure, but who knows if Jodorosky's Dune might not have been the science fiction version of Heaven's Gate. At the end of the documentary, Jodorowsky's says "I was raping Frank Herbert, but with love." That's no guarantee Frank Herbert would have liked it.