WASHINGTON (AP) — Both President Donald Trump and Democratic challenger Joe Biden will commemorate the 19th anniversary of the Sept. 11 attacks in rural Pennsylvania where one of the hijacked planes crashed in a field, the White House and Biden’s campaign announced Wednesday.

It was not immediately clear whether their visits to the memorial in Shanksville will overlap. But it probably will be the closest that the candidates have been to one another in months.

The National Park Service, which co-hosts the annual memorial event, is planning an abbreviated ceremony this year to minimize the spread of the coronavirus. The agency plans a 20-minute “Moment of Remembrance” set to begin at 9:45 a.m., without a keynote speaker or musical guests. The name of each passengers and crew member from Flight 93 will be read aloud with the ringing of the “Bells of Remembrance,” according to the agency’s website.

A White House spokesman, Judd Deere, said the president and first lady Melania Trump would visit the site “to honor and remember the lives lost” on Sept. 11, 2001. Trump is expected to speak, although the White House and Park Service did not immediately reconcile that with the planned commemoration.

In 2016, Trump and Democratic president nominee Hillary Clinton both spent Sept 11 in New York and both visited the Ground Zero memorial in lower Manhattan. The day ended up being a significant one on the campaign, after Clinton abruptly left the ceremony, complaining she was overheated, and was captured on video struggling to step into a van.

The 2,200-acre Flight 93 National Memorial marks the spot in rural Pennsylvania where the hijacked flight crashed, killing all 40 people on board. Three other planes hijacked that day were crashed into the twin towers of the World Trade Center in New York and the Pentagon. Nearly 3,000 people died in the attacks.

Trump, Biden Will Both Mark 9/11 Anniversary At Flight 93 Memorial
9/11 Remembered 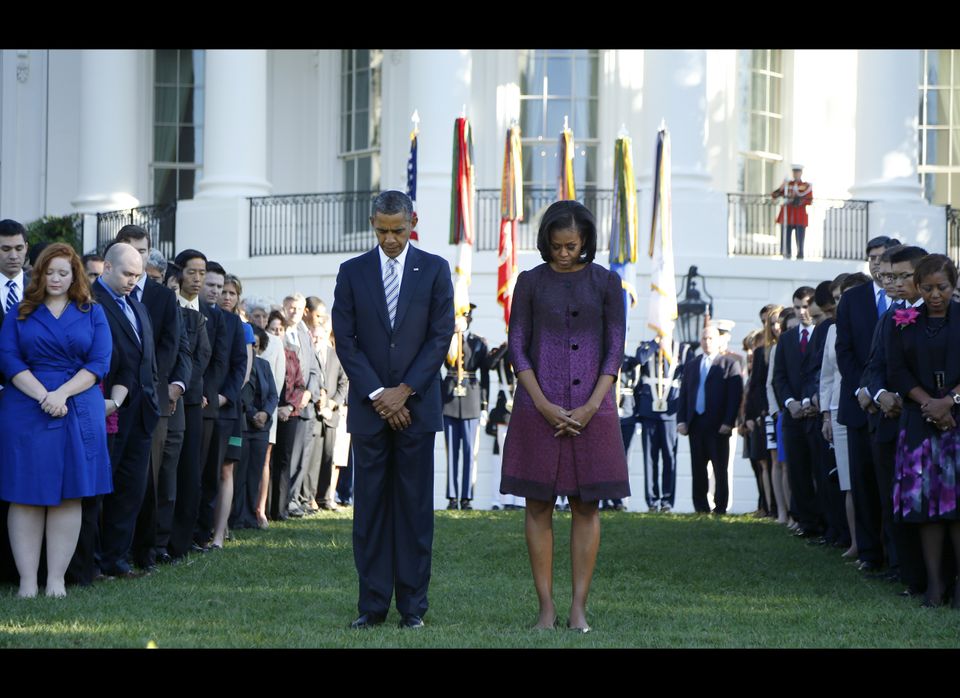 1 / 6
President Barack Obama, First Lady Michelle Obama, and members of the White House staff pause during a moment of silence to mark the 11th anniversary of the Sept 11, attacks , on Tuesday, Sept. 11, 2012, on the South Lawn of the White House in Washington. (AP Photo/Carolyn Kaster)