MILWAUKEE -- It might not be unusual for schoolchildren to write to the president or vice president. But one Wisconsin boy got an unexpectedly personal response.

The 7-year-old, second-grade student at Downtown Montessori Academy wrote a letter to Vice President Joe Biden and other officials a few months ago with a simple idea for making the world safer.

His teacher Jenny Aicher says his letter suggested that if guns shot chocolate bullets, no one would get hurt.

The student – and the rest of the school – got a surprise Monday when Biden's handwritten response arrived in the mail.

In the note, the vice president says he agrees that chocolate bullets would make the country safer and happier. The note concludes: "People love chocolate. You are a good boy, Joe Biden." 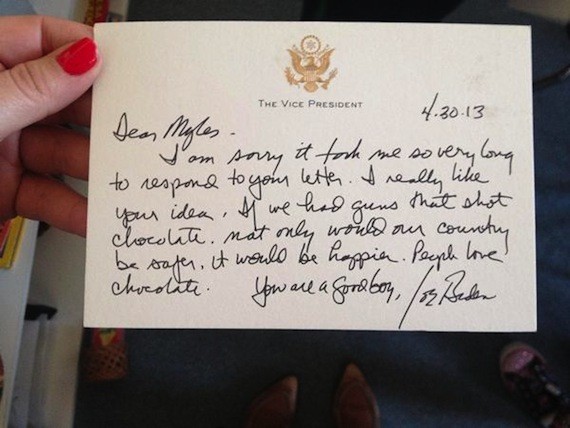 In this photo provided by Downtown Montessori Academy teacher Jenny Aicher, Aicher holds a note, Monday, May 13, 2013, in Milwaukee, written by Vice President Joe Biden to Myles, a 7-year-old second-grader at the school. The school did not release Myles' last name. Myles wrote Biden with an unusual suggestion for making the nation safer: Create guns that shoot chocolate bullets. On Monday, he received Biden's response, which created a buzz at the school. (AP Photo/Jenny Aicher)