HAMPTON, N.H. ― Buoyed by his high standing in the polls and a raft of local endorsements, former Vice President Joe Biden (D) returned to New Hampshire on Monday as a 2020 presidential candidate for the first time, displaying the confidence of a front-runner and casually glossing over debates associated with his decadeslong policymaking record.

As he has in other states, Biden cast himself as the experienced statesman best equipped to defeat President Donald Trump, restore the country’s “basic bargain” of economic fairness and heal the country’s divisions.

“Folks, I know I get criticized for saying that I think we have to unite the country,” Biden told an overflowing crowd at a pizza restaurant in Hampton, a town on New Hampshire’s Seacoast. “The truth of the matter is, we can’t get anything done in this country without a consensus.”

Rather than elide his perceived weaknesses, Biden tackled them head-on on more than one occasion, though his remarks left a lot unanswered.

I feel like the country is broken right now. And we need somebody who can win and then heal it. Mindy Musumeci

In Hampton, the former vice president and Delaware senator brought up, unprompted, a Friday story in Reuters in which his advisers discussed his plans to seek a “middle ground” on climate change. Biden argued, with ample evidence, that he was an early “leader” on climate change but did not specifically refute the claim that his policy plans would be tempered to win over skeptical voters in industrial states with large fossil fuel industries.

Later on at the same event, in an exchange with a voter about drug addiction policy, he volunteered a discussion of his authorship of the 1994 crime bill, which is widely blamed for spawning a punitive, gratuitous and racially discriminatory carceral state. He touted elements of the bill that tried to prevent drug use and encourage alternatives to incarceration for drug use, as well as the law’s prohibition on assault weapons and new protections for women facing domestic abuse.

“I got made fun of because they said ‘Biden is spending money ― not fighting crime ― on prevention,’” he said.

In response to a question from a recovering drug addict about how to combat addiction, Biden defends the 1994 crime bill. pic.twitter.com/HsxKPYeEFp

Biden suggested in January that elements of the law were mistaken, but he has yet to fully explain his evolution on the issue.

It is unclear how these flashpoints would fare under questioning from reporters. The only question Biden accepted from a journalist on Monday was about Trump’s trade war with China.

Biden responded to one question from a reporter at his event in Hampton, N.H., today. It was about the trade war with China. Transcript attached. pic.twitter.com/8SqZkQGGGp

Other candidates for the Democratic presidential nod have thus far been more accessible to the press, save, perhaps, for Sen. Bernie Sanders (I-Vt.).

Yet what Biden has said about his record ― which includes votes for the Iraq War, major trade agreements and financial industry deregulation, as well as representing Obama in unsuccessful negotiations to cut Social Security ― seems to be enough for many Democratic voters.

Attendees at Biden’s two events on Monday ― he also held a rally at Manchester Community College in the evening ― largely brushed aside left-leaning criticisms of his lawmaking.

If anything, deviations from Democratic orthodoxy seemed to contribute to Biden’s perceived appeal as the kind of moderate capable of beating Trump and defusing the country’s rising polarization.

“My feeling is that we need a leader for this country who reflects the greatest majority of the people in the country,” said Dick Swett, a former New Hampshire congressman who punctuated Biden’s speech in Manchester on Monday evening with two-finger whistles and a shout of, “You tell ’em, Joe.”

“[Biden] has the ability to understand everybody. And that’s another reason why I think he’s very electable,” Swett said.

“Joe’s the only one that can give Trump a run for his money,” she said. “After having Donald Trump in office, a lot of even the Republicans will want to go back to just where we were before we became this country that we are now.”

Mindy Musumeci, a construction contractor who, along with her husband Jim, drove up from Bentley, Massachusetts, to see Biden in Hampton, offered a similar assessment.

“I feel like the country is broken right now. And we need somebody who can win and then heal it,” she said.

Asked for her opinion of her home-state Sen. Elizabeth Warren (D-Mass.), Musumeci responded, “I like Elizabeth Warren and this is really hard for me to say as a woman, but I just don’t think the U.S. is ready for a woman president.”

On paper, New Hampshire is not exactly friendly territory for Biden. Sanders won the state by 22 percentage points in the 2016 primary against Clinton; Warren, who hails from neighboring Massachusetts, is also making a major play for the state.

But a Monmouth University poll that came out Thursday showed Biden leading Sanders in the state 36% to 18%. More than two-thirds of respondents said they preferred a candidate who they disagree with but is “stronger against Trump” than a Democrat with whom they agree but see as weaker against Trump.

Sanders led in the state in other polls, though many of them predate Biden’s entry into the 2020 race.

And Sanders supporters have noted that the Monmouth University poll surveyed a few hundred voters by phone, making it likely that it excluded younger voters that form the core of the Vermont senator’s base.

Still, the figures are enough to suggest that the state is more competitive than many poll-watchers previously thought.

Biden’s campaign events on Monday highlighted many of his strengths as a candidate.

In Manchester, he was introduced by not one, but two New Hampshire state senators, as well as former New Hampshire Gov. John Lynch (D). A handful of firefighters clad in yellow “Fire Fighters for Biden” T-shirts stood arrayed behind Biden on a balcony, a testament to the reach of the International Association of Fire Fighters, a labor union that endorsed him almost immediately after he announced his bid.

Those who came to see him skewed middle-aged and older, and warmed to his folksy asides, corny jokes and stern patriotic calls to action against Trump.

And Biden delighted in celebrating what is undoubtedly his greatest asset: the eight years he spent serving as a deputy to President Barack Obama, whose status among Democratic primary voters remains unrivaled.

“When we passed the Affordable Care Act ― I said something to the effect that it was a big deal. Thank God my mother wasn’t around,” he quipped in Manchester, referencing the time in March 2010 when a microphone picked him up telling Obama that the landmark health care law was a “big fucking deal.”

“By the way, speaking of the Affordable Care Act,” he continued, before delivering a staple of his stump speech that draws thunderous applause: “I think it’s worth taking a moment here and saying what an incredible president President Obama was.”

But if invoking the Obama era is a boon for Biden, the Republican stonewalling of that period also raises doubt about one of Biden’s central conceits: That through legislative experience, personal warmth and ideological moderation, he is capable of alleviating Washington’s partisan gridlock.

Senate Majority Leader Mitch McConnell (R-Ky.) seemed to be doing his utmost to prove Biden wrong in a Thursday interview with Sean Hannity on Fox News. He lumped Biden in with the far more progressive Sanders, arguing that regardless of who wins the primary, “the nominee for president on the Democratic side is going to be on a path to try to turn America into a socialist country.”

“The American public knows a socialist when they see one. And Joe is not one,” he said. 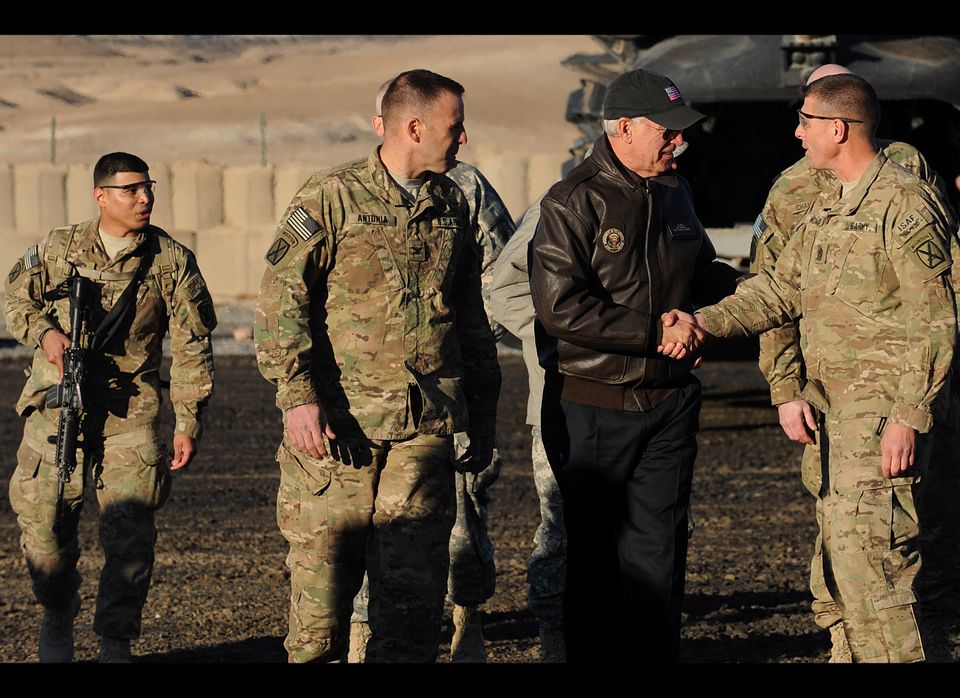