When you take a step back to observe some of the personal campaigns that Street Artists have launched over the last decade or so, it begins to come into focus that in many ways people are trying to reclaim the public sphere for the everyday person. It's far more complicated than that, but using the same techniques and visual vernacular of for-profit concerns, you see ever-larger pieces of Street Art work that attempt to take back the visual landscape in favor of the local human, rather than the market-tested and safely idealized .01%. 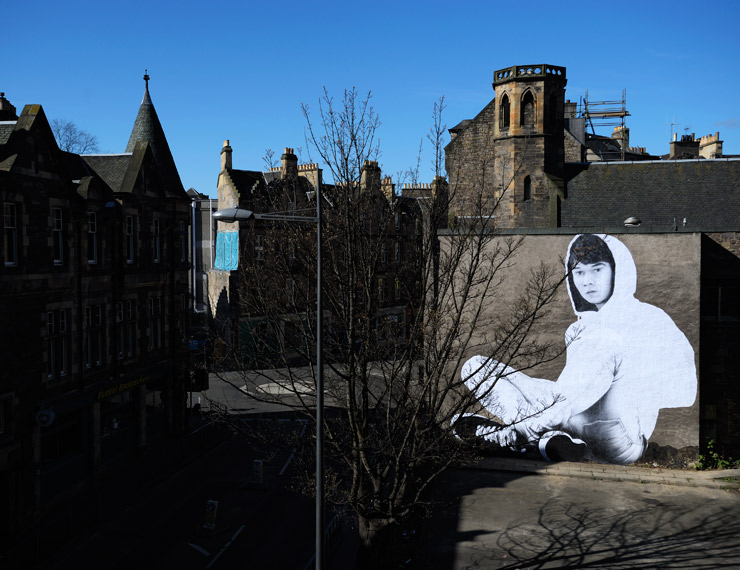 Street Artists like JR have made big impressions recently, plastering black and white images of everyday people on buildings and rooftops. But he is actually one of many artists since the early 2000s. His black and white portraits have joined a proud parade of many Street Artists like C215, Swoon, Fauxreel, Specter, Chris Stain, NohJColey, Jetsonorama, and Gaia and others who have been featuring portraits of real people from the hood for most of their street "careers", bearing witness to the stories of regular people who are normally dwarfed by the billboards.

Today we bring you an art project/social campaign by illustrator Joe Caslin in Edinburgh, Scotland that has the more focused and deliberate aim of re-positioning the maligned image of a segment of youth in the city. Smacking of the same sort of comfy classicism that keeps certain youth marginalized in New York and elsewhere, recent trends in Edinburgh have begun to demonize an entire generation of youth, particularly boys, using collective guilt by association and insidiously damning methods of generalization about their appearance. 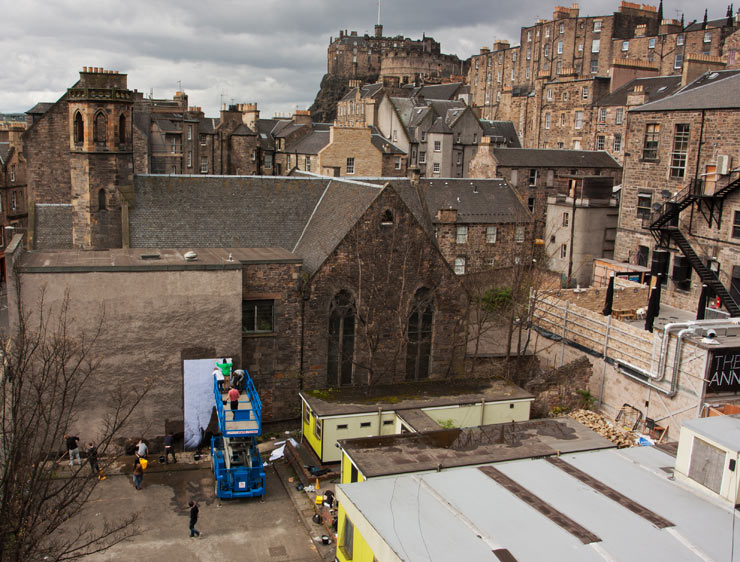 "This generational group is openly ridiculed and demonized," explains Caslin. "By using words such as NED (Non-Educated-Delinquent) and CHAV (Council-Housed-And-Violent) we continually push young people out of society and slowly beat them into apathy."

With this Street Art campaign, the faces of the youth are brought back to the street to claim a right to it. Of the discrimination and misinformation that is creeping in an obviously dangerous direction, Caslin has a simple goal, "I want to change this."

Caslin enlisted the help of a group of "young lads" in the local area, creating portraits of them that have been plastered all around, some as high as 40 feet tall, in the historic capital of half a million. The hope is that the size and poignancy of these wheat-pastes can compete with commercial messages and certain societal mischaracterizations. 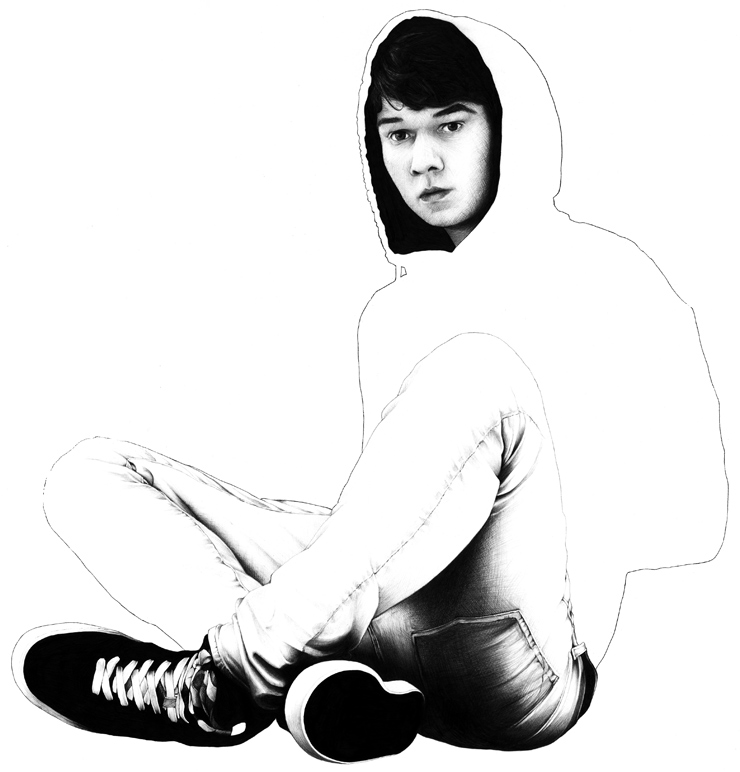 "When you're walking around town you see these great big billboards with pictures of celebrities or models for big brands and it will be good to see a giant image of a normal teenager in a hoodie," says one of the young men who participated in the project entitled "Our Nation's Sons." "It's good to have like a normal person on such a huge scale."

Caslin, a recent Edinburgh art school graduate, has had some success getting support for the project from local police organizations and from the Edinburgh City Council. So that is good news. But the boys have a more realistic experience on the street. "People generally want to keep certain people out of the view," says Andreas, another one of the subjects of the huge portraits, reflecting on the extent of the problem that he hopes to impact.

Of the pervasive nature of discrimination, another participant named Kieran says: "People make assumptions the minute they see people -- about what they're wearing or how they talk. It seems that after a while you start feeling that way too."

With their "Our Nation's Sons" Street Art campaign, these guys may restart the conversation in a way that opens opportunities, instead of shutting them off. 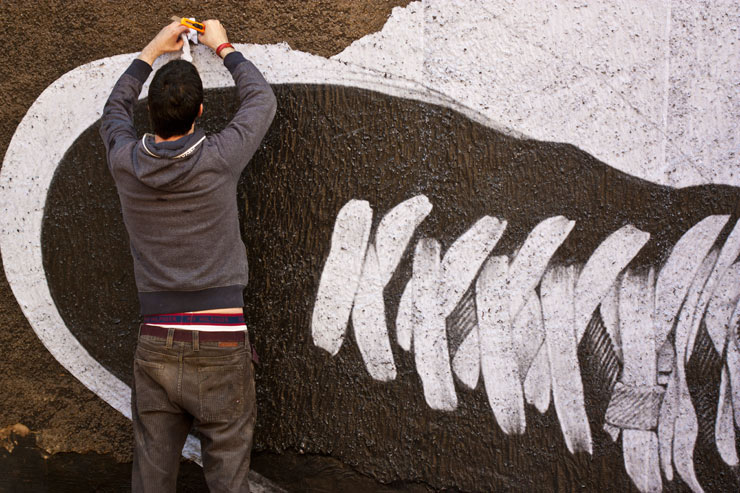 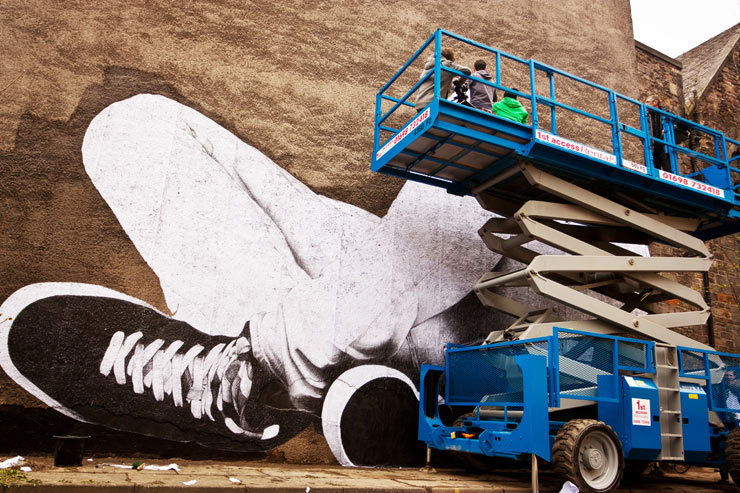 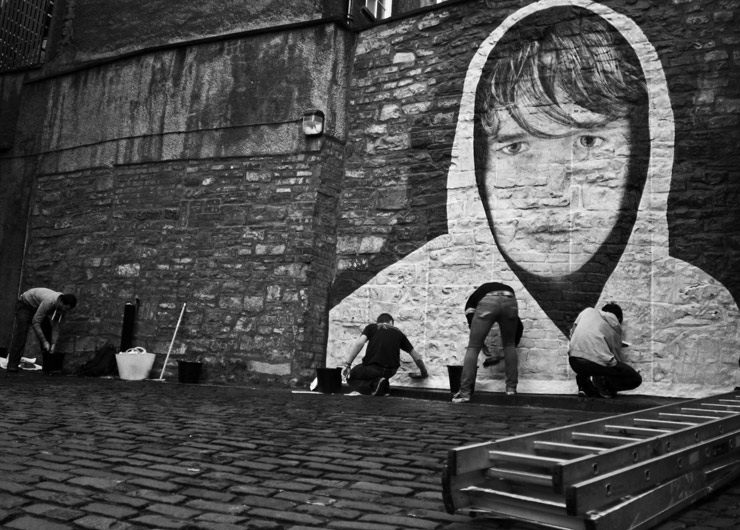 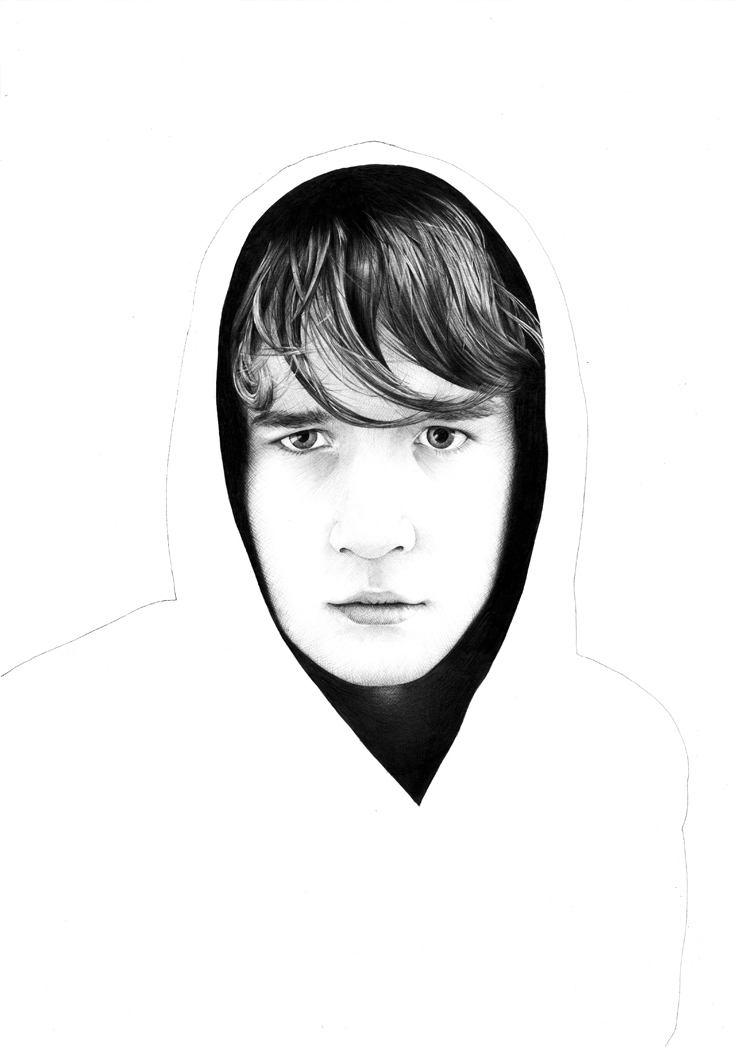 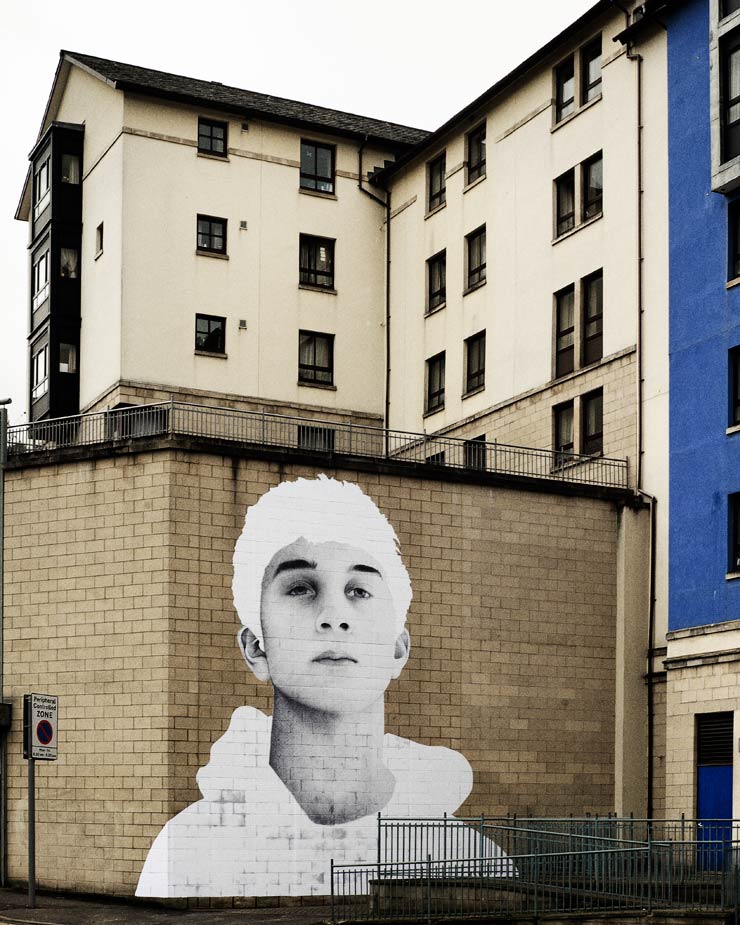 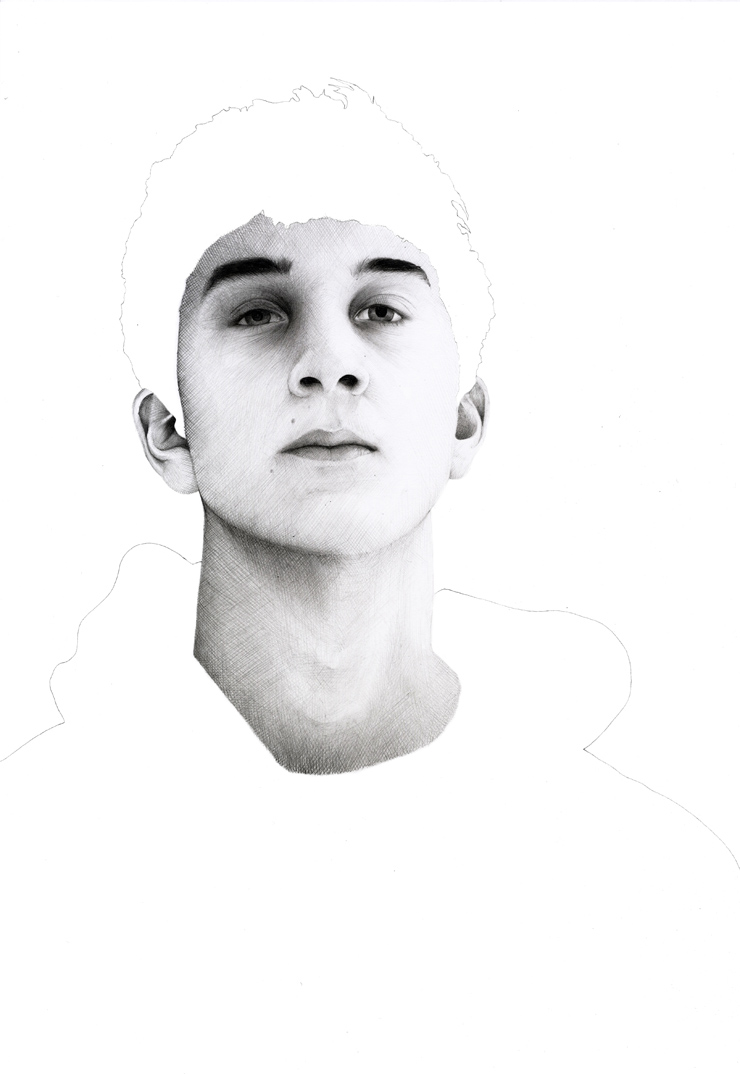 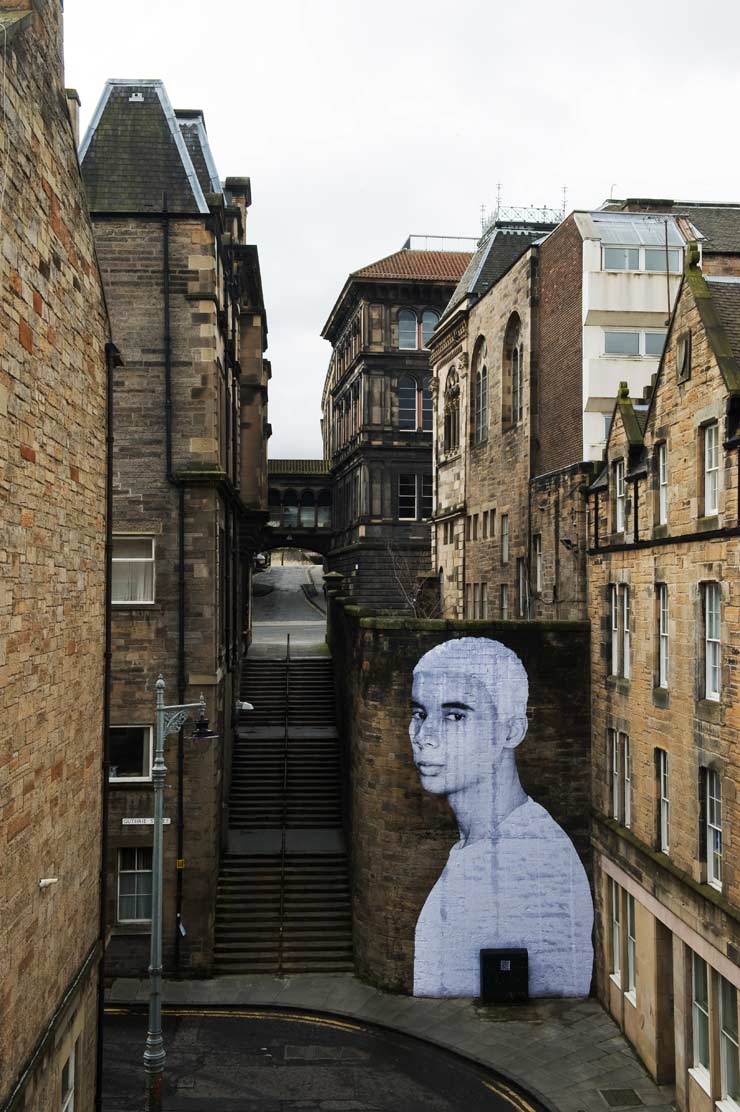 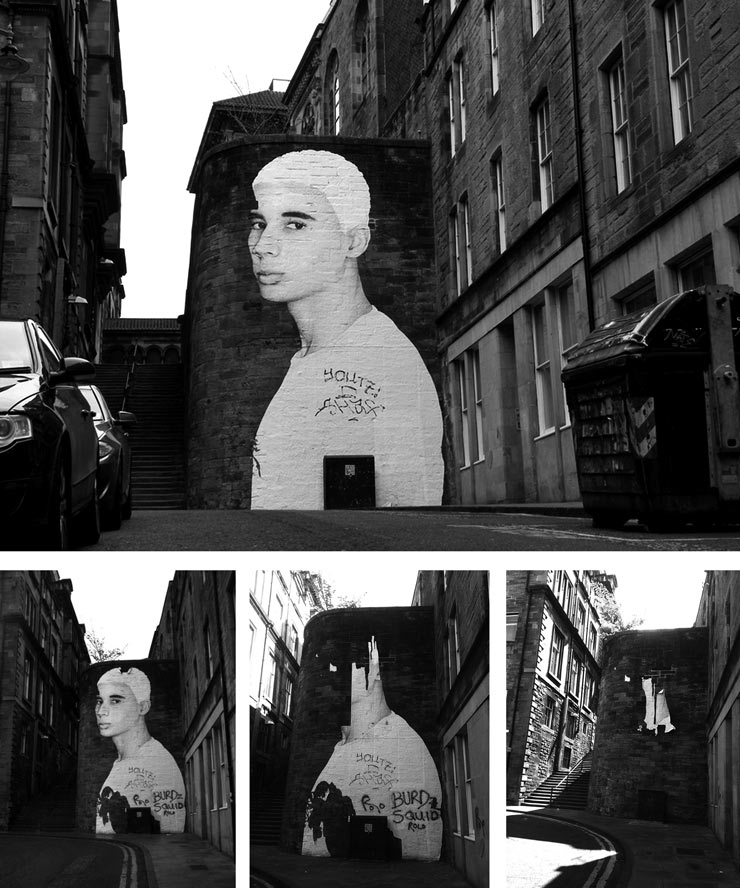 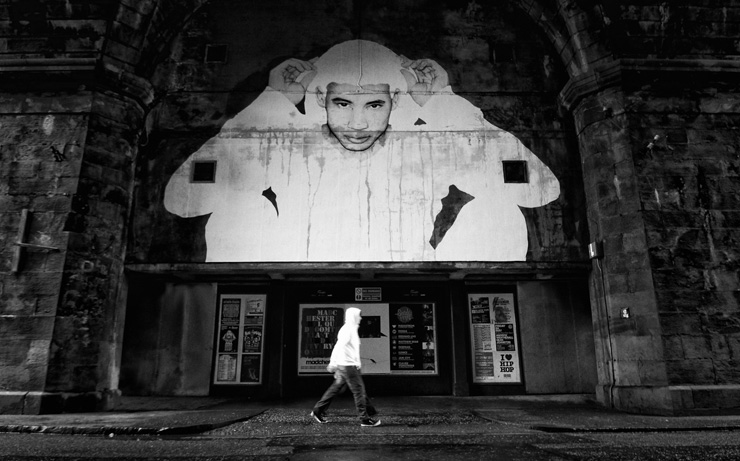 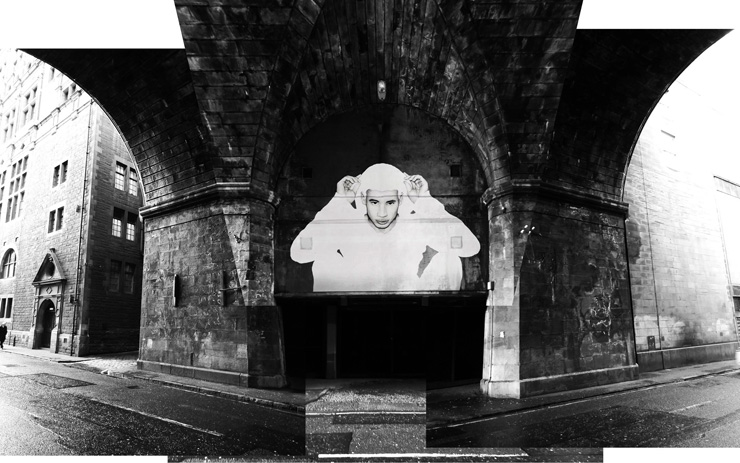 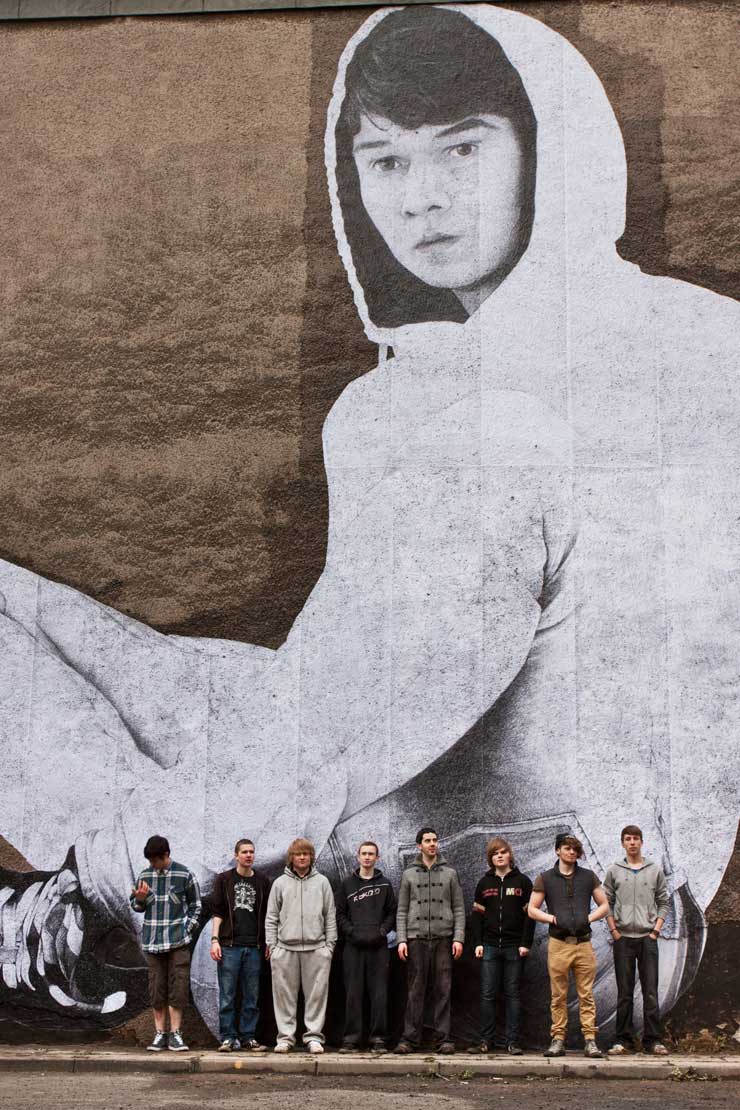 Joseph Caslin. The Sons. Luke is behind, larger than life. (photo © Courtesy of Joseph Caslin)