Fact: Joe Manganiello looks good without his shirt on.

He's already captured millions of hearts as hunky werewolf Alcide on HBO's hit show "True Blood," but Manganiello is more than just a pretty face and rock hard abs. He's a classically trained actor who studied drama at Carnegie Mellon, he's done more Shakespeare than fans would suspect, and he's been getting nude in front of audiences long before he was cast as Alcide.

"When I was in college, I did an Off-Broadway show where I was full-frontal on stage, so I guess all of these crazy parts have been coming my way for a long time," Manganiello tells The Huffington Post.

But what happens when you have that much testosterone in one film? Whatever happens, Manganiello isn't feeling the pressure--after all, he's the one getting naked on a weekly basis on "True Blood." By all means, he's an old pro and dropping trou.

"I'm the one coming from 'True Blood,'" says Manganiello. "It's not that different from what I do on set on 'True Blood.' I wonder if some of the other guys have done it before--taken their clothes off on camera. For me, it's just a typical day at the office."

"We had some dance classes at Carnegie Mellon, actually," says Manganiello. "The actors had to take jazz and ballet, and we had extensive moment for four years. It's not something that I'll go out on the weekends and do in my free time, but if you put a gun to my head, I'll be alright."

However, don't expect Alcide to be busting a move anytime soon. The only move he'll be making is on Sookie. With only two episodes left in the season, many "True Blood" fans are wondering what's going to happen between the werewolf and the Southern fairy, who seems preoccupied by her own blood-sucking ménage à trois.

"They really dangle that carrot," says the actor. "Alcide is really starting to change. You see that alpha wolf start to come out of him--for better or for worse--and that was something that was really exciting to play. With Debbie back on the V, you'll start to see that escalate and boil over, but Sookie and Alcide haven't had their final moment yet."

And while you would think that Manganiello's biggest struggle would be sculpting his body to look like a werewolf with superhuman strength, that was one of the easier parts of Alcide to control, says the actor.

"What made the character extremely tricky for me was the dialect," confesses the Pennsylvania native. "I'm not from Mississippi, but I play a guys from Mississippi, so I think for the first year of 'True Blood,' I was very self-conscious about the dialect. That was a little daunting in the beginning because I didn't want to offend anybody. I recently saw a movie about these guys from Pittsburgh, and they sounded horrible. They didn't sound like they were from Pittsburgh at all. It really pissed me off."

Manganiello will also guest star on a January episode of Bomer's USA show "White Collar"--sans the Mississippi accent. He recently wrapped filming on the episode, where he will play an ex-con who moves across the street from Peter (Tim DeKay) and Elizabeth (Tiffani Thiessen) as the series’ new villain. For Manganiello, filming with his friend Bomer felt like old times.

"He used to come over to my mom's house for Thanksgiving back in college," Manganiello says of Bomer. "It's just amazing to think that 11 years outside of drama school, we're still going, and we get cross paths as many times as we get to this year. It's so awesome to have a friend out there, somebody that I've known before any of this happened. It's nice to know that we can be a sounding board for each other because along with all of the work comes a lot of pretty outrageous stuff. It's nice that we can check back in with each other as our lives completely change because we both know what things were like before."

In addition to playing a hot werewolf, hunky stripper and a badass ex-con, Manganiello will also add another prime role to his resume: "the coolest guy in the universe." He will appear in next year's star-studded film adaption of the classic pregnancy guide, "What To Expect When You're Expecting." Manganiello just finished filming the project in Atlanta.

"My character is the coolest guy in the universe, in a nutshell," says the actor. "There's this support group of dads that hang out in this park, and they come to the park to push their strollers and wear their baby bjorns and talk about how cool their lives used to be and aren't anymore. My character always runs through the park to do his chin-ups and his workout routines. He's completely single and unencumbered and he travels the world as a surfing photographer. He bangs all of these hot chicks, and these guys just think he's the coolest guy ever. So he ends up hanging out with these guys, but I will say, that his world-traveling single lifestyle does eventually catch up with him."

And while it seems that most men would love to be known for their dashing good looks, Manganiello tells The Huffington Post, "Be careful what you wish for."

"It's tricky when I'm constantly traveling and adjusting to new timezones and trying to also keep up with my workouts. I decided that between 'What To Expect' and 'Magic Mike' I was going to take a week off where I didn't work out, I didn't have to punch the clock at the gym and I got to eat whatever I wanted--so the first thing I ate was fried chicken and waffles."

The chicken and waffles binge may be over, but Manganiello seems okay with it.

"The fact that I've said yes to a part named Big Dick Richie is hilarious to me," says the actor. "When I first started acting it was "Merchant of Venice" and all of these Ibsen plays and turn-of-the-century drama, so the fact that I went through all of that training and now I'm known because I flash my butt on screen, that's hysterical. It really does make me laugh, but who cares? I'm having more fun than I've ever had acting in my entire life right now."

There's just one more thing on Manganiello's bucket list: to play a superhero. A few months ago, the actor was in the running to play the revamped Man of Steel in a "Superman" reboot. However, due to conflicts with his "True Blood" filming schedule, Manganiello lost the chance to play the famous red-caped hero.

"We took this turn in cinema where leading men got soft. When I was growing up, it was Clint Eastwood, it was Harrison Ford and Steve McQueen--these guys were tough. They were leading men, but they were also tough and physical. Somehow we got away from that, and it was like these two things needed to be separated, but I don't think they do."

But while Christopher Nolan and "The 300" director Zack Snyder may have found their "Superman" in Henry Cavill, Manganiello is holding out for a much darker superhero role.

With a role like that, he might not be able to eat fried chicken and waffles again for quite some time. 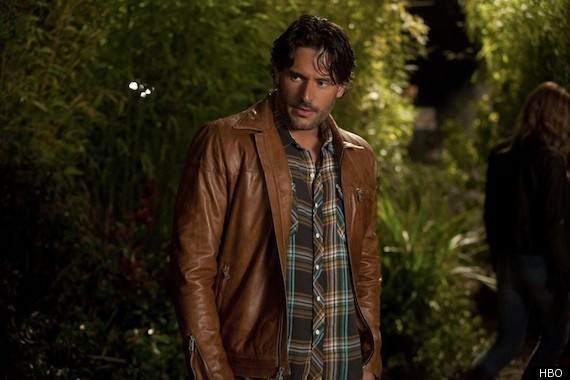