As of Thursday, Miller holds a narrow 1,668 vote lead over Murkowski in the GOP Senate primary. However, thousands of absentee ballots cast in Tuesday's election have yet to be counted. The Anchorage Daily News reports that those additional ballots could take a week or two to be tabulated.

But with the upstart Miller still holding on to a razor-thin lead, political observers are asking the same thing, who is this guy? Before Tuesday's primary, Miller made national headlines for earning the endorsement of former Alaska Gov. Sarah Plain.

On her Facebook page Palin suggested, "Alaskans are learning more about Joe." And so are we.

HuffPost has mined Miller's Web site and his media interviews leading up to primary day, plumbing the depths of his conservative -- and in some cases eyebrow-raising -- views. From advocating the need to "transition out" Social Security to suggesting that "hate crimes laws" violate the United States Constitution, here's a sneak peek at the candidate who could be on his way to becoming the next U.S. Senator from Alaska:

Joe Miller On The Issues: What He Has To Say About Guns, Hate Crimes, Social Security And Abortion
Alaska Candidate Joe Miller's Most Extreme Policy Positions 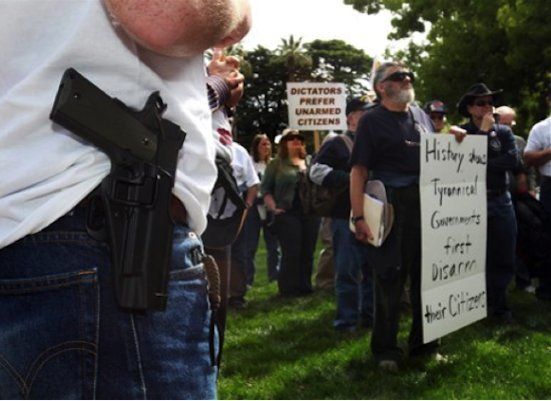 1 / 9
Guns 'Not Unusual In Political Rallies'
Miller's staunch support for Second Amendment rights should come as no surprise given the conservative nature of his views, as well as the fact he comes from Alaska -- a state where any individual who can legally own a firearm is able to carry it concealed and without a permit or license. Perhaps more surprising, however, is the lack of concern Miller <a href="http://blogs.abcnews.com/thenote/2010/07/senate-candidate-joe-miller-guns-not-unusual-in-political-rallies-in-alaska.html" target="_hplink">expressed</a> last month over guns and weapons being toted to political rallies. “It's not unusual to walk into a Wal-Mart, or to walk into a gas station, and see people carrying guns," explained the Tea Party-backed hopeful during an appearance on ABC News/Washington Post's "Top Line." "You know, it's not unusual in political rallies, it's not unusual in parades, to see that type of thing. Probably though, in the lower 48, it does raise some eyebrows.” The big twist is that the comments came on the heels of Miller, himself, sparking controversy after video surfaced <a href="http://www.politico.com/blogs/bensmith/0710/Guns_on_parade.html?showall" target="_hplink">showing</a> supporters of his campaign marching in a parade with handguns and even more powerful weapons.