Amid a political firestorm of controversy surrounding Alaska Senate candidate Joe Miller's ethics violations while working as a government attorney in 2008, new details emerged on Tuesday night revealing that the Republican hopeful himself admitted to lying about his complicity in the matter.

The remarks from Miller came to light in a 60-page dispatch of records released (PDF) by the Alaska borough after a judge issued a court order for the files to be made public.

Miller detailed the incident at the core of the controversy in the same e-mail to Broker disclosed in the documents:

Over the lunch hour this past Wednesday, I got on three computers (not belonging to me) in the office. All of them were on and none of them were locked. I accessed my personal website, for political purposes (participated in a poll), and then cleared the cache on each computer. I did the same thing on my computer. Jill asked the office what happened. I lied about accessing all of the computers. I then admitted about accessing the computers, but lied about what I was doing. Finally, I admitted what I did.

In a curious move made by Miller, attorneys for the conservative candidate's campaign moved to take legal action against the former Mayor over the matter. The Anchorage Daily News reported last week:

In recent weeks, the controversy related to the two-year old ethics violation made by Miller has proven to be a significant stumbling block for his campaign. In the face of pressure from reporters to be more transparent about the issue, the Tea Party-backed hopeful made every attempt to downplay the matter by evading the press. He also has suggested the ordeal was at least in part fueled as a political attack from the campaign of incumbent Sen. Lisa Murkowski, whom he ousted in Alaska's GOP primary and is now pursuing a write-in reelection bid.

Below, a copy of the letter sent by Miller in which he admitted to lying about his involvement of the controversy. Click here (PDF) to read 60 pages of documents in full released on Tuesday night: 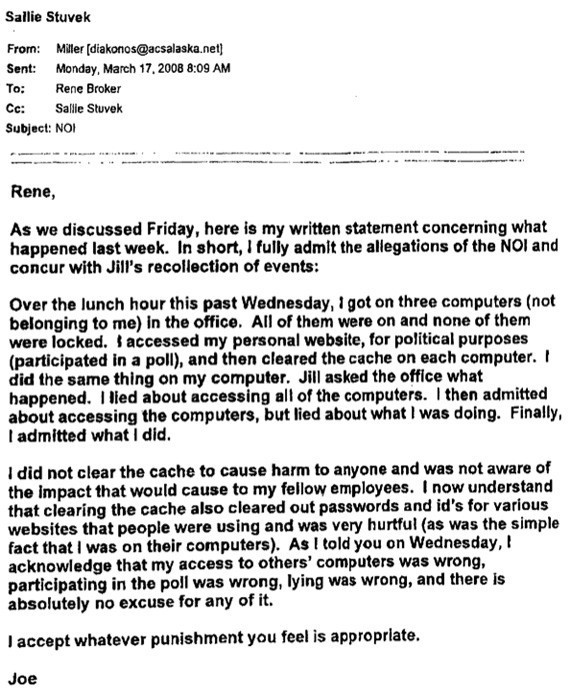