Joe Nalven, an artist/educator who teaches anthropology at the San Diego City College, is a man of many talents. He blogs at the San Diego Union-Tribune, and partnering with noted digital artist -- Jim Respess -- he is currently touring an exhibition he and Respess curated together.

The traveling show, entitled "Homage", is a group exhibition of digital works which have a very human touch. Nalven says this is important because the idea of "art in digital media... acknowledges the medium" for its artistic value, beyond the toolset.

It's an idea many new media artist seem to be embracing -- treating the digital applications as seamless natural aspects of artistic growth. And with his expertise as an anthropologist and scholar, Nalven has a special insight on how best to marry things seemingly impossible.

Nalven moderates the Digital Art Guild (DAG) website, and via email, he spoke with me in a interview, talking about the "Homage" exhibition, and a host of other fascinating topics. 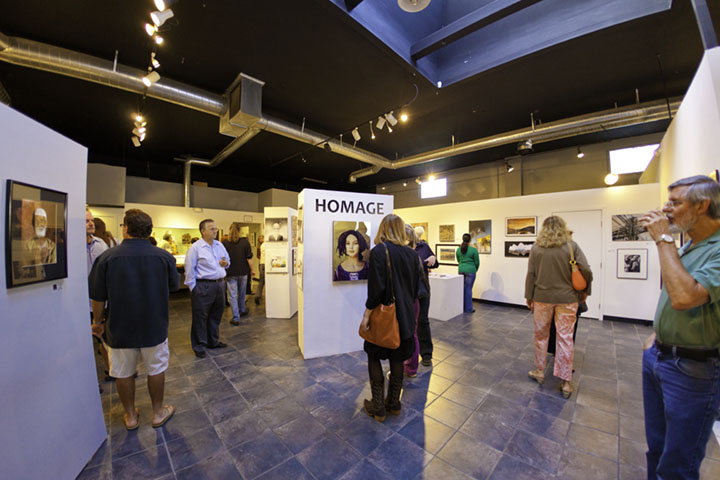 Max Eternity (ME): Together with Jim Respess, you recently curated a touring exhibition entitled "Homage." How did that come about?

Joe Nalven (JN): As one of the co-leaders of the Digital Art Guild, I've worked on putting on group shows in a number of ways. For our previous show, "Urban Legends and Country Tales," Jim and I selected three well-known artists from outside the Digital Art Guild. For this exhibit, Jim and I decided to take the lead, especially since we had a specific concept in mind. We wanted to continue building the bridge between artists working in digital media with the broad field of art-making. One way to do that was to create a conversation familiar to art critics, collectors, curators, the art appreciating public -- and artists too.

ME: You are, however, not just a curator, because when we first met, I was introduced to you as an artist. How long have you been an artist, and how do you think that shape's your thinking as a curator.

JN: I started out as a mixed-media artist doing cut-and-paste collages. I even painted the first banner the Yippies used... remember Abbie Hoffman? Curating requires listening to other voices and positioning them in a way that they play off each other. I doubt that my self as 'artist' neatly transposes into myself as 'curator.' Not in a way that I am consciously aware.

ME: Additionally, however, you're a professor of anthropology. I'm aware of this because you and I are working on a project together called ARThropology. Nevertheless, where and who do you teach, and could you also talk about how this particular aspect to your career -- anthropology -- gels with the others?

JN: I was more of an independent researcher that happened to find a way to teach classes. Currently I teach an adjunct introductory class in anthropology, but I also teach other occasional classes such as Cultures of Latin America, Urban Anthropology, and in related disciplines humanities, ethics, human nature, logic, image manipulation, lawyering skills, peace & justice -- ouch, my mind reels from the way we capture the human condition.

More interesting than labeling the classes I've taught is the connection between them. I recall one of my philosophy professors saying that while I asked interesting questions they were not very philosophical -- instead they asked how things came to be, developmental questions rather than analytic. Since then, and that was way back in the 1960s, both anthropology and philosophy have changed; there is more engagement across that once impervious divide.

How do these connect today -- in my art? That is something I've been zeroing in on in a much tighter way. Yes, there is the ethnographic fascination with how people look, how they engage in their daily routines, trying to move away from subjects smiling back at the camera. Our expectations as artists, as photographers, and as consumers, of what we expect in photorealistic portrayals is quite amusing.

ME: Are multiple converging careers the wave of the future... the new normal? In other words, can you imagine yourself only wearing one professional hat?

JN: I like that question. But I can only get to answer that if I believed in the transmigration of the soul and get to live my life again. I fear that it would be the life of an ant -- I have a memory of Joseph Campbell being interviewed by Bill Moyers talking about Vishnu and Eastern philosophy. That new normal might be a curse rather than a blessing.

I realize that you asked the question from the point of view of how Western culture has changed and expected a different answer. Yes, I've found myself with many others in a kaleidoscope of adventures (call them jobs if you will). However, I am pushing another sort of response than the sociological straightjacket conveys. If we take a spiritual/mystical perspective, all of those different jobs may be as exactly the same job -- the same straightjacket or the same opportunity. 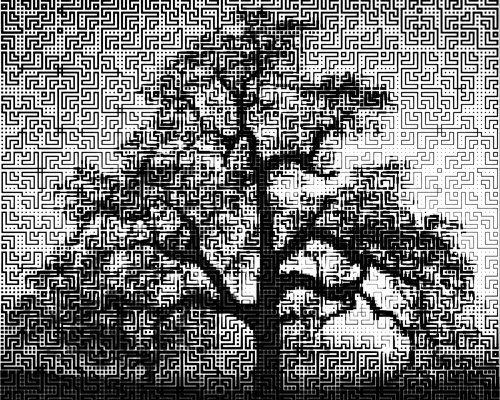 ME: What role does digital technology play in this?

JN: I have a photo of myself, leaning on my elbow with a manual typewriter at hand as I typed up my field notes. That gave way to an IBM Selectric in writing my dissertation. Now I use a word processor -- I even used the TRS-80 Scripsit with 48K memory. But these have been more a matter of convenience for me, especially in the cutting and pasting of words in the editing process. I am not unique in that regard.

But when it comes to my art, well, that is a different story. I had been a collage artist for many years, using a pair of scissors, a glue stick, pencils and magazine material. I was bothered by the cut lines that remained in my creations and saw this new tool, Photoshop, as a way of getting rid of those cut lines. I was also being pulled into having my own photo data bank of images. So, add digital cameras to the mix -- from the SONY Mavica with 27K images to my current Nikon with more than enough megapixels.

Being an editor of a webzine also allows me to communicate quickly with artists around the globe and to post their articles for the world community to tap into... digital technology has shaped my adventures in art for more than a decade.

ME: About 6 months back, I had an email exchange with Roger Malina, editor of Leonardo Magazine, who said to me that in reading some of my writings, it "reminded me how long it is taking the mainstream art world to really integrate digital and new media into their views.of the world." What are your thoughts on this? And is digital media the same as digital art?

JN: The unevenness in what is called "mainstream art" prevents a single characterization. But yes, I'm still waiting for a large chunk of that mainstream to yield to the digital and new media paradigm shift. That relates partly to the terminology: "digital art" is more abrasive in claiming to be an aesthetic and not just a toolset; "art in digital media" is a more seductive approach that simply acknowledges the medium.

I've just witnessed a shift that occurred with a changeover of museum directors in California, but what surprised me that neither acknowledged the shift.

I am aware that in some parts of the Los Angeles County Museum of Art that digital art has had a place, for instance Michael Wright, at Otis College of Art and digital artist who has been collected in various museums, has given workshops there.

ME: What, if anything, comes of all that, should prove interesting. Any final thoughts?

JN: I like to pepper my anthropology class with mind puzzles to keep their attention. Perhaps one of these puzzles would work here. Chuang Tzu, the Daoist, was walking with his friend and exclaimed, "See how free the fishes leap and dart? That is their happiness." His friend replied, "Since you are not a fish, how do you know what makes fishes happy?"

I'm not sure who the fish is in this parable, but we and the keepers of mainstream art are certainly puzzled about what makes the other happy. 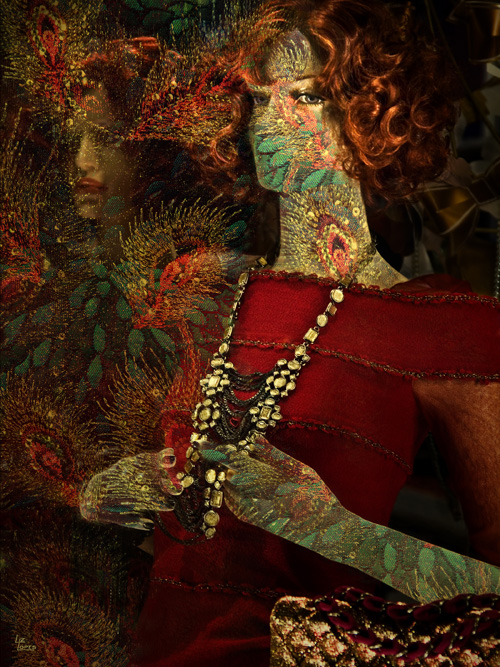 "The Sanction of the Cloth" by Liz Lopez (Image: Liz Lopez)

"Homage" runs through November 14th at the Art Institute of California-San Diego. On Thursday, Octoher 20th, Charles Schwab hosts a special exhibition of select pieces, and a reception. Contact Joe Nalven for details at: joe.nalven3@gmail.com.