American Muslim fans of the Chicago Cubs want strong action after revelations this week that the patriarch of the family that owns the team for years emailed racist jokes and Islamophobic conspiracy theories.

The email exchanges between Joe Ricketts, the billionaire TD Ameritrade founder and Republican megadonor who purchased the Chicago Cubs in 2009, and various family and friends reportedly contained language that portrayed Islam as a “cult” and painted Muslims as the “enemy.”

Both Ricketts and his son Tom Ricketts, the team’s chairman, have apologized for the emails, first published by Splinter on Monday.

But more has to be done to repair the now-damaged relationship between the Chicago Cubs and Muslim fans, Ahmed Rehab, executive director of the Chicago branch of the Council on American-Islamic Relations, told HuffPost.

“It is important that a beloved Chicago institution such as this does what is necessary to regain the trust of affected communities, and fans in general, and recommit to our collective principles of anti-hate and ‘everybody in,‘” Rehab said, referring to the Cubs’ 2018 slogan.

Rehab said CAIR-Chicago plans to meet with Tom Ricketts on Friday to explain how Muslim fans feel “rejected and isolated” by their team. He said he would like to see the Cubs take a strong stance against the “repugnant anti-Muslim beliefs” in Joe Ricketts’ emails.

“We will also discuss possible ways forward to fix what’s been broken and regain confidence, trust, and belonging,” Rehab said.

Joe Ricketts, 77, reportedly sold 34 million TD Ameritrade shares for about $403 million to purchase the Chicago Cubs. His four children are now co-owners of the team. The elder Ricketts is also an influential political donor who has spent millions promoting Republican candidates. He donated $1 million to Donald Trump’s 2016 campaign.

Ricketts’ son, Pete Ricketts, became the governor of Nebraska in 2015. Another son, Todd Ricketts, is the finance chairman for Trump’s 2020 campaign.

Daughter Laura Ricketts is an LGBTQ activist and Democrat. She sits on the National Leadership Council of Lambda Legal, an LGBTQ advocacy organization.

The emails in question date from 2009 to 2013, according to Splinter. The messages are chain emails containing numerous references to anti-Muslim conspiracy theories, such as the widely circulated myth that former President Barack Obama is secretly a Muslim. Joe Ricketts would apparently forward these chain emails to friends and family, sometimes adding his own (often bigoted) comments.

In an email responding to an article about “Radical Islam,” Joe Ricketts apparently wrote that Muslims are “naturally my (our) enemy” and that Islam is “dangerous element in our society.” In another responding to false claims that Obama favored Muslims over Christians and Jews, Joe Ricketts reportedly wrote that there is a continued “assault on Christianity in America.”

The emails also contained racist jokes about Latinx Americans and black Americans. In one, Joe Ricketts apparently wrote that he was “tired” of “Political Correct, Multicultural and Diversity aspects of our culture.”

Joe Ricketts appeared to have received some pushback from some who received the emails. In one, future-Gov. Pete Ricketts encouraged his dad to research the anti-Muslim claims on snopes.com before passing them on. In response, Joe Ricketts wrote: “Thanks Peter. However, I think Islam is a cult and not a religion. Christianity and Judaism are are based on love whereas Islam is based on ‘kill the infidel’ a thing of evil.”

Joe Ricketts said in a statement on Monday that he regrets and apologizes for “some of the exchanges I had in my emails.”

“Sometimes I received emails that I should have condemned. Other times I’ve said things that don’t reflect my value system,” Joe Ricketts wrote in the statement. “I strongly believe that bigoted ideas are wrong.”

Cubs chairman Tom Ricketts sought to distance himself from his father’s views.

“Let me be clear: The language and views expressed in those emails have no place in our society,” Tom Ricketts wrote in a statement obtained by ESPN.

“My father is not involved with the operation of the Chicago Cubs in any way,” he continued. “I am trusted with representing this organization and our fans with a respect for people from all backgrounds. These emails do not reflect the culture we’ve worked so hard to build at the Chicago Cubs since 2009.”

Rehab told HuffPost that he believes that Tom Ricketts’ apology is an “important first step” and that the chairman appears to be “genuine” in his outreach to local Muslims. He was more skeptical about Joe Ricketts’ apology.

“Many people are wondering if Joe’s apology is for these horrific views being leaked, versus being held for so long,” Rehab said.

Cubs fans who are Muslim have been expressing their disappointment about Ricketts’ emails online.

“I love the Cubs and I have loved them since 1983 and I have been with them through all the ups and downs and just as I want my children to be good Muslims, it is also very important that they grow up to be Cubs fans and enjoy their summers in Chicago at Wrigley Field,” Hussain wrote in an open letter on Tuesday.

He added: “Being a baseball fan can be heartbreaking in itself if your team doesn’t win the last game of the season, and it is heartbreaking to know that the team you have loved ever since you are a kid has sentiments linked to it in the way that was represented by Mr. Joe Ricketts.”

As a Muslim @Cubs fan, I had a few thoughts I wanted to share with the organization about the recent Joe Ricketts comments that just came to light. pic.twitter.com/UcGxt031xe

Rimsha Ganatra, another loyal Cubs fan, said Tom Ricketts’ apology was not enough. She suggested that Cubs host a Muslim American night at Wrigley Field, with halal food and prayers. The New York Mets put on a similar themed night for their Muslim fans last year.

“Before every game of the 2016 World Series I spent an extra 30 minutes praying for the Cubs to win,” Ganatra wrote in a tweet on Monday. “I went to a Cubs game last summer where Louie at the front gate met me with the traditional Muslim greeting and let me know to come to him if anyone gave me trouble for my head scarf.”

“These are the fan experiences I want for current and future generations of Muslim American baseball fans to encounter, not the views unearthed by Joe Ricketts today,” Ganatra said. 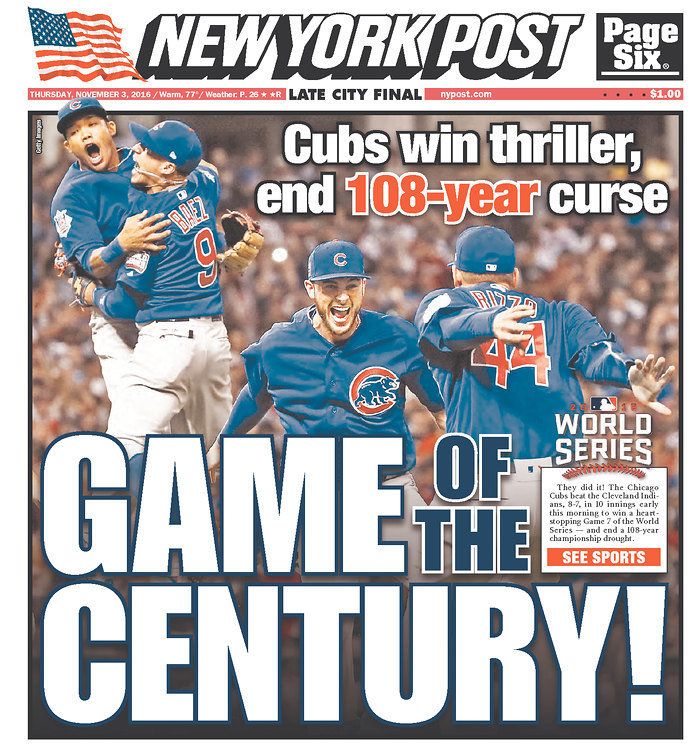 1 / 7
New York Post
Never one for subtlety, the NY Post actually made a pretty fair assessment: Game 7 was one of the most exciting finals in baseball history.&nbsp;
New York Post