After averaging more than three feature films per year between 2011 and 2013, director Joe Swanberg has decided to take it easy here in 2014. He has only one film currently scheduled for release this year, "Happy Christmas," a Sundance Film Festival premiere available via on-demand services now before beginning a limited theatrical release on July 25.

"I've attempted to make filmmaking into a normal, working class job," Swanberg said during an interview with HuffPost Entertainment at the end of June. "I've tried to turn it into a nine-to-five."

The difference, though, is that Swanberg is punching his clock next to movie stars. "Happy Christmas" has Anna Kendrick in the lead role and features supporting turns from Lena Dunham, Melanie Lynskey, Mark Webber, Swanberg himself. (Swanberg's young son, Jude, plays his character's son.) The film focuses on Jenny (Kendrick), a listless young woman who comes to live with her brother Jeff (Swanberg) and his wife, Kelly (Lynskey), after a difficult breakup. Over the Christmas holiday, Jenny forms a bond with Kelly, clashes with her older brother and falls in love with the music of Joel Alme, a Swedish artist whose songs are featured heavily on the "Happy Christmas" soundtrack. ("Nothing has sounded like that since Bob Dylan or something," Swanberg said of Alme's excellent, high-production 2010 album, "Waiting for the Bells," which is available on Spotify.)

Swanberg, who turns 33 next month, spoke to HuffPost Entertainment about "Happy Christmas," why men are out of ideas and how this new feature was born out of his own personal family experiences. 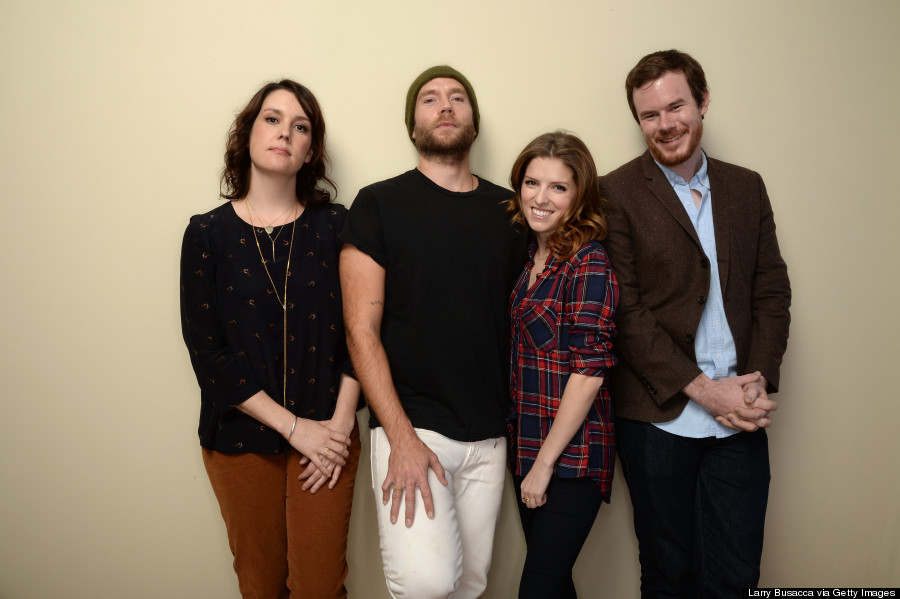 This is a different role than people might expect from Anna. Why did you think she'd be a good fit?
On "Drinking Buddies," Olivia Wilde really surprised people because nobody had seen her do something like that. With Anna, while we were shooting "Drinking Buddies," and as I was getting to know her as a person, I was feeling that she was doing variations on a sort of Type-A, very put-together character. "Up in the Air" was so successful that it carried over to who she was playing. She was really good at that, so it makes sense. But I sort of knew that she would be really good at any movie she did. It felt fun to think of the most opposite of her "Drinking Buddies" character. Anna actually seems so much older in "Drinking Buddies" than she does in "Happy Christmas," even though we shot "Drinking Buddies" first. You actually see her digress a couple of years.

Yeah, it's a shock when we find out Jenny's in her late 20s as opposed to early 20s.
My brother lived with my wife and I when we first moved into that house. It's sort of based on him. I don't want to throw him under the bus and say everything in the movie comes from him, but it's based on that feeling of being in your 30s and starting your own family, but also having this younger sibling who is understandably figuring the things out that you already know. He should be doing that, but at the same time it's annoying. As you get older, there is this feeling of "just figure it out."

But in the film, it feels like your character is really giving Jenny the benefit of the doubt.
I'm curious to talk to people about how they relate to that. For me, it's really true to life. I'm very non-confrontational with my brothers, even when they annoy the hell out of me. We talked about it a lot on set: you get used to the ways people fuck up and they stop fazing you as much. For Melanie's character, it rang true that she would be more surprised by Anna's behavior and a lot more upset by it, and I'd be like, "Yep, that's Jenny. I've known her my whole life. She's like that." Those kind of family dynamics are interesting to me. When you choose to call people out, it's a bigger thing if it's your sibling.

"Happy Christmas" focuses on a woman in the throes of arrested development, which is a character that has traditionally been portrayed as male. You kind of did that in "Drinking Buddies," too. Why is it important to you as a storyteller to flip that script?
I'm really interested in it. I suspect we're on the cusp of a time where women's roles in the entertainment industry are about to get a lot bigger. My feeling is, and this is a little grandiose, that men are out of ideas. We need women to step up in a big way over the next 10 years or we're fucked culturally. We see what's happening right now, which is that we're just remaking, rebooting and re-franchising everything. That's because we're out of ideas. So if anybody is bringing new ideas to the table, they are really valuable right at this moment. Lena Dunham is obviously is bringing a lot of new ideas to the table, which is why people are responding to that in a big way.

Lena participates in that great scene with Melanie and Anna where Melanie's character, Kelly, talks about the challenges that come with being a mother.
A lot of "Happy Christmas" came out of conversations my wife and I had about her own identity issues when she became a mom. It's very hard for women, and it's not talked about at all. So a lot of the impetus for making "Happy Christmas" was just to get that conversation on screen. It's almost as if the movie's framework is built around the chance for them to have that conversation. To air those feelings. I don't know that I've seen that kind of conversation before.

I don't know if I have.
Isn't it shocking that in 2014, there's a movie where nobody can remember ever seeing a mom talk about the frustrations and pleasures of having a kid and being a mom? I think there's "Baby Boom" in the mid-'80s. There have been stabs at it, but they haven't felt real. The circumstances have always been inflated in a big way. There's a lot of pressure women are under right now, because none of the old conventions have gone away, but there's an expectation to work and be independent. There's internal pressure too, to do both things. From the moment Jude was born he just had a different relationship with my wife than he did with me. That's biological. You're not going to escape that. He needs her for sustenance. We can change that with science and with baby formula and maybe we can do a lot of things, but right now, he wanted her in ways he didn't want me. That put a lot of pressure on her that it didn't put on me. So she didn't choose that; it was handed to her.

In the movie, your character could have easily turned into a jerk, but you keep him sympathetic, if a little disengaged. I liked that.
He's guilty of being oblivious. Which is bad in a relationship, but he's not a bad guy. I'm guilty of it too. You get caught up in work -- especially with my wife and I. One of us had to make money and that ended up being me. There was that pressure put on me that wasn't put on her, but it's also really shitty to not be in charge of the money that your family is making. It's very nerve-wracking. I was going out into the world in this attempt to provide, and she was having a really weird identity thing happening at home. She's also a filmmaker, but suddenly when people asked what she did, stay-at-home mom had to be added to the descriptor. I don't think she ever thought those words would come out of her mouth. It was sort of a trip. We were in a weird time, and I think both of us got into our own stuff. We weren't communicating a lot of that. She was quietly suffering and I was quietly freaking out. That's not good.

You were one of my favorite filmmakers on Twitter. Why did you quit?
I was spending too much time on there that's why. It was getting in the way of being productive, which is the main reason. Beyond that -- I don't know if this happens to you -- but it was rewiring how my brain works. I was finding myself in life experiences where my immediate reaction was how to craft a tweet out of it. I thought that was too far. I don't want to witness something incredible, feel something deep and then my immediate feeling is how to do I capture that in 140 characters.

I liked how you weren't afraid to speak to truth to power to popular films. I didn't agree with some of your critiques of "Gravity," but I appreciated reading them.
I miss that too, to be honest. That was the fun part of it for me. The conversation that it sparked was a different kind of conversation than I was having with a lot of strangers, which was really cool. That's a nice way to communicate. I wish I had better self control, I would still be on Twitter. But also, as a filmmaker, it's complicated for me to have a critical voice in the conversation. Because I understand the practical difficulties of making a film and they don't always turn out like you want. For me to have a negative opinion about something is almost a little more hurtful, because it's not my job. I'm just choosing to voice my negative opinion. But I also don't want to be the kind of person who is only championing and rah-rah'ing stuff. It's hard.

Looking ahead, you have "Digging for Fire" up next, which reunites you with Jake Johnson after "Drinking Buddies." What do you get out of him that other directors don't see?
I'm obsessed with him. I would say that he's my main collaborative and creative partner right now. It's hard for me to think of movie ideas that don't involve him. I'll quickly say what I like best, which is that he had the privilege -- and I'm sure it was frustrating for him over the years -- to live a lot of life before he got famous as an actor. He brings an incredible depth and wealth of human experience and knowledge to every character he plays, because he didn't have any spotlight on him. He just got to have a lot of jobs, he got to know a lot of people, he got to be a guy, he got to be a husband, and then he got famous. I relate to that. We're the same age. He's from Chicago. I've never had more fun writing with somebody, and I've never laughed harder on set than with how he chooses to be funny. You should expect to see a lot of him in my work.

This interview has been edited an condensed.