Samuel Joseph Wurzelbacher, a.k.a. "Joe the Plumber," is the topic of the day on the campaign trail, in part because he held an impromptu press conference Thursday morning in front of his house to discuss tax policy, his disdain for Social Security, and his critiques of Barack Obama.

Already, however, there is some dispute as to whether or not Wurzelbacher was being accurate with his critique of Obama. His business, as ABC reports, would almost certainly get a tax cut under Obama's plan, given that he does not expect to make anywhere close to $250,000 in profits.

Moreover, for someone worried about his taxes, Wurzelbacher doesn't -- it appears - always pay them. A filing with the Lucas County Court of Common Pleas shows that he has had state tax liens filed against him, meaning he was either delinquent or didn't fully cover taxes that he owed.

A representative at the court explained that Wurzelbacher had not paid $1,182.98 of personal income tax. The state filed a lien on January 26, 2007, and the payment remains outstanding. But the court rep also cautioned that this all may have occurred without Wurzelbacher's knowledge.

"We get hundreds of state liens every day and we don't have to make a judgment on them. We are just putting in there what the state says is owed. We don't notify that person and neither does the state. If there was activity on this lien, if they attempted to collect it on this case - which they haven't -- it would show up. But I am 99.9 percent positive that he doesn't even know about this."

Tax-issues aside, the "Joe-the-Plumber" fervor seems to be spreading beyond small town Ohio. On the streets of Manhattan this morning, a plumbing company car was spotted with a "Joe The Plumber For President" poster on its side. 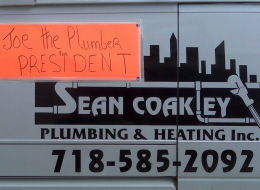 But before Obama supporters fret about losing the plumber vote, it's worth noting that the United Association of Plumbers and Pipefitters has endorsed the Illinois Democrat, in part because the union thinks he has the best economic agenda for its members.

"Obama will help us keep existing jobs and work to develop new, higher paying jobs here in America, reform our health care system, fix our ailing schools and make sure that the pensions of our retirees are safe," the union said.

PoliticsJoe the Plumber
Go To Homepage