Many viewers will see the new CBS show The Great Indoors as a comedy.

Some of us, however, know it's really a tragedy. 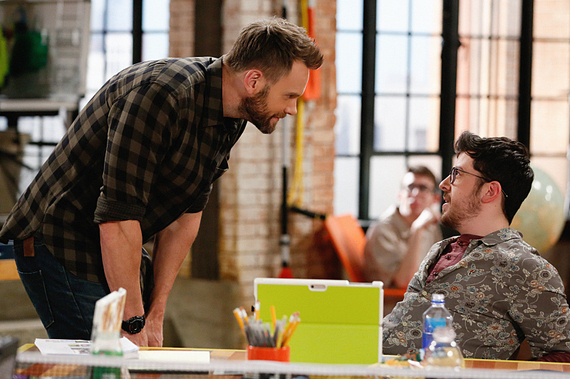 The Great Indoors, which premieres Thursday at 8:30 p.m. ET, brings back Joel McHale (above) as Jack Gordon, a writer for Outdoor Limits magazine. He comes to the office one day to learn the mag is dropping its print edition and going "web-only."

That's not the problem. The problem is that in the web-only world, outdoor writers don't actually go outdoors. The staff that is now running the operation, a handful of self-assured, blithely oblivious millennials, thinks an outdoor adventure is walking two blocks to a different Starbucks to get better wi-fi.

All stories are written in the office on electronic devices, by people whose research consists entirely of Internet searches.

So instead of sending Jack to Alaska to report on a wilderness trip where one might see a grizzly bear, the staff wants to spit out a quickie titled something like "Five Things To Do If You Run Into a Bear."

Jack suggests they really only need one item on that list: "Die."

Needless to say, the new Outdoor Limits staff incorporates all the signature stereotypes of millennials.

Clark (Christopher Mintz-Plasse) is the alpha research geek, convinced he knows everything about this planet and others even though he has never left the city. 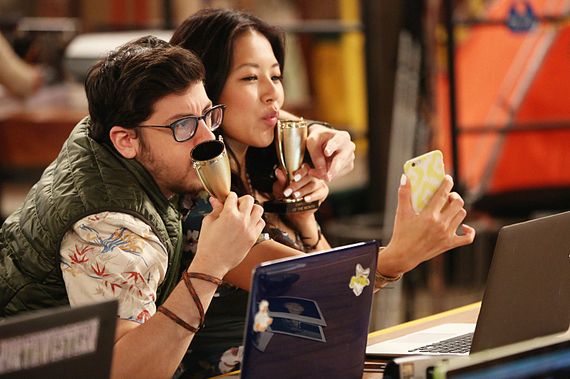 Emma (Christine Ko) (above with Mintz-Plasse) runs social media, meaning the only use she has for actual articles or information is that it occasionally can draw an extra click or like.

If you don't live on social media, Emma assumes, you don't exist.

Just for balance, The Great Indoors also includes some grownups who quickly become sitcom stereotypes of their own. 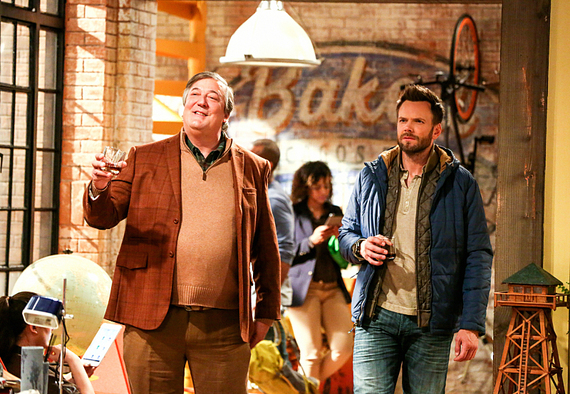 Roland, played by the droll veteran comedian Stephen Fry (above), owns Outdoor Limits. He's an outdoorsman himself, and has always valued Jack's superior writing. But he's been talked into joining the new world and seems to have pretty much written off the old one.

In his own way, he's as oblivious to Jack as the youngsters are.

Jack's immediate boss is Brooke (Susannah Fielding), Roland's daughter. Would it surprise you to know she and Jack used to date? Awkward.

The leadoff joke, logically enough, is that Jack declares it's preposterous to run an outdoor adventure magazine, web-only or not, where you replace actual reporting on adventures with flashy, attention-getting headlines that lead the reader into short gimmicky items with no substance.

The millennials don't see that as a problem. To them, at least at first, Jack is the problem. Why won't he get with the program? When does he think we're living, the Dark Ages? Who needs him? 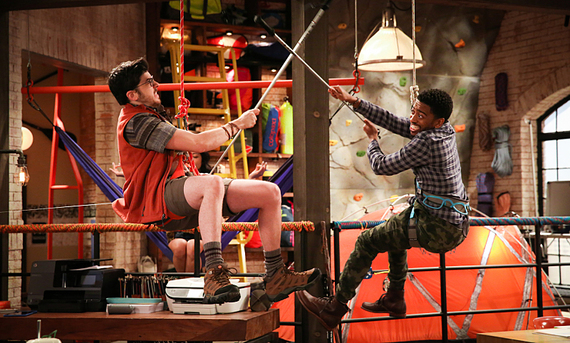 Happily they reach a truce, which saves The Great Indoors from being the shortest-run show ever.

McHale. a pro, conveys Jack's bewilderment and astonishment while making it clear he has a few quirks of his own. The millennial team dramatizes equally well their puzzlement that anyone would still want to run a magazine, or the world, the way it was run five years ago. Seriously, dude?

To the civilian viewer, it all adds up to funny stuff and good characters. How it will sustain, well, that's the question for every sitcom.

The only problem, which doubtless will seem most acute to those of us who have actually worked in media, is that whole swaths of The Great Indoors don't play like a light comedy. They play like a dark comedy. A very dark comedy.

We're way too close to a "Five Things To Do If You Run Into a Bear" world.

I could go on, but you'll have to excuse me. I'm going to take a picture of a cake, send it out on Instagram and call it a cookbook.