One dog and bun is 290 calories. Sixty-Nine is 20,010 calories -- more than the typical man should consume in a week.

It's a mammoth amount of food. If you stretched it out, one six-inch dog after the next, that's 34.5 feet long -- almost enough to form a belt around the Statue of Liberty. That's a perfect image for what Joey Chestnut plans to do Friday at Coney Island's 98th Nathan's Famous Fourth of July International Hot Dog Eating Contest.

But that's not what Major League Eating's No. 1 gurgitator wants to do. He hit that mark last year.

RELATED: This Is How You Eat 69 Dogs In Ten Minutes

"It takes six weeks for me to prepare for this contest," Chestnut says, and after each training session he fasts.

"I do a cleanse... a liquid diet, lemon juice, a little protein supplement, no solid food. Then, I make sure I go a little harder each time."

But how does he feel after eating 69 dogs and buns?

"It's the meat sweats," he says. "It's coming out of your pores for days."

The hardest food to eat? Ice cream, Chestnut says. "It's the brain freeze."

A total of 16 men and 12 women are expected at Coney Island this Friday. In the women's competition, Sonya "The Black Widow" Thomas is heavily favored. She set the record for ladies -- wolfing down 45 hot dogs and buns in 2012. That action begins on ESPN 2 at 11:30 ET.

An hour later, the men gather around Chestnut's table at Coney Island. Matt Stonie, the No. 2 ranked eater, is expected to go chew-for-chew with the champ. The 19-year-old has eaten 5.5 pounds of birthday cake in under nine minutes.

But does Stonie have a chance? Tune in Friday to find out. 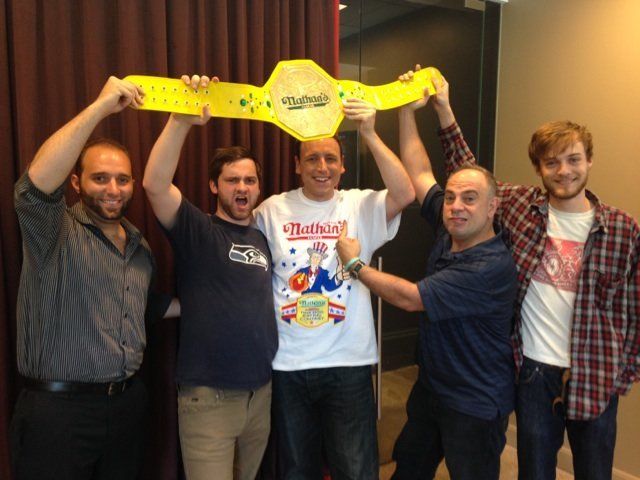