The Joffrey Ballet's 2012-2013 season opened Wednesday evening with a mixed repertory program aptly titled Human Landscapes. Forgotten Land, Pretty BALLET and The Green Table were offered to the audience at Chicago's Auditorium Theatre, along with a live orchestra to accompany the three works. 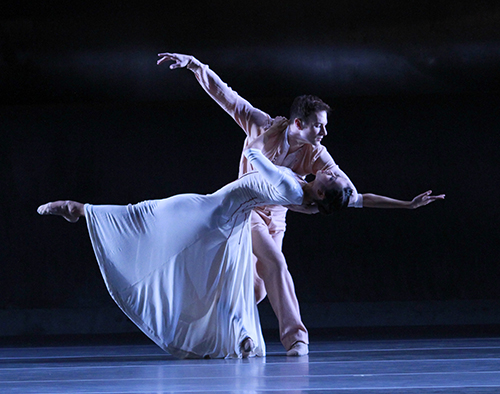 With its simple set and dancers clothed primarily in earth tones and varying shades of red, Jirí Kylián's Forgotten Land opened the program for the evening. Set to music by Benjamin Britten, the contribution that the musicians and conductor Scott Speck made to the atmosphere was immediately apparent. As dancers whirled across the stage in what seemed an endless series of lifts, the music punctuated both the timing as well as the tone of the piece. Performed confidently by the 12 dancers, with the exception of a few minor timing issues, it was a surprise to learn that the piece hasn't been done by the company since 1985. 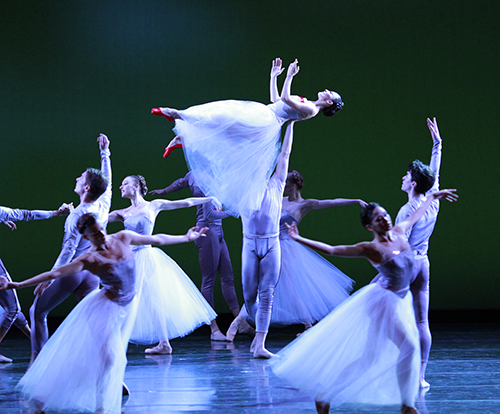 Next was Pretty BALLET by James Kudelka, which opened with Victoria Jaiani held in a striking, if unusual, pose -- high above the head of partner Miguel Angel Blanco. With white fog blanketing the stage, the simple, dream-like scene was interrupted visually by a pair of bright red pointe shoes.

The contrast of effortless beauty and diligent work is explored throughout this piece -- both concepts dear to the very heart of ballet as an art form. Denis Lavoie's fragile-looking white skirts lend a magical quality to the stage, while the plain gray tights and shirts worn by the men seem to depict the repetition, labor and practice involved in perfecting ballet movements.

Highlights from the four movements in Pretty BALLET included a magnificent pas de deux, which featured Jaiani and Blanco, and a complex and extremely well-executed sequence for five men, performed by Derrick Agnoletti, Raul Casasola, John Mark Giragosian, Graham Maverick and Ricardo Santos. The music by Bohuslav Martinů was brought to life by the Chicago Philharmonic, adding significantly to the overall impact of the piece. 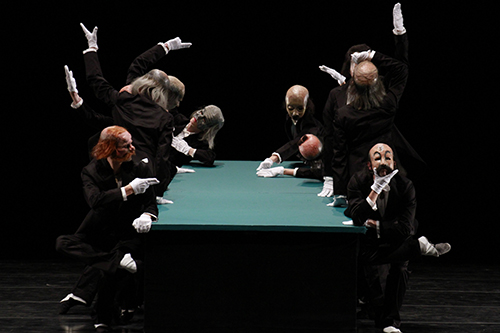 Always last on the program (by the specific request of choreographer Kurt Jooss) is The Green Table, a ballet that is interwoven with the very history of the Joffrey itself. Originally choreographed in 1932, the Joffrey was the first American company to perform this German expressionist work years later in 1967. A commentary on the fruitlessness of war, it is a powerful piece illuminated by costuming, gesture, music and nuance.

The ballet opens and ends with a group of diplomats who are gathered around a large green table. Clad in wonderfully crafted masks created by Hermann Markard, this is a political gathering that could be taking place anywhere, at any time. At the outset of the ballet, negotiation gives way to argument and the scene helps to set the stage for what is to come; battles, war and, eventually, death. 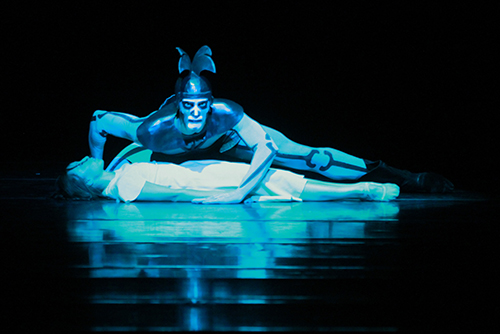 Death is a strong character in this ballet, and it seems as if dancer Fabrice Calmels was born to play this role. With his large frame costumed in frightening skeletal imagery the mere sight of him is imposing, whether he is marking time before he collects the next body or is claiming someone from the battle ground of war. Other standout performances include April Daly as The Old Mother and Temur Suluashvili who seemed to have boundless energy as The Profiteer.

The costuming by Hein Heckroth certainly adds to the haunting atmosphere of this ballet -- especially since the scenery is, for the most part, absent. Frederick A. Cohen's music gives the choreography another dimension, especially because of the dual piano work of Paul James Lewis and Mungunchimeg Buriad, which was incredibly powerful.

The entire company danced well here, and there were many strong characterizations and striking moments. As a ballet, The Green Table is only as good as the care taken to preserve its symbolism and structure, and that was done with a wonderful attention to detail by the Joffrey Ballet at all levels.

This piece first appeared on 4dancers.org