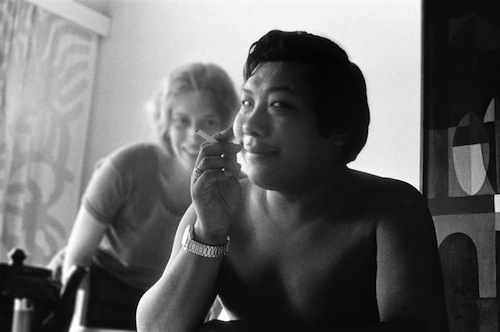 "Although I live in the slime and muck of the dark age ... in the thick black fog of materialism ... the time of hell on earth ... I still aspire to see your face." Chogyam Trungpa, Rinpoche

The words above were written by Trungpa Rinpoche in 1968, part of his Sadhana of Mahamudra. And yet those same words, about greed and the lack of true spirituality, could be referring to today's world, right here right now. Filmmaker Johanna Demetrakas opens her upcoming documentary Crazy Wisdom: The Life and Times of Chögyam Trungpa Rinpoche, about the eccentric Tibetan Buddhist guru Chogyam Trungpa, with this unorthodox mantra of his and of course, within seconds had me hooked on her cinematic testament to an extraordinary man. One who could speak so clearly to my own heart, even across time, space and the beyond.

Demetrakas was lucky enough to find herself smitten at a live seminar called "Battle of the Ego" given by Trungpa in Los Angeles and has said that he "blew my mind." She continued "he always created a feeling of stark reality, compassion and biting humor at the same time. Being in his presence was like being suddenly aware of an oncoming truck: it put every cell in your brain SMACK! into the present moment" and her film thoroughly succeeds in doing the same for her audience. While watching it, I scribbled down so many pages of notes I could probably write a thesis on her poignantly touching movie but I'll try to condense my thoughts to do both the filmmaker and her larger-than-life subject justice.

Chogyam Trungpa was a man like no other. Recognized as the reincarnation of a Buddhist spiritual master at 18 months, he was part of the last generation of Rinpoches to be trained in Tibet. While escaping the Chinese authorities, on his way to India, he asked his traveling companions to keep true to a code of ethics that included never killing another human being, not even in self defense, and never stealing, not even out of desperate hunger. While some of the monks were murdered or died from the hardships encountered on the way, a few made it to safety, months later, under with his guidance.

But it was in the West, first in the UK, then in the United States, where Trungpa Rinpoche thrived. A Buddhist leader like no other, he was an apparent checklist of religious contradictions. A monk who drank, smoked, had sex, married a 16 year-old girl, cracked jokes in the Queen's English and traded his robes for finely tailored suits, he was initially deeply criticized by the Tibetan establishment. Yet today his teachings are hailed as groundbreaking by both eastern and western spiritual leaders, including the Dalai Lama himself. Quite a few of his followers and several experts on Buddhism are interviewed in the film, including Robert Thurman, Allen Ginsberg and Ram Dass.

His personal physician, Dr. Mitchell Levy, says in the film that Trungpa "taught by being a human being." The rebellious Rinpoche stressed that each individual should discover their own Dharmas of compassion and wisdom, which could have nothing to do with religion. There he was way ahead of his time, even ahead of our time actually, for this world where we spend lifetimes putting down each other's religious beliefs and customs instead of focusing on the positive, unitive aspects taught by all world faiths. Trungpa even shed his traditional monk robes early on because he felt that people spent too much time while in his presence taking those in, instead of concentrating on what he was actually saying.

Perhaps Trungpa Rinpoche's greatest insights lay in his critical, analytical view of Buddhism. He coined catch phrases like "Spiritual Materialism" which he felt moves some to feel more powerful (ego-filled) than others through the use of religious mantras and "Spiritual Greed" where certain students can boast about being "a disciple of..." instead of focusing on overcoming their own fears and finding their own enlightenment. He also said that with extremely spiritual beings there comes a critical moment in the enlightenment process where they either go crazy or achieve realization.

Whatever one takes away from Crazy Wisdom, filmed beautifully by Pablo Bryant (who happens to be Demetrakas' son), one thing is certain: Chogyam Trungpa is a spellbinding subject, one absolutely perfect to inspire a future generation of spiritualism, the kind that is profoundly needed in this present time of confusion and misalignment.

Crazy Wisdom opens on November 25th at the Rubin Museum of Art in NYC and on December 2nd at the Laemmle Theater in Los Angeles.