The words written across John Balmer's chest really fit him to a tee.

The 50-year-old was wearing a shirt that read, "Who Needs Drugs?" in big letters, with "Seriously, I Have Drugs" in smaller letters underneath when cops allegedly found him with a bag containing — guess what? — drugs in a Kmart in Hudson, Florida, according to TampaBay.com. 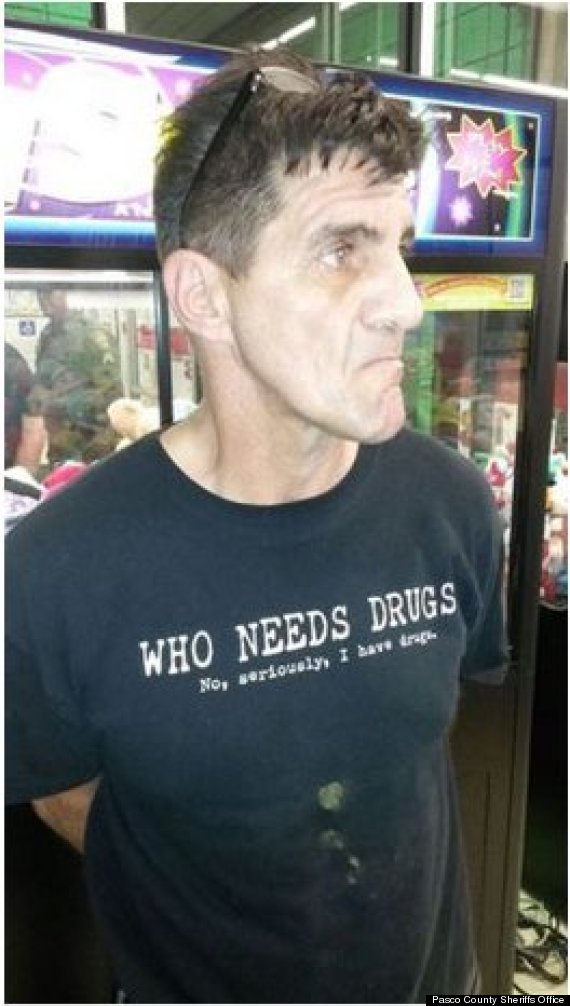 The ironic arrest occurred after a Pasco County Sheriff's deputy allegedly saw Balmer attempt to pass a plastic bag containing pot and meth to another customer on the checkout line, TBO.com reports.

When that person didn't take the bag, police said Balmer walked to another register where he allegedly placed the drug-filled baggie on the ground.

Balmer returned to pay for his items, but store employees informed officers about the bag. The officers picked up the bag and discovered the drugs, according to MyFoxChicago.com

There's a long line of suspects busted while dressed in Incriminating t-shirts.

In November, Deborah Delane Asher, 37, was busted in Kentucky for possessing meth while wearing an "I love crystal meth" T-shirt.

In October, Micah David Dailey, 20, of Cape Coral, Florida, was busted for possessing less than 20 grams of marijuana while wearing a shirt that said, "Go Directly to Jail," a phrase made popular via a Monopoly "chance" card.