WASHINGTON -- The U.S. House of Representatives split its first committee, Ways and Means, into two in 1865, creating the Committee on Banking and Currency and the Committee on Appropriations. Consistent with its new station, the committee was soon thereafter afforded the best piece of real estate on the House side of the Capitol -- three sprawling offices just off the House floor, with exclusive access to one of the building's biggest balconies and its breathtaking view of the Mall and the Washington Monument, which was completed just five years before the first Appropriations Committee chairman moved into the new office.

The panel had a good run, occupying the space for more than 100 years until John Boehner, a man who has never asked it for an earmark, became Speaker of the House. The word "spending" has become an epithet in Washington, and the panel's power is at its lowest point in its history. Boehner (R-Ohio) is seizing the opportunity and sharing the spoils with his counterparts in Democratic leadership.

There has long been a saying in Washington that there are Republicans, Democrats and appropriators. The appropriators are losing.

Leaders of both parties have long salivated over the choice office space held by the committee, square footage that is priceless in a building with little to spare. In Washington, proximity to power is measured sometimes in very concrete (and marble) ways: Holding the keys to that balcony and its attendant office space means power. Lobbyists who can score an invite to the balcony can demonstrate to clients just how important they are, how much access they have, because prime space in the Capitol is something -- unlike a 200-foot boat, an oak-paneled private jet or even a small island -- that money can't buy.

With his new title, Boehner had already won access to what's known as the Speaker's Balcony, which boasts the same westward view -- ideal for entertaining high-powered friends as the sun sets behind the monument. But that balcony is shared with the Senate. The appropriations porch is the exclusive domain of the House.

In a public-relations coup, Boehner accomplished his land grab while winning praise -- announcing that multiple offices would be relocating all for the purpose of installing a women's restroom adjacent to the House floor. The Washington Post dubbed the announcement a moment of "potty parity," and Rep. Virginia Foxx (R-N.C.) hailed the decision, saying it didn't "seem fair or equitable for the men to have a bathroom right off the floor and the women not."

Amid the celebration of his coming out as a gender-equality activist, what Boehner was getting out of the deal went unnoticed: the historic offices of the House Appropriations Committee.

Boehner rejects the idea that his motives were related to anything other than gender parity. "All of the office moves resulted from the decision to build a ladies' restroom right off the House floor -- which was a matter of respect for female Members of the House," Michael Steel, Boehner's spokesman, told The Huffington Post in a statement.

It's a fact that female lawmakers -- who make up 10 percent of House Republicans -- do not have a bathroom just off the House floor, while the men do. Women have to trek a few hundred yards toward the center of the Capitol to relieve themselves in the Lindy Claiborne Boggs Room off of Statuary Hall. While the men's room is just steps away, it took a HuffPost reporter, walking at an average clip, about one minute to get from the floor to the ladies' loo.

The new women's restroom will be going in H-211, a relatively small office just outside the east doors to the Speaker's Lobby, currently occupied by the House Parliamentarian. The parliamentarian will be moving across the hall to H-210, which is traditionally a ceremonial space used by the speaker.

Boehner is using his loss of the ceremonial office as justification to snatch the two biggest of the Appropriations Committee's three offices off the House floor -- on the west side of the Capitol -- H-217 and 218 -- right off of the Speaker's Lobby. The replacement office he is appropriating is several times larger than what he's giving up, before even mentioning the balcony.

There was little the leaderless panel could do to stop him. The land grab was made before chairmen were selected, and Rep. Hal Rogers (R-Ky.) was making a bid for the chairmanship despite his nickname "The Prince of Pork." The last thing he could afford to do was battle Boehner over office space.

Not only is the new space bigger, it includes an extra hallway, storage area and kitchen as well as the spacious balcony. A photograph from the Library of Congress' archives, depicting committee members on the balcony in the early 20th century, portrays the balcony much as it looks today: 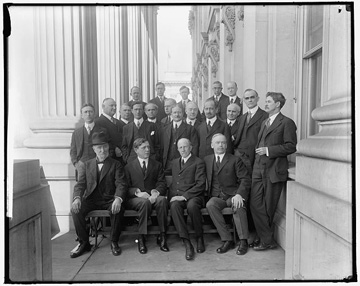 The man in the hat is Joseph Cannon, the powerful former speaker and namesake of a House office building. Here's an image of the space, with the entire top strip illustrating the committee's balcony (which measures approximately 12 ft in width and 80 ft in length):

There's no doubt that the appropriations committee space -- especially the balcony -- is prized. Arguably, the sweeping view it provides of Washington is priceless. After all, political fundraisers are illegal in the Capitol, so moneyed interests aren't able to simply pay thousands of dollars in order to attend a reception in the space.

There'll be no ticket to the balcony with a lobbyist or corporate CEO marked with a face value of "$1,000,000," but power works in more sophisticated ways than that in Washington.

It's essentially a given that powerful lobbyists and corporate representatives will be schmoozing on that balcony. Boehner is well known for his friendship with K Street's finest. As The New York Times reported in September, "He maintains especially tight ties with a circle of lobbyists and former aides representing some of the nation's biggest businesses, including Goldman Sachs, Google, Citigroup, R. J. Reynolds, MillerCoors and UPS. ... Some of the lobbyists readily acknowledge routinely seeking his office's help -- calling the congressman and his aides as often as several times a week -- to advance their agenda in Washington. And in many cases, Mr. Boehner has helped them out."

On Wednesday, a group of Boehner staffers were admiring H-217 and 218 while the rooms were undergoing renovation, and the staffers were literally, it appeared from the hallway through the open doors, measuring the drapes (or at least the gracefully arched windows).

One former House Appropriations staffer said that Boehner's decision to move the committee to a less prestigious location may also be a symptom of how he views the role of appropriators.

"There's been a long line of appropriators in leadership," said the former aide. "Boehner is not. He's never liked appropriations. ... The appropriators are the guys who do a lot of the work and see themselves as a little separate."

"Boehner comes from the outside of that," the aide continued. "So clearly, there was an opportunity -- and they took it -- for them to knock the Appropriations Committee down some pegs. Just like the way they cut the size of the committee. It actually took a bigger budget cut than all the other committees, closer to 10 percent than 5 percent. Just across the board, they did a lot of subtle things to reduce the influence of the Appropriations Committee."

Regardless of Boehner's motives, building a new women's room will cost taxpayers dearly. Replumbing a historical building like the Capitol is no cheap job, even if Boehner can find non-union labor.

According to a senior Democratic congressional aide, when Democrats came to power in 2007 -- and chose Nancy Pelosi (D-Calif.) as the first female Speaker of the House in U.S. history -- they investigated the same project and determined it would be too expensive.

An earlier renovation of the men's restroom off the House floor to make it wheelchair-accessible, done under Speaker Dennis Hastert, cost approximately $126,000, according to the former Appropriations aide. Legislative Branch Appropriations Chair Debbie Wasserman Schultz (D-Fla.), working with Pelosi's office, calculated in 2007 that constructing a women's restroom would cost, at the very least, 50 percent more -- approximately $200,000.

Additionally, because there is no existing plumbing in that area of the Capitol -- along with the level of delicate work required, given the historic nature of the building -- the costs would likely be significantly higher than the initial estimate.

Eva Malecki, a spokeswoman for the Architect of the Capitol, said they are currently going through design plans for constructing the restroom, which won't be finalized for several months.

So what happens to the House Appropriations Committee staff? They didn't fare quite as well. They moved up to H-307, which was previously part of the space occupied by House Majority Leader Eric Cantor (R-Va.) when he was minority whip.

When asked by The Huffington Post if it was just as nice as the old area, one aide sitting at the front desk harrumphed and pointed out that it was about half the size as the traditional space on the second floor. Another staffer noted that it's quite noisy because it's in the "hallway that they shuffle all of the tourists through to get to the gallery." Indeed, the view from the new office is no longer of the expanse of the Mall, but an endless stream of cargo shorts, t-shirts and, yes, fanny packs.

In a final shuffle, House Minority Whip Steny Hoyer (D-Md.) and his staff, needing a work area now that H-307 was occupied, were put on the first floor, acquiring in the process not only office space that previously belong to the committee and its subcommittees, but a meeting room used by Appropriations (H-144) -- call it hush space. While less visible than the second-floor area, it was prized, according to one staffer, for containing original paintings by the famed historical painter Constantino Brumidi.

A Hoyer spokesperson said that the decision to rain new square footage on the minority leader was made by Boehner. But the upgrade for Hoyer, who was himself once a powerful appropriator, makes the number-two House Democrat less likely to complain about the heist.

And besides, Hoyer thinks of himself as a future speaker, not a future Appropriations Committee chairman, so it's in his future interest to let Boehner do the deed. "You basically had a leadership takeover, by both parties," said one Appropriations staffer. "Hoyer got the first floor and Boehner got our second floor."

The Appropriations staffer added thankfully that the committee was at least able to keep H-216, which is the chairman's office and beloved by the committee.

"It would have been a really big deal if they had grabbed 216 ... That one is actually called the James Garfield Room -- James Garfield being the only Appropriations chairman to go on to be president," said the Appropriations aide, noting that the room is watched over by a humongous portrait of Garfield. "So if they had taken that, that would have been pretty crushing."