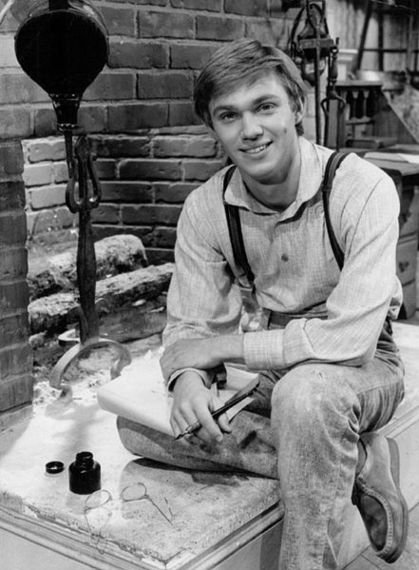 Richard Thomas as John-Boy Walton from the television program The Waltons.

As a writer and former English teacher I sensed this. But now, science agrees with me.

Yes, it's official. The New York Times says we learn more and express ourselves better when we write long hand.

In her article entitled What's Lost as Handwriting Fades, science writer Maria Konnikova summed it up this way:

"Children not only learn to read more quickly when they first learn to write by hand, but they also remain better able to generate ideas and retain information. In other words, it's not just what we write that matters -- but how."

How do we know for sure?

Dr. Karen James, a psychologist at Indiana University featured in the New York Times article, used a scanner to observe brain activity in children as they wrote, traced and typed.

She discovered that free hand writing lights up three areas of the brain -- the left fusiform gyrus, the inferior frontal gyrus and the posterior parietal cortex. When we type or trace letters, there is much less activity.

While this may be news to many educators and parents, many of us who write professionally -- or just for the love of it -- have suspected all this for a very long time. Though now forced to do a great deal of our writing with computers, many of us discovered our love for words by writing long hand.

I call it the "John Boy syndrome," that yearning to curl up with an old fashioned writing tablet, a ballpoint pen or even that old No. 2 pencil to write to your heart's content. As I writer, I can literally "feel" the difference between the writing I do "by hand" and writing I do strictly via computer.

So can some agents and editors. In fact, I've begun to see submission guidelines from both that suggest writers try writing long hand more often. A trend? No.

There are far more agents and editors who will only accept electronic submissions. And very few writers have the time or desire to type or dictate that hand written tome into a digital version.

But I've taken to printing out my fiction and writing the corrections and any idle thoughts that bubble up in the process in cursive. That one extra step seems to unlock a door somewhere -- ideas flow. And I return to the keyboard rejuvenated -- I can't type fast enough.

As an old school English teacher, I even had my students copy notes from the board in cursive. I found that they retained more of what they wrote that way. And they were usually able to write with more confidence and complexity than peers who composed by computer alone.

Yet, cursive writing isn't even part of the Common Core after first grade. And I meet more and more young people who know nothing about it -- they don't even have a cursive signature.

Do they need one? Probably not. It's a digital age.

But now we know exactly what they're missing. And why it matters.

So go get your John Boy on. Write something, or to someone, long hand. And feel those doors open.