Kentucky men’s basketball coach John Calipari has been widely praised -- as well as vilified -- for his “one and done” approach to college basketball: Bring in the best high school players for a year, prepare them for the NBA and then let them go get paid.

While the NCAA has pushed back against the idea that college basketball has basically become a one-year pit stop for future NBA stars, Calipari apparently has no problem calling a spade a spade. He did so during remarks on Wednesday.

“Last year we started the season with a goal. You may think that goal was to win the national title, win all the games," Calipari said at the Alltech REBELation conference, where he was awarded Alltech’s 2015 Humanitarian Award. "It was to get eight players drafted."

“We had a historic year, fell short of a national title, but seven players will be in the draft this year,” the coach said, and if Alex Poythress didn't get injured, "we would’ve had eight," he added. 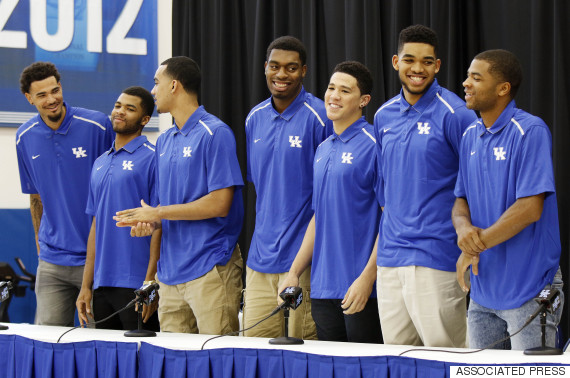 Calipari boasted that since taking the helm in 2009, 26 of his players have been drafted into the NBA. His academic stats? He said he's graduated “14 guys in six years” and the team has had a 3.0 GPA average for five years.

“You’re going to have a love of learning before you leave us,” Calipari said. “But you also have a chance to be drafted, number one, the lottery.”

The Wildcats enjoyed a 38-0 record until enduring an upset loss to Wisconsin in the semi-finals of the NCAA Tournament.

Calipari said while the team fell short of winning every game this season, it was still a historic year and the staff aimed to “make it about [the players] and not us.”