When I first met Joshua Lopez, I have to admit that I wasn't familiar with the case of his uncle, John Collado. Collado was shot and killed by an undercover NYPD detective in 2011. Collado's name isn't as widely-known as some others. Other victims of the police like Sean Bell, Amadou Diallo and Anthony Baez are perhaps better known.

Why was this? Collado's killing happened relatively recently in a long history of police killings many of us have been trying to get the nation to face. The details of Collado's killing, as described by Lopez and the Collado family, aren't any less outrageous than those which we instantly recognize.

Collado, a grandfather and father of a two-year old at the time, was in his upper Manhattan neighborhood when he heard a woman screaming about a fight. As Collado walked over towards what looked like two fighting men, he recognized one of them as his friend and neighbor. Collado grabbed the other unknown man's shoulder to intervene in what he thought was either a fight or a robbery. That man, plainclothes NYPD detective James Connolly, fatally shot Collado in the stomach.

Last Tuesday a large protest that charged through lower Manhattan, over the Brooklyn bridge and into downtown Brooklyn carried with it a huge sign that had the names and photos of dozens of police brutality victims. Names like Nicholas Heyward Jr., Shantel Davis, Oscar Grant, Rekia Boyd, Malcolm Ferguson and Mohammad Bah joined Bell, Diallo, Baez, as well as the more recent additions of Eric Garner, Akai Gurley and Walter Scott. A larger, if still not complete, list of victims is constantly being updated by the Stolen Lives Project.

Many of those names, like Collado's, aren't widely known but are essential to understanding the epidemic of police violence. 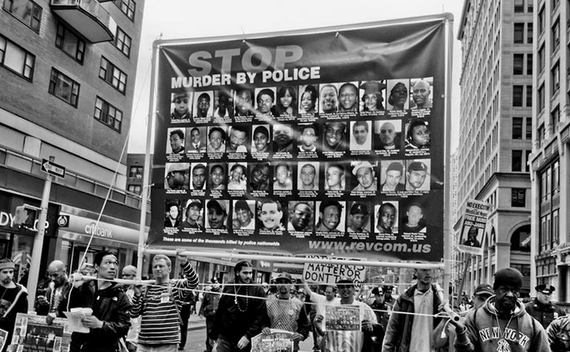 Lopez was at the march carrying a homemade collage of news clippings and photos of his uncle and other police brutality cases. He marched with Cornel West and Nicholas Heyward Sr. along with perhaps over a thousand people, taking over the streets and defying police barricades. As the police began to arrest, seemingly at random, a mix of activists and high school students, cops created a mosh and Lopez' leg was pinned between two police scooters.

His collage was torn apart.

The media covered the events largely, and predictably, through the prism of official accounts. "Anti-cop protesters mob the Brooklyn bridge" read the front page of the papers the next day. Reports also pegged the size of the march at about 400, which, as usual, was a gross underestimate. But the biggest takeaway for the media that night were reports that two police officers had been "assaulted" during a melee on the bridge.

If this sounds familiar it's because late last year during another police brutality march that crossed the Brooklyn bridge there was also a huge media-fueled scandal about cops that were "attacked". A grainy video of the encounter showed a scuffle between cops and protesters, but nothing close to the armageddon police officials had described. Still, a witch-hunt for protesters ensued as the focus around the demonstrations began to shift away from a long line of police-involved killings and towards the safety of cops. The shooting deaths of two Brooklyn cops towards the end of December stamped the cops-as-victims narrative firmly into the media conscious. Part of this is because clearly those two Brooklyn cops were in fact victims, but also because of a need to paint the larger body of protesters as the dangerous, bloodthirsty mobs that the most right-wing of media wanted everyone to see.

Lopez and the rest of the Collado family also remember John Collado as having been painted as an aggressor, even in death.

Cops insisted that Collado had put Connolly in a chokehold, and the media dutifully reported that account. Collado's family disputes that and their lawyers say surveillance footage disproves it. The media also brought up Collado's wrestling past, as if to rationalize the chokehold and assign Collado a more threatening description. But never revealed in the reporting was the fact that Connolly, a narc, had been the focus of a lawsuit over a 2009 shooting of a drug suspect. Or that Collado's niece, a nurse, was beaten and arrested for disorderly conduct when she tried to get to Collado after he was shot. Ultimately the scrutiny Connolly, who likely cowboyed past procedure in trying to arrest Collado's neighbor solo over some alleged marijuana, should have faced gave way to simpler story of tragedy--one where it was Collado whose behavior was instead called into question.

Sadly this type of shitty reporting isn't uncommon. It's the norm in criminal justice media where reporters almost always go with official accounts over eyewitness accounts. These reporters rarely bite the hand that feeds them and question authority only when it's painfully obvious the official 'facts' are far less than that.

The two cops that were assaulted during last week's march? One may or may not have had a plastic water bottle thrown at them. The horror! And the other was an off-duty cop who menaced protesters with a gun after he was allegedly punched when he got out of his car and began arguing with marchers. Of course the press ran full tilt with the "cops assaulted" story. They then pounced on Mayor Bill de Blasio's lightning-quick statement, fueled by their reporting, that condemned protesters and called for prosecutions--even as he called for investigations (which, he forgets, still have the potential to find no wrongdoing):

"Reports this evening that two of our NYPD officers were assaulted by protestors reminds us that here in New York City, violence or threats of violence against the police are unacceptable and will absolutely not be tolerated. These attacks will be thoroughly investigated, and we will urge the full prosecution of the perpetrators. And any other person who might use the right to peaceful protest as cover to initiate violence, cause mayhem or incite disorder - whether against the police, the people or property of our great City - should consider themselves on notice that New York City will not stand for it. Anyone who decides foolishly to engage in such destructive acts can expect a swift arrest and aggressive prosecution. As I have said before, such activity is beneath the dignity of New York City."

There were no grandstanding calls for prosecutions from the Mayor and few media reports over a video showing a police officer shoving a woman into a steel tree guard during the same march. Elsa Waithe, an activist with NYC Shut It Down Grand Central and copwatcher with Copwatch Patrol Unit, was filming cops arrest another protester when she was pushed, landing ribs-first onto the guard and ending up in the hospital. In the only undisputed and documented case of an assault that night, courtesy of New York's finest, there were no screeching headlines and only passing mention of an investigation and potential lawsuit.

Beyond the typical, callous behavior of the media is world where careers are dependent on access to power--which naturally modifies behaviors so as not to piss off power. Many have written on this. Law enforcement benefits from this just as much as it benefits when a cop escapes prosecution or indictment in the criminal justice system. The court of public opinion still influences us and is shaped by media, even as traditional media is slowly giving way to a more decentralized, social media oriented world.

This isn't to say new media still isn't blindingly white or deferential to power, but it has meaningfully democratized how we get information. Criminal justice media is still the worst, though. Predominantly white and male, especially up the editorial ladder, and supremely dependent on police and prosecutors for information, criminal justice media coverage is particularly twisted. Writer Daryl Kahn called it out last year during a radio interview but I've seen it firsthand in our campaigns against Bratton and the city council. Reporters, most of whom are unfamiliar with poor communities other than what they see on the police blotter, usually reprint official accounts and cover the broader politics like a soap opera: who's fighting with who, whose approval ratings are down, etc.

Missing most of the time are critical voices of those most affected: the poor, the marginalized.

John Collado, perhaps, isn't widely known because he was barely a blip on the media radar. For a short amount of time reporters and even some politicians shuffled over to his family to cover a headline, maybe a hashtag. However without the massive protests like those that made Mike Brown, Eric Garner and even Trayvon Martin nationally-recognizable names, Collado was just a byline for reporters. After that it's up to people to carry his name.

But perhaps it's also up to people to become our own media and get the facts out on so many of these cases. We're already creating media through filming the police, why not create systems that can carry that further? Citizen journalism wouldn't only boost copwatching efforts, it would only enhance journalism as an institution. Clearly those on the frontlines of police aggression are poised to better inform us of what's happening than a gaggle of white journalism graduates emailing their stories to their white editors hunched over a laptop at a Starbucks.

Gothamist (which I'll credit with doing some more interesting, independent reporting) followed up on the Collado case last month. The website, which struggled for years to be recognized as press by the NYPD, even included footage of an action marking Collado's birthday. He would have been 47. The action divulged information about his murder you'd be hard pressed to find elsewhere. You certainly won't find that type of information in the majority of an attention-challenged media that covers cases of police brutality and killings on a case by case basis.

John Collado's family is waiting on the Department of Justice to intervene in John Collado's case. They appealed to the feds in 2012.

Joshua Lopez, meanwhile, has made a new sign honoring his uncle and other victims of police brutality. 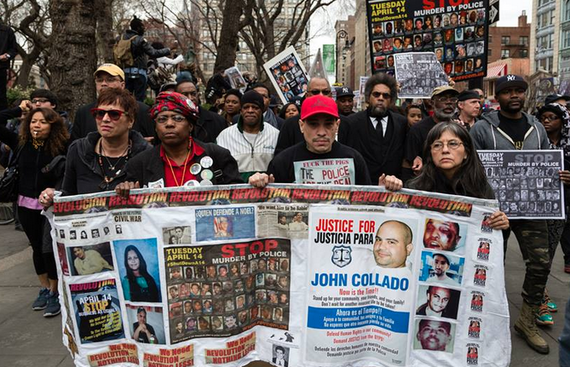 Joshua Lopez, in the red hat, with the sign cops destroyed.