Speaking in January at the American Library in Paris and then over dinner at Josephine's Restaurant, St. Jorre said his mother vanished when he was four years old, while they were living in London at the beginning of World War II. No explanation was given to him or his younger brother by his father or other family members. Silence prevailed. "It was if she had been swallowed by one of London's fogs, never to be seen again,"

St. Jorre told his audience, "I recalled being held by a young woman whom I believed to be my mother, a shard of memory that, true or false, would remain with me for the rest of my life. I clung to that memory." 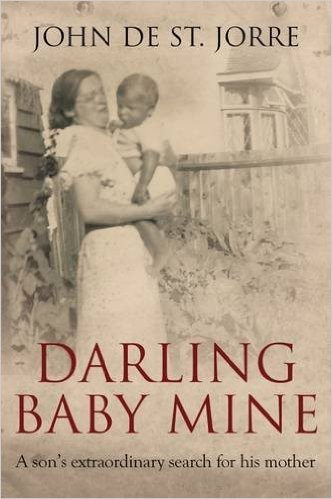 Unable to care properly for his children, St. Jorre's father, who traveled for his work, first placed the two brothers with the Linder sisters, who had not married but liked children. When St. Jorre reached seven years, his father moved the boys to St. Dominics's Priory. After several years of physical punishment, hunger and cold, his father who visited intermittently, returned and took them to their new home to meet Edith, who became their caring step-mother.

"Life definitely improved," he said, "but Edith followed our father's orders and would not discuss the fate of our mother. To avoid questions we told friends she died during the war."

"All of my leads came from women. Male relatives and family friends evaded my inquiries and kept their information to themselves. Especially the bureaucrat in the town Registrar's Office who held my mother's file in his hands but refused to even show it to me."

"He said I should ask my father." When I explained he had been dead for seven years, he responded, 'If your father did not tell you, he must have had a very good reason.' He closed the file.

"I wanted to strangle him. I tried to finagle it from his clerk but was unsuccessful."

"My father was helpful in one instance. I needed information about my mother for my application to MI6, the British Secret Intelligence Service for foreign affairs. Reluctantly, I was given my birth certificate. At twenty-four, I learned my mother's name was Grace."

I also learned the date and place of her birth and other background information. Hesitantly, I asked my father if she was still alive. 'I don't know,' he said, shaking his head as he left the room.

After his father's death, St. Jorre renewed his search. At first he moved cautiously. As he acquired bits and pieces of information, such as a photograph or letter, his need to know what happened to her became more obsessive.

Finally, a family friend led him to Olive, his mother's sister. He couldn't believe that after more than thirty-five years, he was going to visit his mother. She was alive.

What followed is revealed in the book, and no spoilers will be printed here.

The next evening at Josephine's (Chez Dumonet) Restaurant, St. Jorre compared the search for his mother to uncovering the real author of the Story of O. Unlike his more personal quest, which had few clues, his journey to uncover the true author of "O", had many leads, some true, some false. 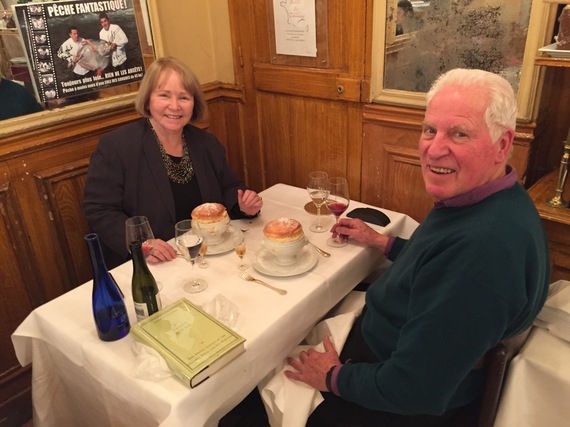 "After several research trips to Paris and numerous interviews, I eliminated a few predominately male candidates including Jean Paulhan, Aury's lover who was a prominent editor at Gallimard, because their writing styles were so different. It clearly wasn't Jean-Jacques Pauvert, her publisher, and he outright laughed when people suggested it."

"I knew that Aury, Paulhan and Pauvert were all very close friends. I concluded it was Aury even though others claimed the credit. She was a writer, editor, a very good translator and also worked for Gallimard. Her concise writing style from her other work was similar to "O".

"Not really expecting much, I wrote Aury a short letter, told her about my book regarding Olympia Press and asked if we could meet to talk about "O". I thought she wouldn't reply or would brush me off. Instead she wrote back and agreed to meet."

"We met in a small, windowless office at Gallimard. She was wearing a navy blue dress with a matching cardigan and a blue cravat that had a discreet red stripe running through it. She wore no makeup, and her only jewelry was a heavy gold ring in the shape of a scarab on her wedding finger." The gold ring had been given to her by Jean Paulhan, her lover. She had the demeanor of a librarian, not an author who had written the banned and scandalous Story of O.

"Aury was ready to talk about her controversial book. Her parents were dead, time had passed since 1954, and she was now eighty-six years old." In 1998, Aury died when she was ninety-one years old.

These letters became the novel Histoire d'O or Story of O, which has never been out-of-print and has been published in more than twenty-eight countries.

Paulhan handed the typed pages to Jean-Jacques Pauvert, the French publisher of the Marquis de Sade. Knowing the book would be provocative and probably prosecuted for being obscene, Pauvert published it anyway and was duly harassed by the police.

Leaning toward me, St. Jorre exclaimed, "After a lengthy interview, she admitted she was the author of "O." I had my story."

"Concerned about accuracy, the New Yorker wanted confirmation directly from her. Anxious that she might say no, I wrote Aury again. She invited me to visit her home near Paris, which Jean Paulhan had given her."

"As she talked I asked if I could tape our conversation. She agreed. She also let me take her photograph. That cinched it."

As we ate dessert, St. Jorre concluded, "The New Yorker was thrilled and we went ahead with the article, "The Unmasking of O," which received worldwide recognition."

St. Jorre's two quests, the one to find his mother, and the other to solve a literary mystery were each successful. If you have ever searched for someone or something, St. Jorre's book will motivate you to continue your quest before time runs out.

Mary Duncan is completing a new book, Love, Literature and Death on the rue de la Bucherie. If you would like to be on her mailing list, please send an email to ruedelabucherie@gmail.com