“It is with a heavy heart that we announce the passing of John David Dingell Jr., former Michigan Congressman and longest-serving member of the United States Congress,” said a statement late Thursday from the office of his wife, Rep. Debbie Dingell (D-Mich.). “Congressman Dingell died peacefully today at his home in Dearborn ... . He was a lion of the United States Congress and a loving son, father, husband, grandfather, and friend. He will be remembered for his decades of public service to the people of Southeast Michigan, his razor sharp wit, and a lifetime of dedication to improving the lives of all who walk this earth.”

Dingell was reportedly in poor health and in hospice care on Wednesday, according to the Michigan newspaper Monroe News. Debbie Dingell said she missed the State of the Union address on Tuesday to be with him.

“He is my love and we have been a team for nearly 40 years,” she tweeted Wednesday.

Friends and colleagues know me and know I would be in Washington right now unless something was up. I am home with John and we have entered a new phase. He is my love and we have been a team for nearly 40 years.

Michigan Gov. Gretchen Whitmer said Dingell will “forever be remembered as ‘The Dean’ of Congress,” noting his roles in passing the Clean Water Act, Clean Air Act, Medicare and the Affordable Care Act.

“We are a stronger, safer, healthier nation because of Congressman Dingell’s 59 years of service, and his work will continue to improve the lives of Michiganders for generations to come,” she said in a statement Thursday night.

An old-school Democrat, Dingell represented southeastern Michigan in the U.S. House of Representatives for 59 years before retiring in 2015.

Upon hearing of his retirement plans, President Barack Obama called Dingell “one of the most influential legislators of all time,” a sentiment he echoed when awarding the longtime congressman the Presidential Medal of Freedom in late 2014.

Dingell was diagnosed around a year ago with prostate cancer, his family said, and he decided not to treat it as it metastasized, opting instead for hospice care.

Over his nearly six decades in Congress, the spirited Dingell played a key role in advancing a slew of landmark laws, including the 1965 legislation that created Medicare, the Endangered Species Act of 1973 and the Affordable Care Act of 2010. Appreciated for his sense of humor and wit, he was also one of the last veterans of World War II to serve in Congress.

If he had his way, though, the legislative branch in which he served for so long would operate much differently: Dingell was a strong proponent of abolishing the Senate. He argued that it does not represent the interests of the American people, calling for a grassroots movement to combine the two chambers into one.

Dingell was born in Colorado Springs on July 8, 1926. His political life began early: His father, John Dingell, was elected in 1932 to represent what was then Michigan’s 15th Congressional District.

After growing up in the Great Depression on peanut butter and mayonnaise sandwiches, the younger Dingell spent his teen years as a page in the U.S. House, from 1938 to 1943. He joined the U.S. Army in 1944, serving until 1946. With the end of the war, Dingell went on to earn his undergraduate and law degrees at Georgetown University. He married his first wife, Helen Henebry, with whom he had four children.

He was working as an assistant prosecuting attorney in Wayne County, Michigan, when his father died in 1955, prompting Dingell Jr. to enter and win the special election to fill his late father’s congressional seat. While the borders and numbering of the districts would shift over the decades, he would be re-elected to the House 29 times, usually by comfortable margins.

Dingell’s power base within Congress was the House Commerce Committee (now officially the House Energy and Commerce Committee), which oversees a broad range of issues and federal activities. He served on the panel for more than 57 years, including about 16 years as chairman. He was known for his demanding demeanor with witnesses, including government officials, and his penchant for sending harshly worded letters, or “Dingellgrams,” by the hundreds to agency leaders.

“I try to be humane on the issues, but there are times I have to be ruthless. I am not here to be a well-liked patsy,” Dingell told People magazine in 1986.

Dingell introduced a bill to provide universal health care each term he was in Congress. It was a measure first introduced by his father, a strong proponent of President Franklin Roosevelt’s New Deal. During his time in Congress, the younger Dingell’s persistence slowly brought reforms to the country’s health care programs.

“As I have revised the bill over the years, we found about half of the original legislation has been enacted into law,” he told NPR in 2009.

In 1965, Dingell presided over the House as it passed a bill to establish Medicare, a program his father had also initially proposed. He also helped enact children’s health insurance and vaccine initiatives.

Obama recognized the lawmaker’s contributions toward the Affordable Care Act in a statement on Dingell’s retirement.

“Of all John’s accomplishments, perhaps the most remarkable has been his tireless fight to guarantee quality, affordable health care for every American. ... And as an original author of the Affordable Care Act, he helped give millions of families the peace of mind of knowing they won’t lose everything if they get sick,” Obama said.

Dingell’s reach went well beyond health care, however. He was a strong proponent of the environment and heavily involved in crafting key legislation to combat pollution, save endangered species and require the government to consider the environmental consequences of development.

Asked in a Reddit Q&A last year why Republicans “don’t care” about global warming, Dingell replied with a heaping serving of snark: “Because they’re preparing for the hot place in hell that awaits many of them?”

The former congressman also helped create North America’s first international wildlife refuge along the Detroit River. A new visitors center at the refuge was named in his honor in January 2017.

Of the 28,551 votes he cast in Congress, Dingell called his support for the Civil Rights Act of 1964 his “single most important vote.”

“It did give the country a tremendous amount of hope that we could move to other things that were important,” he said, reflecting on the landmark law in 2012.

Dingell was an avid hunter who decorated his Capitol Hill office with the trophies of his kills. His strong advocacy of gun rights, however, earned him criticism from progressives along with high ratings from the National Rifle Association. He served on the NRA’s board of directors for years, but resigned in 1994 as he prepared to vote for an NRA-opposed crime bill that banned a number of assault weapons. (Dingell said he opposed the weapon ban but supported the bill.)

Progressive allies also criticized the Michigan congressman for his longtime support of the auto industry, which led him to oppose stricter vehicle fuel-efficiency standards. His second wife, Debbie, was a lobbyist for General Motors when they met. While she gave up that role when they married in 1981, she worked for GM for 30 years.

“I am elected to represent the people of Michigan and in our part of the country,” he once said. “My people live and die by the success of the auto industry and manufacturing.”

On June 7, 2013, Dingell became the longest-serving member of Congress in history. By the time he retired, he had served 59 years and 22 days, according to the Office of the Historian of the U.S. House.

He was apparently ready to be rid of Washington politics.

“I find serving in the House to be obnoxious,” Dingell told Detroit News editorial page editor Nolan Finley upon announcing his pending retirement in 2014. “It’s become very hard because of the acrimony and bitterness, both in Congress and in the streets. ... This is not the Congress I know and love.”

Debbie Dingell, who remained active in politics and the D.C. social scene during her husband’s congressional tenure, won the election to succeed him in November 2014.

In the midst of serious business, John Dingell had a lighthearted side, with room for a wink and a laugh when warranted. Every holiday season, his office put out a “Dingell Jingle” commenting on current congressional events in the meter of a poem or song ― a tradition his wife has carried on.

Dingell’s staffers helped keep his Twitter and Facebook accounts packed with photos and jokes about the events of the day and Michigan sports. (The Atlantic once named his Twitter feed the best in Congress.) After retiring, Dingell remained active on social media, attracting attention for his fiery live-tweeting of a GOP presidential debate in late 2015.

One of his better-known Twitter exchanges occurred in 2014, in response to a since-deleted tweet from the EPA Water account that mentioned celebrity Kim Kardashian and an iPhone game:

I'm the last original author of the Clean Water Act, but I have no idea who/what a Kardashian is and I rarely play games. You OK, @EPAwater?

He followed up later with the real zinger:

Staff has now informed me of what a Kardashian is.

I'm only left with more questions.

Yet Dingell pulled no punches when it came to President Donald Trump. The former congressman regularly spoke his mind using the president’s preferred social media platform ― particularly after a neo-Nazi demonstration in August 2017 left one counterprotester dead. In response, Trump said in part that “both sides” were to blame.

“I signed up to fight Nazis 73 years ago and I’ll do it again if I have to,” Dingell said in a tweet.

I signed up to fight Nazis 73 years ago and I'll do it again if I have to.

Hatred, bigotry, & fascism should have no place in this country.

In one comment on the December-January partial government shutdown, he cut right to the chase.

“Burn this entire administration down,” he wrote.

Dingell remained active on Twitter even after he had a heart attack in September, joking that “rumors” of his demise “may have only been slightly exaggerated.”

“I’m still here and you’re not done with me yet,” he added.

But his health continued to decline. Debbie Dingell explained that she skipped Trump’s second State of the Union address in D.C. to be home in Michigan with her husband, whom she said had “entered a new phase.”

“We thank people for their friendship and support and ask for prayers and privacy during this difficult time,” she said.

Carla Herreria contributed to this report.

This article has been updated with a statement from Rep. Debbie Dingell’s office. 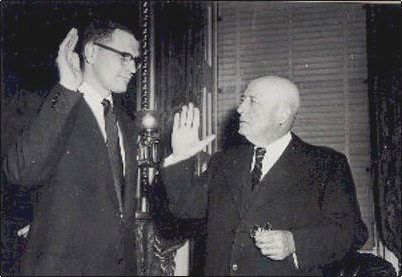