The husband of John Ensign's mistress spoke publicly for the first time today, claiming that the Nevada Senator continued to pursue his wife, Cynthia Hampton, even after powerful political colleagues tried to stop him.

Doug Hampton said that Oklahoma Senator Tom Coburn and others urged Ensign "to end the affair and help the Hamptons pay off their home and move to Colorado. But Ensign was so infatuated that he continued, Hampton said, reports the Las Vegas Sun.

He also claimed that Ensign paid Hampton's wife more than $25,000 in severance, which could be a possible felony violation of campaign finance law.

Hampton added that Coburn confronted Ensign and urged him to provide millions of dollars in assistance to the Hamptons to pay off their mortgage, in addition to getting Ensign to write a remorseful letter to Cynthia Hampton.

In the letter, Ensign expresses his shame: "I was completely self-centered and only thinking of myself. I used you for my own pleasure not letting thoughts of you, Dough, Brandon or Brittany come into my mind."

But that attitude changed quickly, says Hampton, who claims that Ensign later repudiated the letter and told him "I'm in love with your wife." 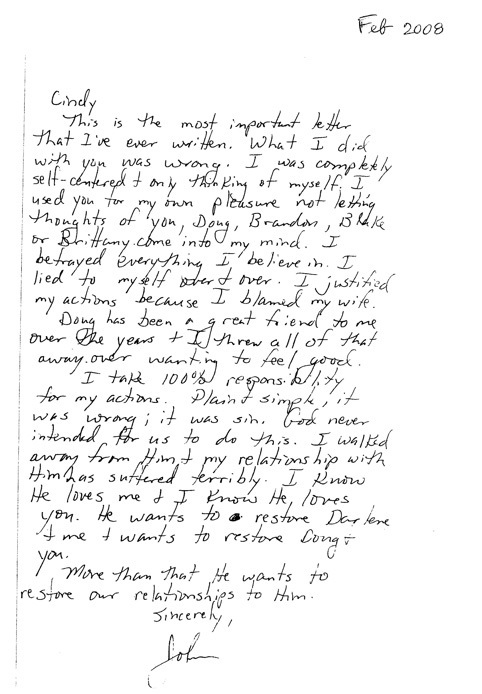