"Fine art is that in which the hand, the head, and the heart of man go together" - John Ruskin

On the opening day of "Three Fragments of a Lost Tale: Sculpture and Story by John Frame," on view through June 20th at the Huntington Museum and Gardens, I emerged from the darkly lit Boone Gallery into the bookstore to find a nicely dressed older woman looking at me expectantly. "Are YOU the artist?" she asked. 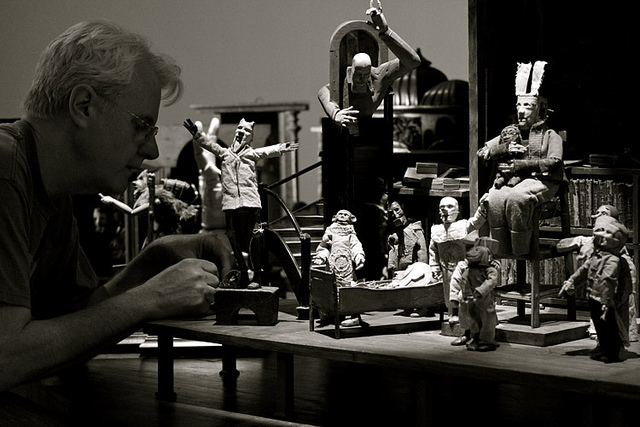 I told her I wasn't, and then pointed her towards Frame, who was outside, chatting with a few friends. If I hadn't already been introduced to Frame I probably would have also been scanning the crowd wondering "where is the artist?" The most striking thing about John Frame is that he doesn't have any of the tics, eccentricities or affectations that often mark artistic personalities. He fit right into the crowd.

An amiable man with handsome, patrician features, Frame could have passed for a San Marino attorney previewing the show, or perhaps an Occidental professor there for the white wine. Relaxed in conversation, and more interested in others than he is in himself, Frame comes across as man who is utterly comfortable in his skin. That is where it gets interesting.

Frame's ability to negotiate the real world -- the outside world -- is the flip side of his mastery of his own inner universe. Inside the Huntington's Boone Gallery are 35 completed characters, multiple sets and a working theatrical stage that have been hewn from Frame's imagination over the past five years. Committed to the idea that intuition is to always be respected, the artist's images are things that he guides into being without asking just what they are. The results are challengingly mysterious, and the approach leaves Frame utterly at peace with himself.

"I have to follow the lead of the work," he says.

"I think of Frame as a sort of mystic," says his friend, painter Jon Swihart. Frame's exhibition, says Swihart, is "...so ethereal, haunting and captivating, that while viewing it, I had the sense that nothing of the outside world mattered."

John Frame has been making sculpture in Southern California since the early 1980s, and has been taking his time in letting his ideas and methods evolve. "I'm 60," he comments, "and considering the alternative, not bothered by it."

Frame left Los Angeles in 2001 and re-settled in Wrightwood where he found a certain distance and quiet he had been craving. "I have a very removed life by today's standards," he says. In Wrightwood Frame busied himself with a number of commissions that needed finishing. He was also very involved in preparing for a retrospective being planned by the Long Beach Museum of Art; "Enigma Variations: The Sculpture of John Frame, 1980 to 2005."

The Long Beach show was a big moment for Frame, and also a kind of hinge. When it was over some Frame found himself artistically stuck until he sat up in bed one night at 2 AM, jolted awake by the idea of having his figures move. "It came as a single download," Frame told the LA Times. "It was all the characters, it was dialogue, it was sets, it was plot, it was story line -- everything, it was all there."

Dr. Jessica Todd Smith, the Huntington's Chief Curator of American Art, had seen the Long Beach show in 2005 and felt a connection to the work. Frame, in turn has long been fascinated by the Huntington's rare holdings of works by the English poet and visionary William Blake (1757-1827). When Frame made an exhibition proposal to Smith and her colleague John Murdoch in 2008 -- which included not only sculpted figures, but stop-motion film in which they came to life -- everything clicked.

"It made perfect sense," says Smith. To celebrate Frame's affection for William Blake, Smith also arranged for a show that runs concurrently: "Born to Endless Night: Paintings, Drawings, and Prints by William Blake Selected by John Frame." Presented in the Works on Paper Room of the Huntington Art Gallery, "Endless Night" -- for which Frame wrote the exhibition labels -- provides fresh insights about Blake, and also about just what Frame admires in his works.

"Through imagination," writes Frame about Blake, " he believed you accessed the Divine; in the act of creation you realized your purpose as a human being." Commenting on one Blake painting, "Hecate or the Night of Enitharmon's Joy", Frame notes: "...the symbolism remains completely mysterious to me, and is richer because of that mystery."

That quote says something about Blake, but it may say even more about Frame. He hangs on to mystery, and the richness it evokes, as best he can. "He has a deep reluctance to be too literal," says Jessica Smith.

In order to develop a checklist for "Three Fragments," Frame had to be prodded into naming some of his characters. "We curators are bean counters," Smith says self-deprecatingly. Still, out of respect for Frame's artistic process the figures on display at the Huntington have no individual labels. That seems fitting, since the exhibition represents a way station on an artistic journey of indeterminate length and destination.

The cast of his films is enchantingly odd. Many of the figures have features resembling those of wooden marionettes or dilapidated toys. Some are recognizably human, some are animal/human hybrids. When I asked Frame about his aesthetic influences, I was interested to find that many of them were literary:

"The most important things that have affected me long-term, aside from the writings of Shakespeare, are the works of other great authors like Dostoevsky, Tolstoy, and Emily Dickinson. The filmmakers Bergman, Kurosawa, Tarkovsky, and Fellini radically transformed my world when I was younger. It has probably been classical music, however, that most consistently fed me over the last 20 years or so."

I also asked Frame if there was anything in his upbringing that might have played a role in cultivating such an expansive imaginative range:

"Grew up in a fairly backward Southern California household. My Texas-born father had only a third grade education and worked for the Santa Fe Railroad as a sheet metal guy. Not too much sticks out that would be very interesting. Went to work on the local dairy farm at 15 and have been working ever since. Moved 38 times between leaving my childhood home and the house we now live in."

One of Frame's motivations seems to be reclaiming the authenticity of the individual imagination. Among other things, it is a personal spiritual quest -- this is something he has in common with William Blake -- and he has an attraction to spiritual images that are untainted by religious orthodoxies.

For that reason, there is more than a hint of the occult in some of the rites, rituals and passages that have begun to appear in his films. One woman who visited the Huntington show later told Frame that she detected "...themes of seeking and seeing, burden, loss, damage, madness, wholeness, enlightenment, inhumanity, cycles, rebirth, controlled and controller - just to name a few."

Working in his 500 square foot Wrightwood studio, Frame carves, assembles, animates and even writes the scores for his developing films. John's wife Laura has contributed a great deal of sewing, and moral support for her husband's project. "My family is the best thing about my life," says Frame.

His youngest daughter Lily is a classical harpist who helps out with sewing and embroidery. Her husband, Johnny Coffeen edits Frame's films and created a short documentary about Frame's project which can be viewed at the Huntington. Ashley, his middle daughter, is a teacher and photographer who shot some of the images in the Huntington catalog and is credited "Ashley Fennell". Katherine, Frame's oldest daughter, is a speech pathologist and freelance editor. She reviewed and made changes to all of the text relating to the project including the catalog and the text panels currently on view with the Blake exhibition.

Devoting himself to film has created a few new, unique problems. One of the practical ones is that Frame, who has in the past supported himself by selling sculpture, has created a body of work that can't be sold. Fortunately, some of the photos he has taken of his cast are themselves works of art -- a selection of them are on view at the Huntington -- and the proceeds from the sale of photo editions will hopefully keep the lights on in Frame's studio.

When I asked Frame about any possible Hollywood connections, he was very reticent: Frame won't be the next Tim Burton anytime soon. Frame's primary responsibility is to his intuition, and to the world of images that it continues to conjure up. Whatever happens next, commercially, professionally and artistically, Frame will have to follow the lead of intuition, his muse.

"Like all truly great artists," comments Jon Swihart, " John has become so creatively empowered by inspiration that his work transcends what mere human intellect is capable of."

"My sense is that we are somewhere in mid-stream," Frame says of his ongoing project. "From the very beginning, it has been a gift." 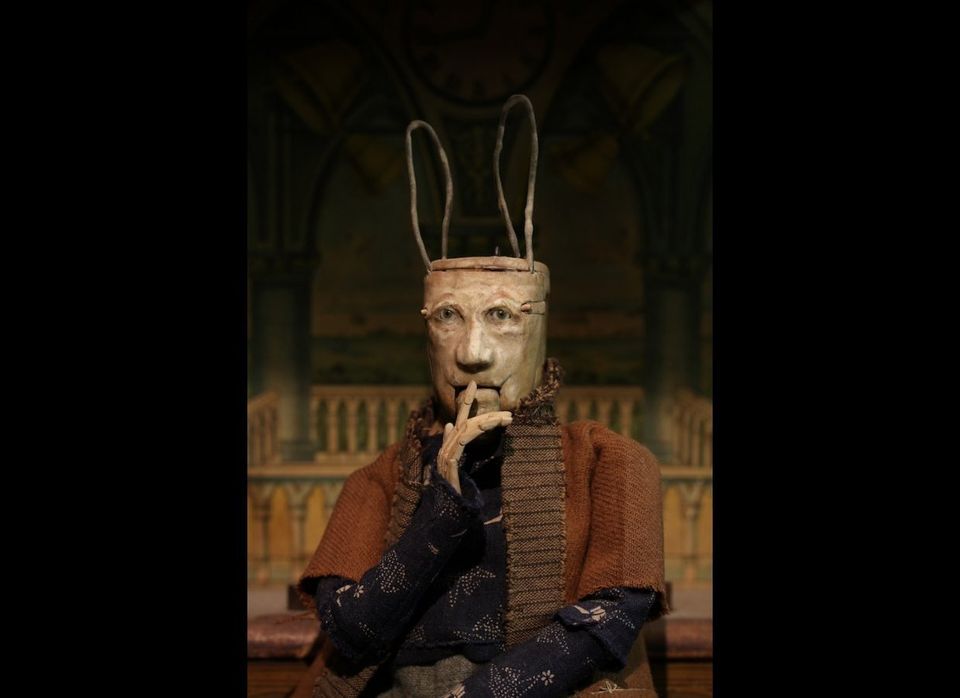