John Glenn, an astronaut, senator and old-fashioned American hero, died Thursday at the age of 95.

Glenn was the last survivor of the Mercury 7, selected in 1959 as NASA’s first group of astronauts. He became the first American to orbit the Earth on Feb. 20, 1962. It was a solo flight, not everything went as planned in space, and Glenn personified cool under pressure.

Those nerves had earlier served him well as a much-decorated veteran of two wars and a military test pilot ― and perhaps they came in handy later in his 24 years in the U.S. Senate representing his native state of Ohio.

He was born July 18, 1921, in Cambridge, Ohio, to Clara and John Herschel Glenn Sr. The family moved to nearby New Concord when he was two, where his father opened a plumbing business. Glenn later wrote, “A boy could not have had a more idyllic early childhood than I did.”

He attended Muskingum College to study engineering, but dropped out to enlist in the Navy’s aviation program after the Japanese bombed Pearl Harbor in 1941. “I knew my responsibility,” he later said, “and I thought it was important to get going.”

In World War II, Glenn flew 59 combat missions in the South Pacific as a Marine aviator. He flew a further 90 combat missions during the Korean War. For his valor, he earned numerous awards and decorations, including the Distinguished Flying Cross six times.

His aircraft was hit by enemy fire on five different occasions, yet he escaped serious injury. A 1962 Life magazine spread noted that Glenn once returned from a mission in Korea with 375 holes in his plane. Crew members nicknamed the aircraft “the flying doily.”

Before missions, he shared an inside joke with his wife Annie, assuring her that he was just going to the corner store to get a pack of gum, to which she would reply, "Don't be long." Years later, just before his solo spaceflight, he gave her a present, a pack of gum, which she carried in a pocket next to her heart until he returned safely.

The Glenns were childhood sweethearts who had married in 1943. He would later remark that her decades-long struggle with -- and ultimate triumph over -- a severe stutter out-shined his own accomplishments.

"I saw Annie's perseverance and strength through the years and it just made me admire her and love her even more," he wrote. "I don't know if I would have had the courage."

After the Korean War, Glenn joined the Naval Air Test Center, where he worked as a test pilot. In 1957, he piloted an F8UI Crusader from Los Angeles to New York in just under three and a half hours. That transcontinental flight, dubbed "Project Bullet," was the first to average supersonic speed.

His most famous accomplishment, however, came when he was launched into space in February 1962 in a tiny Mercury capsule atop an Atlas rocket.

In the span of four hours and 55 minutes, Glenn orbited the Earth three times aboard the Friendship 7 spacecraft, at a maximum altitude of around 162 miles and an orbital velocity of nearly 17,500 miles per hour.

Though his heart rate monitor showed a pulse of between 60 and 80 beats per minute while awaiting liftoff -- "closer to bored than apprehensive," wrote Columbus Monthly in 1998 -- Glenn was well aware of the mission's dangers. Several of the prior unmanned test launches had ended catastrophically, and his own mission had been called off 10 times in the previous four months.

He later joked, "I felt exactly how you would feel if you were getting ready to launch and knew you were sitting on top of 2 million parts -- all built by the lowest bidder on a government contract."

The flight wasn't without its terrifying moments. At the end of his first orbit, a jet clogged and pitched the capsule 20 degrees to the right. Glenn had to abandon the automatic control system in favor of manual "fly by wire" controls for much of the remaining mission.

During his second orbit, a warning indicated that the spacecraft's heat shield -- critical to keep it from burning up on re-entry into Earth's atmosphere -- might have come loose.

NASA instructed Glenn not to jettison a set of retro-rockets after firing them to slow his re-entry, hoping they would help hold the heat shield in place.

“There were flaming chunks of the retro-pack burning off and coming back by the window,” Glenn recalled. “I didn’t know for sure whether it was the retro-pack or the heat shield, but there wasn’t anything I could do about it either way, except just keep trying to work and keep the spacecraft on its actual best attitude coming back in.”

Rest in peace John Glenn. You reached for the stars. Thanks for bringing us along. #JohnGlenn (🎨: @geesubay)

The shield held and he splashed down 800 miles southeast of Florida, where the USS Noa picked him up 21 minutes later.

Celebrity greeted him on his return to Earth. Not only had Glenn’s flight advanced science; it boosted the spirits of Cold War America. The Soviets had beaten the U.S. into space in both manned and unmanned spacecraft, and Glenn’s flight marked an American comeback.

“We hadn’t really thought that any nation could even touch us technically,” Glenn told ABC News in 1998, recalling the attitude at the time. “And all at once, here was this bunch of Soviets over there, for heaven’s sake, outdoing the United States of America in technical and scientific things.”

Then he returned to NASA and awaited another mission ― one that wouldn’t come for several more decades. Unbeknownst to the astronaut, Kennedy viewed him as such a political asset and national symbol that he had prohibited NASA from sending Glenn back into space, worried he might lose his life.

In 1964, Glenn left NASA to run for the U.S. Senate. Within weeks, a fall on his head left him hospitalized for nine months, scrapping his campaign plans.

But he didn't give up on political life. He had developed a personal friendship with the Kennedy family. In 1968, when a gunman left Bobby Kennedy mortally wounded, his wife, Ethel, turned to the Glenns to take the Kennedy children away and look after them. And it was John Glenn who had to tell those children that their father had died. It was, he said, "the hardest thing I've ever had to do in my life."

Glenn ran for Senate again in 1970, losing in the Democratic primary to Howard Metzenbaum, and then tried once more in 1974. His third bid was successful. He would serve four terms in the Senate until his retirement in 1999.

As a senator, Glenn helped author the 1978 Nuclear Non-Proliferation Act and served on the Foreign Relations Committee, the Armed Services Committee and the Special Committee on Aging. He chaired the Governmental Affairs Committee from 1987 to 1995, where he pushed to increase government accountability. He also made an unsuccessful run for the White House in the 1984 election cycle.

In 1989, Glenn found himself embroiled in a growing scandal along with four other senators who had received donations from a wealthy banker named Charles Keating Jr. Keating had defrauded investors in his Lincoln Savings and Loan Association of more than $250 million. U.S. taxpayers ended up on the hook for $3.4 billion to cover the S&L’s losses, reports The Economist. But as regulators closed in on him, Keating called upon the senators he’d donated to ― later dubbed the “Keating Five” ― for help stalling the investigation.

A 1991 inquiry by the Senate Ethics Committee cleared Glenn of impropriety, though it concluded he had exercised “poor judgment.” Ohio voters, apparently undeterred by the scandal, re-elected him to the Senate in 1992 for his fourth term.

Throughout the years, Glenn longed to return to space.

The opportunity finally came on Oct. 29, 1998, nearly four decades after his first launch, when Glenn strapped in aboard the space shuttle Discovery. At age 77, he was the oldest person to fly in space. Over the course of the shuttle’s nine-day mission, Glenn helped scientists peek into the aging process and the effects of spaceflight on the human body.

Unlike his solitary first mission, this time around Glenn was joined by an entire crew of other astronauts. His descent back to Earth was likely more enjoyable as well. Aboard the shuttle, the elder astronaut had to withstand a G-force of 3 on re-entry, compared to the 6 Gs he experienced on Friendship 7.

In retirement, Glenn remained a vocal supporter of space exploration in general and NASA in particular. On the 50th anniversary of his historic flight, he reflected in a 2012 interview with The Associated Press that he’d been “very fortunate to have a lot of great experiences in my life.”

His one major regret, he said, was not having personally made it to the Moon. That accomplishment went to another man from Ohio, Neil Armstrong.

Armstrong responded by calling Glenn’s original flight “the most significant of all the space anniversaries.”

“John Glenn deserves all the honors that his country can bestow,” Armstrong added. “He is an American patriot.”

“As we bow our heads and share our grief with his beloved wife, Annie, we must also turn to the skies, to salute his remarkable journeys and his long years of service to our state and nation.”

“John always had the right stuff, inspiring generations of scientists, engineers and astronauts who will take us to Mars and beyond ― not just to visit, but to stay,” The White House said in a statement. “The last of America’s first astronauts has left us, but propelled by their example we know that our future here on Earth compels us to keep reaching for the heavens.”

CORRECTION: This article previously misstated when Glenn began his chairmanship of the Senate Governmental Affairs Committee as 1978; the correct year is 1987.

John Glenn Dead At 95: He Served His Country In War And In Space
John Glenn 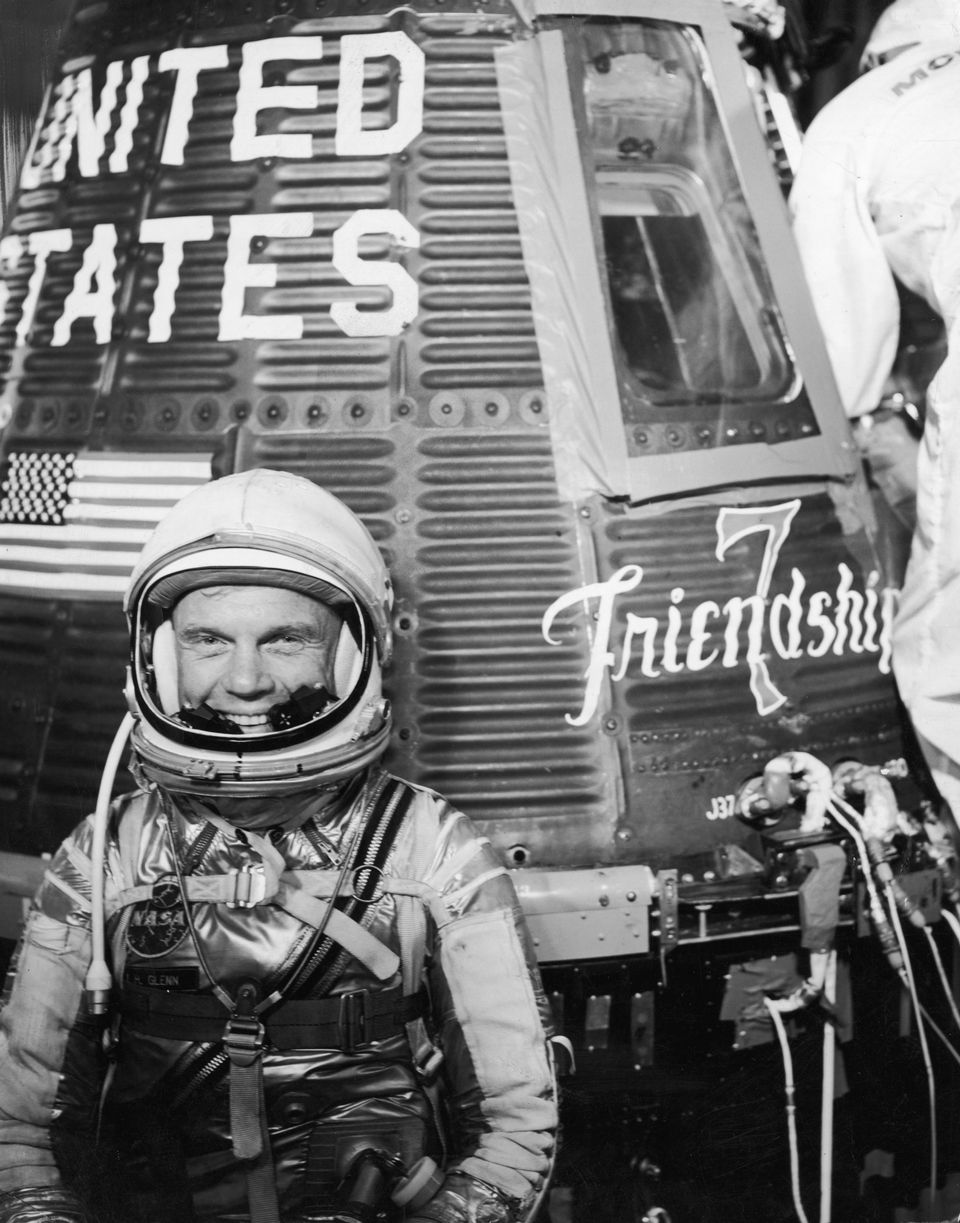