Genius at Play: the Curious Mind of John Horton Conway (Bloomsbury) by Canadian writer Siobhan Roberts is the new 450-page biography of a remarkable and undeniably eccentric English mathematician who's long been a main attraction at Princeton University.

John H. Conway in Princeton, holding an advance copy of the first full account of his life to be written (March 2015)

For once, such hyperbole is justified, as Conway has carved out for himself a unique playground niche is the esoteric world of higher level (and often higher dimensional) mathematics. He has done so for over fifty years, with considerable charm and single-mindedness. He exhibits a potent mix of self-deprecating ego and disarming honesty, as well as an astonishing flair for discovery, creative collaboration, innovative reworking, catchy nomenclature and irrepressibly exuberant teaching.

Conway has led a charmed life of uncovering and clarifying new ideas and structures of worth, and is most well known in mathematical circles for his role in taming a monster and putting sporadic simple groups on the map (and in an associated atlas). He's particularly proud of his surreal contribution. Just a few years ago, he strayed from his usual stomping ground of abstract mathematics as games to hold forth on the subject of free will. The Simons Foundation recently hosted a series of revealing video clips of him discussing some of his work. 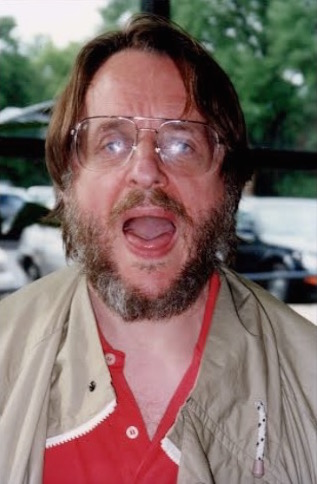 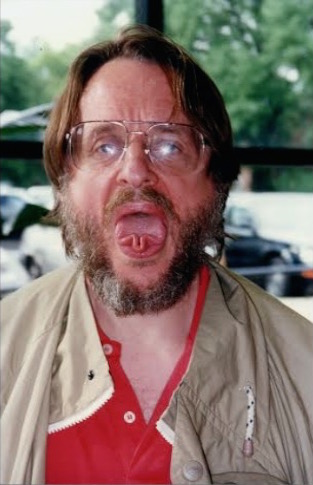 This Roberts biography does an excellent job of capturing the zany flavor of Conway's idiosyncratic and very productive life, replete with endless tall tales and intellectual hijinks most of which are probably close to true. (Did he really have a fling with Germaine Greer at Cambridge? He's not saying, and neither is she.)

Conway's considerable organizational talents are restricted to concepts and ideas, never extending to his personal life, so there are no diaries and old letters to consult at his end. Roberts has relied on her subject's colorful memories--he was cooperative on almost all (i.e., all but a finite number of) topics. She also did extensive fact checking with--and includes quote from--dozens of key associates from down through the years, both in his native England, where he lived until 1986, and in North America. The final picture comes across as fair and largely accurate. She doesn't shy away from some of Conway's social shortcomings, not to mention the messes his love life has got him into over and over, but she doesn't dwell unduly on them either.

Conway is one of a handful of 20th century personalities, such as Paul Erdős (1913-1996) and Martin Gardner (1914-2010), whose mathematical work has inspired legions of devoted followers far removed from the usual associations of the genre. These totally different kinds of men have all been the subjects of articles in major newspapers, as well as documentaries and conferences. (Conway is one of three living mathematicians--all longtime friends and collaborators--being honored this August at the MOVES conference at the Museum of Mathematics in NYC.)

Conway knew both itinerant genius Erdős and communicator extraordinaire Gardner, and was influenced by both, especially the latter, with whom he had an extensive and fertile relationship. Like Erdős and Gardner, he's also gone out on a limb from time to time by offering cash prizes from his own pocket for solutions to particularly thorny problems which really bothered him. As in the case many of those Erdős and Gardner puzzlers, Conway's challenges have often remained unanswered to this day, though one, we read here, cost him $10,000 (later reduced to $1000) due to carelessness on his own part.

Until quite recently, Conway depended on "minders" (often wives and secretaries) who made sure he set off where and when he was supposed to, for instance when leaving town to give presentations, as such mundane considerations were beneath him. He got away with this for decades because he's a consummate showman worth the trouble he causes: once "on stage" he puts on a hell of a show that people talk about for years to come.

But there was another side to these stories. He might be put on a plane or train successfully from his home base, but what happened at the far end? Did he know what to do once he arrived at his destination? Of course not, he had to be pampered at both ends. Anyone who ever invited with him anywhere soon learned about this "Conway uncertainty principle"--and when he visited Spelman College in Atlanta, for Math Awareness Week in 1995, we experienced this first hand.

He emailed ten hours before his early morning flight to say he was most dreadfully embarrassed but the plane ticket for Atlanta that had been on his desk all day had mysteriously vanished. An indulgent Provost at Spelman had to authorize a new ticket (issued at great expense) the following morning, to be put into his hands by airline personnel at Newark Airport. Conway offered to waive his speaking fee if the old ticket didn't show up--in those days getting on a plane was completely tied to having a paper ticket--and as soon as he left Princeton for the airport, his assistant scoured his desk at my request. She found $2000 worth of uncashed checks, but no plane ticket. It hasn't been seen since. 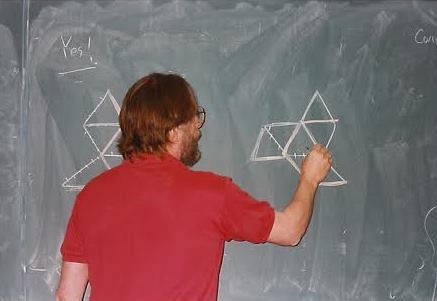 Lecturing at Spelman College on his own answer to the question Can You Hear the Shape of a Drum? (April 1995)

With nerves fraught I picked him up at Atlanta's airport, and even before I got him safely to Spelman's campus all was forgiven. He immediately had me spellbound with a story about his new "290 theorem" which he was in the middle of proving--it later featured in a provocatively title book of his. He also caught me off guard with an extremely personal revelation, which in hindsight confirmed that--again like Erdős and Gardner (I'd already met the former and would later get to know the latter)--his approach to life and personal interaction was uninformed by usual social niceties, credentials or status. In Conway's case, if he took a shine to somebody, he might reveal his passions and innermost thoughts within minutes of meeting, with no inhibitions whatsoever. 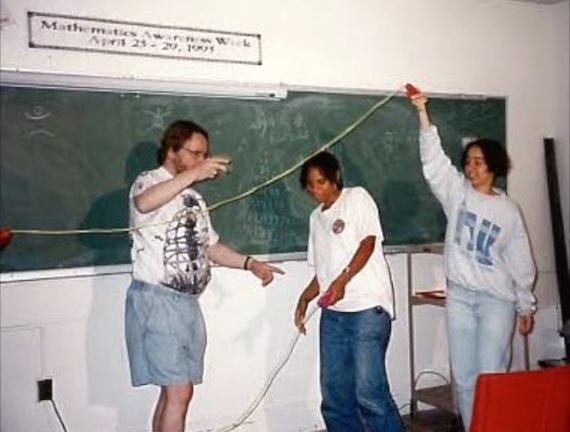 Tangling students in the math of skipping rope, during Mathematics Awareness Week at Spelman College (April 1995)

Conway's three presentations at Spelman College that spring week covered a lot of ground--he started one of them in trademark form by sketching seven possible talks quickly and having students decide on the spot which one they wanted to hear--and his magnetic personality and unbridled enthusiasm infected all who came within his reach. Whether speaking of knots, symmetry, numbers or linguistic curiosities, he was the living embodiment of Gardner's credo that approaching mathematics in a spirit of play is the real secret to getting students' attention.

Since Conway believes that we are all students--or at least have the potential to be--he's never seen play and games as something only suitable for youngsters. The nimbleness of his mischievous mind was still on full display when I last met him three months ago, despite advancing years and spotty health. There is no question that there have been times he's felt underappreciated in the great scheme of things, or that too many people only think of him in connection with the Game of Life from 1970. While he pretends otherwise, he's obviously thrilled that Siobhan Robert's broad scope biography is finally hitting the streets.

Genius at Play: the Curious Mind of John Horton Conway was a full eight years in the making, and it's a fascinating read from start to finish. I learned so much, especially about the chronology of Conway's creation-stuffed life, while gaining new appreciation for the depth of the myriad contributions he has made to mathematics and its dissemination. The book never gets bogged down in mathematical detail, yet it conveys much of the unstoppable excitement of its hero in full throttle. Roberts has already won kudos for her book on geometer Donald Coxeter, and this volume serves to cement her position as a top mathematical biographer.

All photos by Colm Mulcahy, with color adjustments by Rob Cook.


Colm Mulcahy is Professor of Mathematics at Spelman College in Atlanta, Georgia. He tweets at @CardColm.