John Kasich met with some Orthodox Jews in New York and tried to teach them about Judaism.

He rudely and contemptuously insisted that the story of the Jews is more about God's covenant with Abraham than it is about God's relationship with Moses or Moses with the Jews.

Kasich had to be reminded that Jews talk about the Laws of Moses. And even non-Jews use the terms Mosaic Code, Mosaic Law.

But he dismissed all that. 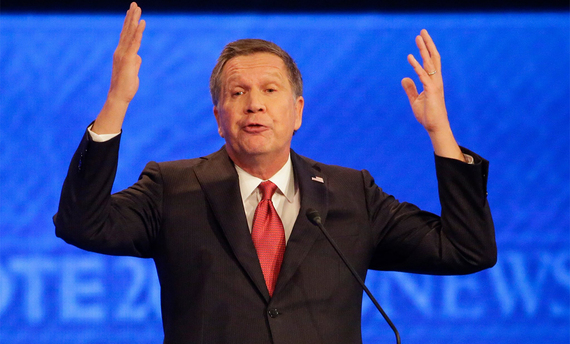 So where does Kasich think the Ten Commandments came from? Did Abraham do a first draft and leave them for Moses to find years later on Mt. Sinai?

Watching him lecture Jews about their own holy books isn't just embarrassing, it's infuriating. Kasich dismisses what they say because he knows Judaism better than they do.

Kasich even tried to explain the story of Joseph and his brothers to Talmud students. Like suddenly he's an expert? Please.

That's called "goysplaining" by some, but I'd call it contempt, prejudice, stupidity--or all three.

People say Cruz is nasty and Trump is a buffoon; well, Kasich has just joined the club. He's no better than either of them. There's no real alternative there, just different packaging.

Lev Raphael is the author of 25 books in genres from memoir to mystery, available on Amazon.