Ohio Gov. John Kasich on Sunday compared the growing federal debt to the so-called great fire of Rome, appearing to lament what he perceives as a lack of action by policymakers to reduce government spending.

The U.S. government’s total debt in December surpassed $18 trillion, according to the Department of the Treasury. Kasich, a Republican and potential 2016 presidential contender, said his fellow party members shared the blame.

“We’re fiddling around while Rome burns,” Kasich said on "Fox News Sunday," referring to the blaze in A.D. 64 that spawned the popular legend that Roman leader Nero played a fiddle while most of the city was destroyed.

Kasich led the House Budget Committee during the latter years of former President Bill Clinton's administration, when Democrats and Republicans, buoyed by the technology revolution of the 1990s, were able to find agreement on spending issues to produce budget surpluses that in late 2000 led the Clinton administration to project a $5 trillion cumulative budget surplus during the 10 fiscal years beginning in October 2001. 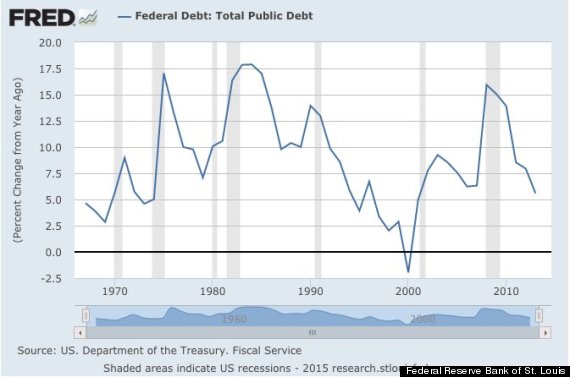 “They blew a $5 trillion surplus,” Kasich said of Republicans in Washington during the Bush administration. The projected annual surpluses, he said, were “quickly spent, unfortunately by Republicans.”

Two recessions, wars in Iraq and Afghanistan, and Bush-era tax cuts are largely to blame. The annual growth of the federal debt largely declined during Clinton’s years in office, increased during Bush’s term, and has been steadily falling during Obama’s White House years.

Kasich recently helped form a nonprofit group to advance his national campaign to enact an amendment to the Constitution that would annually require a balanced federal budget. Twenty-four states have passed resolutions calling for the amendment, according to his group, Balanced Budget Forever.

The group needs 38 states to approve such an amendment before it is added to the Constitution.

In response to concerns that federal deficits are needed to sustain the U.S. economy during recessions, Kasich said Sunday that the amendment could have exceptions for times of “economic calamity” or war.

Kasich also dismissed concerns that such an amendment would inevitably lead to a reduction of Social Security benefits.

John Kasich Compares Federal Debt To A Burning Rome, Says Republicans Share Blame
Iraq War: What Else Could America Have Spent $800 Billion On?