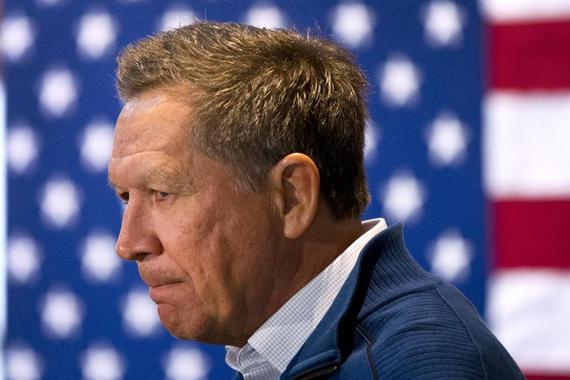 The writing's on the wall in the Republican Party: John Kasich will be the Party's nominee in 2016, with Marco Rubio as his running mate. Only the media's delight at continued Trumpian drama is keeping politicos and pundits from coast to coast from stating the obvious.

So as not to belabor the point, here are eight single-sentence reasons Kasich/Rubio is now almost certain to be the Republican ticket in 2016:

If all of the above occurs, as the conventional wisdom seems to now suggest it will, and the Democrats nominate Hillary Clinton, she'll begin the general election campaign down by double-digits to a man she hasn't polled well against for eight months or more -- basically since the beginning of the 2016 race.

The Republican Party is more than smart enough to see that Cruz's horrifying unfavorables -- somehow, incredibly, worse than Clinton's historically bad ones -- will sink his candidacy, especially when coupled with terrible head-to-head polling against Clinton or (per usual, much more dramatically) Sanders.

Meanwhile, Kasich's continued domination of Clinton in polling will convince Convention delegates -- who value electability above all else -- to put Kasich at the top of the ticket, and a known, reliable quantity like Rubio beside him.

Of course Bernie Sanders defeats Kasich by double-digits in the most recent polling, but Kasich and Rubio are both banking on the assumption that Democrats will, against all reason and hard evidence, nominate their least electable candidate.

And if they're wrong -- if Bernie's the nominee come Cleveland -- well, Bernie beats all the Republican candidates head-to-head, so at least (the Kasich argument will run) the Ohio Governor loses to Sanders by less than all the others.