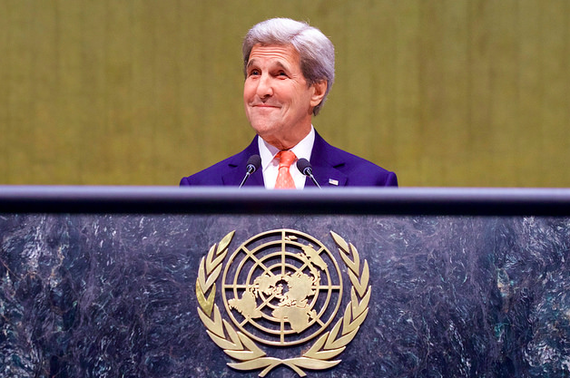 US Secretary of State John Kerry, giving remarks at the United Nations International School's commencement ceremony on June 2, 2106, held at the UN. His niece, Iris Kerry-Kaler, was among the graduating students. US STATE DEPARTMENT

He also had something to say about one of the graduating students, Iris Kerry-Kaler, his niece. Iris is the daughter of Peggy Kerry, who is based at the United States mission to the UN as its liaison officer to nongovernment organizations, and her husband, George Kaler, a financial and administrative adviser to nonprofit groups and institutions.

"If some of you were hoping for Beyoncé, I'm sorry, here I am," John Kerry said, explaining why he left all the crises of the world behind for the day. "I want you to know that not only is Iris a proud member of your graduating class, but she is also a terrific campaigner. And she got out the vote for Uncle John when I ran for president in 2004. I should have sent her to Ohio; it might have made the difference." A controversial vote count in Ohio cost Kerry the election.

"She had more common sense even then as a 6-year-old than some more recent presidential candidates whom I could name," he said. "But I won't name him." Kerry's swerve into the bombastic politics of Donald Trump, the presumptive Republican Party's presidential candidate this year, drew applause from the international audience.

The 2016 graduating class at the United Nations International School include many children who are the sons and daughters of diplomats or others working in a range of international jobs. It is an unusual New York institution, even in a city as diverse as this one.

The secretary of state, who with Peggy and his other siblings grew up in a diplomatic family, said: "This is not an ordinary school, and you are certainly not an ordinary graduating class. You represent 41 countries. You speak 38 languages -- though, hopefully, not all at once. Many of your parents sit alongside each other in the UN Security Council or right here in the General Assembly." (The event was recorded by the UN.)

Kerry encouraged the students in the graduating class to make the most of their unique international education as they confront huge global challenges, devoting a large portion of his remarks to climate change. He also addressed the bleak prospects facing young people globally.

"Each year, about 120 million people across the globe reach the age of 16, and almost 90 percent of them are in poorer countries," he said. "Overall, the youth unemployment rate is at record levels on a global basis. And somehow, through innovation, through ingenuity, through force of will, through your efforts, we will have to generate a huge number of new jobs, even while technology makes many old ones obsolete. And that task obviously does not stand alone."

He emphasized that getting to know the world was imperative, saying not only that this was something the diverse group of graduates at the International School had already experienced, but also how life abroad had shaped him from an early age.

"When I was just 11, my father was assigned to Berlin, Germany, not too long after the war, World War II," he said. "And I want you to know that my experience living overseas taught me an enormous amount, but one principal lesson that I will share: If you are trying to understand someone else's country, and you want to really know what's going on, make sure you look at that country not through your own lens, but through the lens of the people who live there."