On any given day, you might find John Leguizamo emotionally handcuffed to his mood swing. But that's a good thing, especially if you're launching a new one-man show. (Fodder for the masses, people. Fodder for the masses!) Enter "Klass Klown." It's Leguizamo's new opus of self-reflection and savage humor. It hits Berkeley Rep in Northern California June 1-12 as part of the theater company's "Fireworks Festival." (David Sedaris, Dan Hoyle and Wes Nisker are also on hand in separate events.) Leguizamo says the work will illuminate some of the behind-the-scenes antics in his colorful career. (We'll bite.) Here, the spirited fortysomething, who's made a dent in films like To Wong Foo, Thanks For Everything Julie Newmar and Moulin Rouge opens up about his creative process, why outsourcing sucks and, oh, so much more ...

A: It's a maddening process. It's incredible how much time it takes up.

Q: Yes. There's quite a bit going on for you. So with 'Klass Klown,' I'm curious. What can we expect?

A: Funny, that's what my mother said. Can you imagine what the general public will feel? Well, frequently, my shows are about my childhood or my relationship with my dad. And "Sexaholix" was all about my sexual failures and the death of my grandfather. This one is about my career. It's like my biopic before I die.

Q: Your biopic--come to life on stage.

A: Yeah, you know, the career--the ups and downs, and all that stuff that goes on that nobody says; the stuff that only you and your manager really know about that the rest of world has no clue about.

Q: So, I have to ask: How is it orchestrating these one-man shows? It has to be a tremendous amount of work and energy?

A: It's a crazy amount of work, man. It's like the Sistine Chapel. I've been working on this for years. It's incredibly complicated. Every moment has to be poetry, man. Every line, every movement. And you want movement or gestures to replace words. It's a tough process. It has to be very real and very heightened and very deep and very funny. I mean, I am up for the challenge. It's not easy.

Q: I imagine you're flooded with a ton of ideas, then?

A: From the moment I get up to the moment I go to bed, I am on this roller coaster ride. I feel like I getting to the finish line every day and then the finish line gets moved the next morning when I get up. And I'm like, 'Oh no, I thought I was so close!' Even my subconscious; even my dreams are about how to get to the next level and how to solve this one problem--this one-man show is like a Rubik's Cube and if you move one thing, then the color's off.

Q: What are you loving most about it?

A" I think the solving of problems. And the inspiration; the inspiration comes when I am adlibbing on stage; when something comes through me and I had no idea, and it's funnier than I thought. I love those moments.

Q: We can expect to hear about a gaggle of challenges from your career, right?

A: I mean, to get to a process to where you can be as creative on stage and as free as I am on stage, on film, it's pretty daunting. It's such a corporate world out there. So many people are afraid. There are so many battles to get creativity onto the stage. There are a lot of egos you have to navigate through and a lot of politics. I mean, to get To Wong Foo ... to be that fluid and that free, I was a Jihad, you know what I mean? I had to find a lot of stuff to try to be as free and fluid. And Carlito's Way, I had Brian De Palma and he allowed me to do 30 takes of everything. And that was really when I discovered my ability on film because he let me go and totally discover myself. 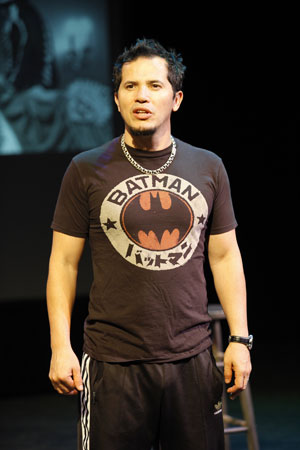 Q: You have a great bundle of energy. When did you know you were different; that you needed to express yourself?

A: I didn't know it consciously. I was acting out a lot. I was a class clown in school and almost got expelled. And then I got arrested for performing on the train. I knew what I wanted I just didn't know how to make it legal.

Q: Who are your biggest inspirations in life?

A: I have a lot of heroes, man. I don't think people give enough of a tribute [to their mentors]. They try to act like they're spontaneous generations--they are faking liars. For me ... Eric Bogasian. He brought the rock 'n' roll and sex to the one-man show. Spalding Gray brought the bio; like the diary aspect of it. And Whoopi Goldberg brought the poetry and the ghetto of it. Those are my biggest inspirations. But personally, I've had mentors. My math teacher told me to stop wasting class time and re-channel my energy and become a comedian. And, you know, some acting teachers along the way kept pushing me. I had my own ideas on where I wanted to go.

Q: Where do feel most natural, on stage, in front of the camera?

A: Acting comes the easiest to me. Writing is really difficult for me now. Sometimes I'm staring at my computer until beads of blood are running down my forehead--that's what it feels like. But it's the things that give you the most rewards that aren't always the easiest.

Q: What makes you laugh most?

A: At this point in my life, I have to say my kids really crack me up. The stuff that they say ... I mean, they are pretty witty and sarcastic and they understand all the subtleties of humor. They know how to be sarcastic and sardonic. You know, all kids are built to tell you what life is about. There is no buffer. My kids are telling me, "You know, Jim Carrey is funnier than you, dad. Why aren't you as funny as him?" And I'm like, "Really ... You say this to the guy that pays your rent? The guy that buys your food, your caterer, your cheauffer?"

Q: What really pisses you off?

A: Oh man, so much stuff! Outsourcing pisses me off the most. We have so many people in America. Do we really have to really talking to Prabha in India about my tech work? Come on! We can't hire somebody here to do that? I mean, stop it. They should put a block on outsourcing jobs; force them to stop or force them to pay a tax. I can't remember which president it was... but it was in the '50s, where he made the taxes on the wealthiest 95 percent and it was healthiest economy we ever had. So, the corporations are wrong!

Q: What are you most proud of?

A: I am very proud of a lot of stuff; anything I ever accomplished. I am like, "Man ... I can't believe I did that; that I was able to do that." I mean, coming form where I came from, to be where I am at, it's pretty incredible. It gives me a boost to have gone to Broadway; to have done off-Broadway and having had inspired so many people. That gives me the greatest joy. When writers, actors, young Latin kids ... when they tell me they've been to my stage shows and auditioned with my stuff and that they want to do what I want to do, that makes me feel great.

Q: What could the world use more of?

A: More Obamas. I can't get enough of Obama, man. I can't believe people say he hasn't done enough. Oh my God--anybody that would have inherited a destroyed economy would have been crushed by now. And he's doing health care and trying to raise taxes to save this country. He's doing everything he can, man. The fact that he's running this country gives me so much hope and optimism, more than I ever felt in my life.

Q: On stage, you're pretty uninhibited. What about off-stage? What are you inhibited about?

A: You know, I am kind of a bi-polarish schitzerphrenic. I run the gamut of being incredibly shy and withdrawn to being a crazy-eccentric exhibitionist. And I have always been like that. But I used to be crazier. When I didn't act as much I used to be a crazier dude in life, and now, I am a much calmer dude in life and much calmer in my work. I like it better that way.

Q: What's some of the best advice you've been given about life?

A: From my Mom. She said, "You're not born to be loved by everybody so stop trying to be loved by everyone." It was like ... I just have to please myself. That's kind of what I try to do with my work-- that crazy phrase form my mom always stuck in my mind. And yeah, I gotta do it for me. And it will be what I want it to be and there will be no regrets.

Q: So, what's the most interesting thing you've been learning about yourself, lately?

A: And cheap! These aren't New York prices! Huh. Well ... The show ... I learned that I have incredible tenacity and that's something I have been learning from the shows; that I have an incredibly creative well and that it's tough. I change [the show] every day. I give myself ridiculous goals, but I am achieving it. And it's like making my masterpiece. And I am going at it ... 300 percent!

Learn more about the man's work at leguizamo.ning.com or visit berkeleyrep.org.