Another day, another trivial Beatles artifact up for auction. We've had the tooth, the drummer letter and the cardboard sign. Now we add arguably the most revealing of items -- the to-do list, belonging to one John Lennon.

The list is up for auction on Gotta Have Rock and Roll, a site devoted to the sale of rock and roll memorabilia that previously sold Lennon's Talisman necklace for $528,000. The to-do list comes with a comparatively moderate price tag -- the minimum bid stands at $3,000, and it's estimated to go for $4,000 to $5,000 when the auction opens Wednesday.

So what did Lennon deem list-worthy? Number one on the list was letting the H.B.O. guy in between 3-5 -- this one has a star next to it so it must be important. Number two was getting his Thor Heyerdahl book back from Sam Green -- with an X next to it so it's safe to say Lennon and the book were reunited. It's also safe to say that Lennon was a diligent list-maker, considering he changed pens to write the X in a satisfying, bright red. He lists more books, presumably to buy, putting back Sean's mattress, marmalade, making sure both cars have full tanks of gas, and other wonderfully mundane items. 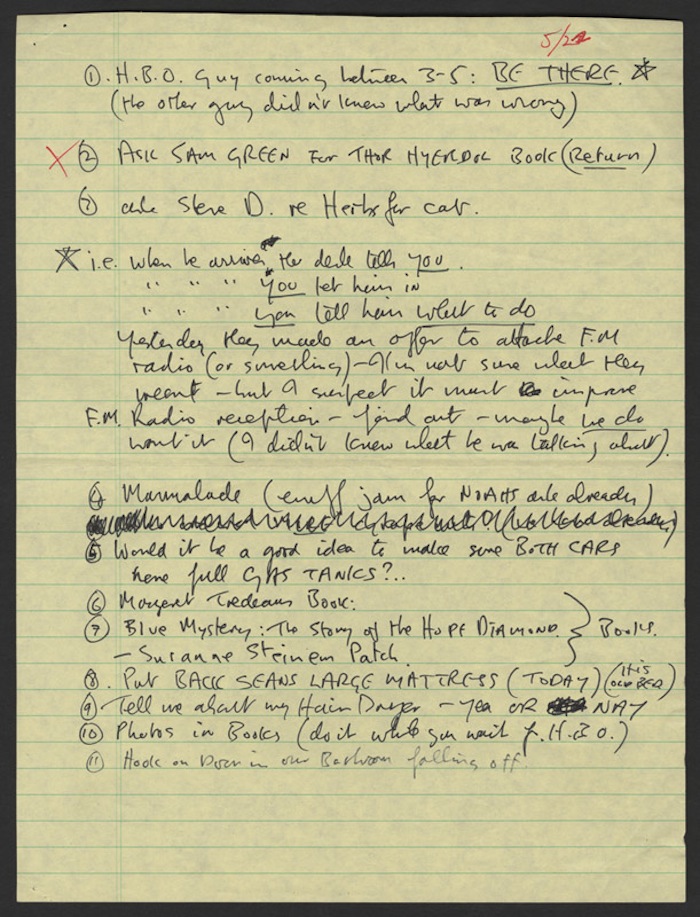 Check out our slideshow of The Beatles' recent pop culture domination:

John Lennon To-Do List Up For Auction (PHOTO)
1 / 7
Paul McCartney: Ocean's Kingdom
This September, the New York City Ballet collaborated with Sir Paul to put on "Ocean's Kingdom," a ballet part "Little Mermaid," part "Avatar" that McCartney wrote and scored himself. The ballet told the story of an underwater kingdom in conflict with the human world above. Vague choreography killed it for audiences and critics, <a href="https://www.huffpost.com/entry/paul-mccartney-oceans-kingdom-ballet_n_981037" target="_hplink">who reacted with polite dismissal</a>, but McCartney's onstage bow <a href="http://www.ft.com/cms/s/2/d2629776-e5ef-11e0-8e99-00144feabdc0.html#axzz1Z0LgOETN" target="_hplink">was a hit</a>.