"What do you want?" says the police officer. "F'eedom," replies the little girl, holding a sign that reads "Can A Man Love God and Hate His Brothers". 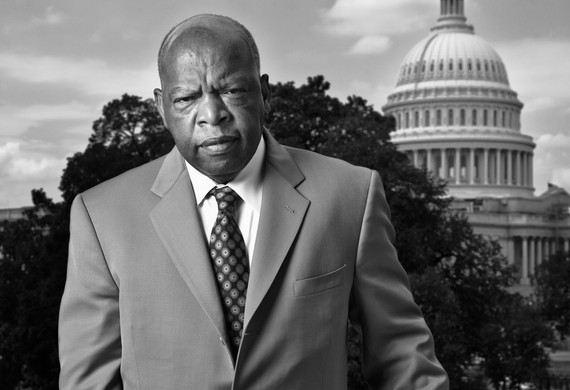 There are the heroes we always recognize in the comics: they have capes, masks, powers beyond belief. I have never been a fan of them. People flying around in long pajamas don't inspire me in the least. Recently, a comic came across my desk thought with a superhero I can believe in. He doesn't wear a cape, or fly faster than a speeding bullet. Nor does he need to; he raced the most pernicious supervillain of all: racism in America. 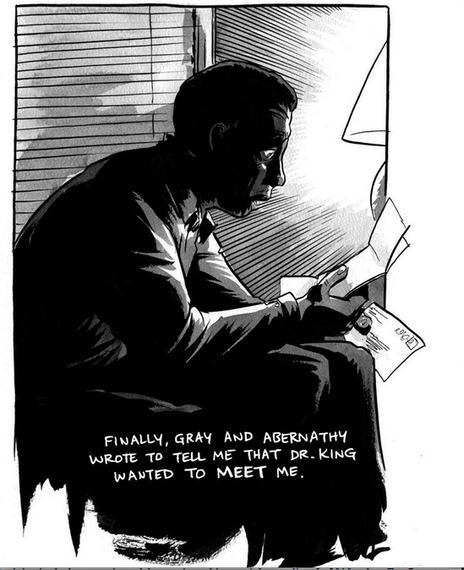 His civilian name is John Lewis, by day a mild-mannered congressman from Georgia, but in his role as a civil rights leader extraordinaire he is one of America's most courageous heroes. A half century after the most pivotal moments of the Civil Rights Movement -- the boycotts, the sit-ins, the marches -- Rep, Lewis, along with Andrew Aydin and Nate Powell, has just released the second of a planned trilogy of graphic novels titled March (Top Shelf Productions); an epic, stirring, and heart-wrenching series that retells the history of the Civil Rights Movement from one of its most prominent voices. 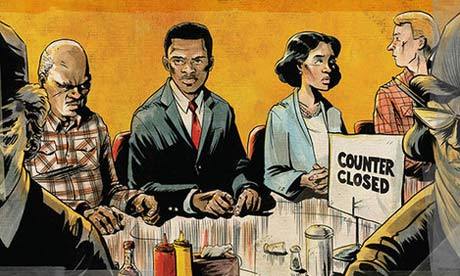 From the in media res opening scene from atop the Edmund Pettus Bridge, readers can see Lewis' life in an almost-linear progression, preaching to his family's chickens, leading the Student Nonviolence Coordinating Committee, speaking at the March on Washington, all the way to the present day, right before President Barack Obama's inauguration. Lewis' prose and Powell's art are direct and unflinching, with Lewis' authorial voice speaking from vast experience. Readers can feel the oppression of Southern black folk and the horrible, inexplicable injustice of Jim Crow America. Entering the movement at a dangerous, pivotal time, we feel the trepidation, repudiation and determination of individuals like Lewis who sacrifice their time, indeed their lives, never knowing if their efforts will lead to tangible results.

Michael Cavna of the Washington Post has called March "a riveting and beautiful civil-rights story" and I would have to agree. Non-fiction historical works can do an excellent job at informing, but there is a significant degree of separation from the action. Film scenes can pass too quickly to appreciate, but in the comic form, the eye can linger on horrific scenes, absorbing every minute detail. For every violent attack, I felt horror. In the same instance, the courage of the nonviolent resisters who were abused struck me with awe.

Rep. Lewis serves as a continual reminder of how important it is to remember the sacrifice of those who worked for civil rights, and the price to pay if we do not vigilantly guard that liberty. In spite of all the injustice he has experienced, he continues his nonviolent policy. In 2010, when Tea Party activists harassed, hurled racial epithets, and even spat at one member of the Congressional Black Caucus as they entered Congress to vote for the Affordable Care Act, Rep. Lewis said: "...it's okay, I've faced this before." Nevertheless, Rep. Lewis can be very passionate when defending civil rights. In June 2013, when the Supreme Court struck down a major part of the Voting Rights Act (Shelby County v. Holder), on the grounds, dubious I'd say, that since violations had diminished over time, there was no longer a need for the law, Lewis reacted strongly: "Those justices were never beaten or jailed for trying to register to vote. They have no friends who gave their lives for the right to vote. I want to say to them, Come and walk in my shoes."

This is an important work, not just for comics, but for future generations of Americans. Although he has been arrested more than forty times, beaten and jailed on numerous occasions, Lewis proves that you can have a fulfilling and successful life when standing up for the fundamental principles of liberty and equality. It is my hope that these comics will inspire people to struggle, to achieve, to dream, of better tomorrows, always keeping an eye of the injustices we can fix today.