This photo was posted on August 8, 2008 on the web site of the Council of Conservative Citizens (C of CC). This kind of racism aimed at Barack Obama's candidacy for president should not be tolerated as we approach the most intense phase of the election cycle.

The C of CC site also features prominently Jerome Corsi's new attack book on Obama ("The Obama Nation"), along with an interview that Corsi recently gave on a racist radio station. This kind of white supremacy, interconnected with the Republican Party (especially its Southern wing), should require clear and repeated denunciations from John McCain (who recently told the NAACP that he is a great admirer of Martin Luther King, Jr.). 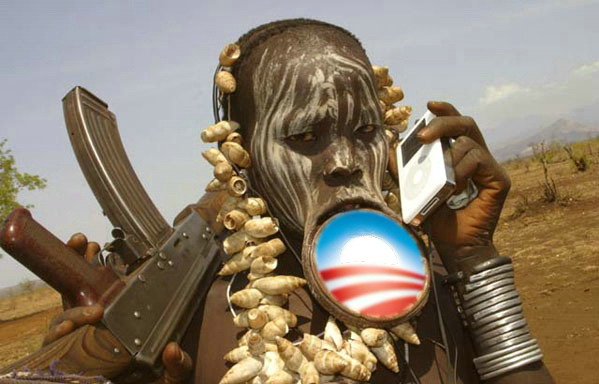 This is the Caption:

"Picture of the Week.
CofCC.org News Team
Africans view an Obama presidency as a windfall for Africa, believing that Obama will increase handouts.
Obama supporter in Africa."