[N.B. I inadvertently bollixed some of the attributions below. Corrections have been made, errors struck through. Apologies to all for my mistake.]

Hey, everybody? Is it just me, or has Senator John McCain been feeling a lot less mavericky these days? I know, I know, it wasn't too long ago that McCain himself disowned the label, telling Newsweek's David Margolick, "I never considered myself a maverick" -- a claim which defied credulity, based upon the available visual evidence. But even with that in mind, it seems like McCain's old "maverick" flavor has started to wear off.

Well, guess what! A Princeton Ph.D. candidate by the name of Benjamin Lauderdale has actually proven that John McCain isn't a maverick anymore, using the maths!

It's all part of a recent paper entitled "Unpredictable Voters In Ideal Point Estimation". If you like political theory, statistical analysis, complicated equations that look like the set dressing on "Good Will Hunting", and the facile utilization of words like "homoskedasticity," then this paper is basically your "Eat Pray Love". For the rest of us, we'll just skip to the part where he's, using Lauderdale's methodology, John Sides of The Monkey Cage has made charts and graphs that will finally make it clear. (With a hit tip to The Washington Independent): 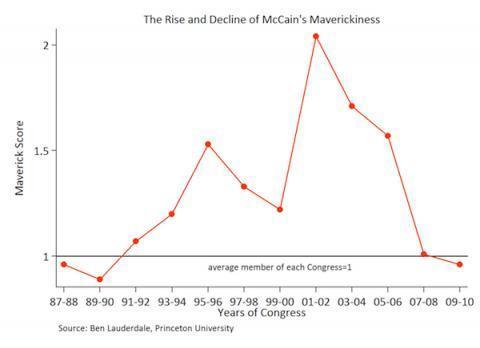 You know, I had this weird feeling that as a candidate in 2008, John McCain had mainly gone from an independent-minded politician to a dead-average party-hack type! Thanks for bearing this out, mathematics!

The Windy's Aaron Wiener gets Lauderdale's Sides also offers takes on the "true mavericks" in Congress, which he identifies as Representative Ron Paul (R-Tex.) and Senator Russ Feingold (D-Wisc.). You can check out the top ten by clicking here.