There is an air of both tragedy and farce as the Arizona Republican primary for the United States Senate comes to a conclusion this Tuesday. Incumbent John McCain -- a venerated war hero and once celebrated presidential candidate -- has been forced into the sludge against an unworthy opponent, J.D. Hayworth, in what is likely to be the final campaign of his political career. McCain has sullied his carefully crafted legacy by swinging sharply to the political right, betraying his once hard-forged positions on everything from immigration reform to global warming.

In many respects, the McCain image as a "maverick" and "reformer" has always been something of a charade. McCain's seminal role in the Keating Five scandal during his first term in office forever tarnished his reputation. Indeed, there are many who would argue that what we are now seeing is the real McCain--stripped bare of the fanciful narrative--whose guiding light is neither public virtue nor principle, but raw ambition and a lust for power.

"There are two John McCains," a close friend of the senator's told New York Magazine's Joe Hagan. "The one I love is a very big man, and he's willing to take on big issues in a big way. Then there's another side of John, he'll admit, that is petty and angry and petulant and small, and that side has overtaken the other one."

For all his proclamations about congressional earmarks and fiscal transparency in the federal budget, McCain has always run with a close coterie of DC-based lobbyists, particularly during the campaign season, when his political ambitions merge with those of special interest groups who have poured money into his campaign coffers. Indeed, during McCain's ill-fated run for the presidency in 2008, McCain's proximity to lobbyists became the driving counter-narrative of the campaign.

At the center of McCain's lobbying controversies has been uber-lobbyist Rick Davis, his on-and-off-again presidential campaign manager who, according to Hagan, has sold what was left of McCain's soul to the devil this summer in the blistering Arizona desert.

Davis has long been a shady and controversial figure around McCain. A University of Alabama drop-out and former political operative in the Reagan White House, Davis worked his way into McCain's inner-circle in the late 1990s by forging a relationship with McCain's wife, Cindy, who once described Davis to Katie Couric as "our closest friend."

During the 2008 campaign, it was Davis--who after being demoted for a second time by McCain--was assigned the task of overseeing the selection process of the senator's running mate, a process which he bungled badly. Not only did he fail to lay the political groundwork for McCain's first choice of Joe Liebermann, he also oversaw the last-minute and haphazard vetting process that resulted in the erratic and self-serving Sarah Palin joining McCain on the GOP ticket. For that alone, Davis has earned a permanent asterisk in the annals of American political history. 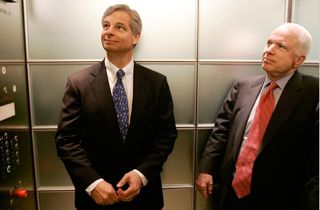 Davis himself was the focus several negative stories directed at the McCain campaign. First there were the revelations that Davis had worked for the Russian aluminum magnate Oleg Deripaska and had set up a meeting in Switzerland with McCain and Deripaska, whose "suspected links to anti-democratic and organized-crime figures are so controversial," the Washington Post reported, "that the U.S. government revoked his visa."

Then came the revelations that Davis's lobbying firm was paid nearly $2 million by Freddie Mac--the controversial federal mortgage giant that was placed in receivership during the middle of the 2008 presidential campaign.

Davis and McCain were also linked to gambling interests in a celebrated New York Times expose that featured an account of McCain tossing $100 chips at a craps table in a Connecticut casino with Davis at his side--this at a time when McCain was regulating the operation of Indian casinos as a member of the Senate Indian Affairs Committee.

Less well known was what one senior McCain advisor called a "kickback scheme" orchestrated by Davis to skim five percent of all expenditures from the McCain campaign into a partnership, Management Alliance Realty, Inc., created by Davis's friend and lobbyist Scott Reed and Reed's controversial client, Indian-casino developer and lobbyist Richard Fields. According to the Wall Street Journal, Davis also formed a company (3eDC) overseeing McCain's internet campaign contributions for which he initially charged the campaign more than $1 million.

For all the controversies, Davis is once again riding shotgun with McCain in Arizona, serving with another controversial lobbyist, Charlie Black, as senior advisors to the campaign. It has been based on Davis's advice, according to Hagan --with apparently little regard for public perception of McCain's integrity--that McCain has denied his "maverick" legacy and is sounding more and more like the right-wing Republicans with whom he once waged battle.

That McCain will win his war against Hayworth on Tuesday goes without saying. The sad truth of the matter is that having his lobbyist pals at his side probably hasn't hurt him. He has raised nearly $20 million to Hayworth's $2.5 million. He may have once branded himself a political reformer, but with John McCain, the democratic process has always come with a price attached.