I always believed the man was out of his depth and a raging conservative, despite his support of political campaign contribution reform. However, his stubborn and at times inane clinging to policies most Americans now regard as foolhardy encourages me to believe that, in spite of recent Democratic Party losses, the Republicans will fall short of regaining control any time soon. 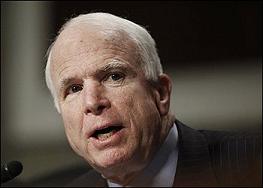 One by one the Republicans on the committee, Jeff Sessions (R-Ala), Saxby Chambliss (R-Ga) and Roger Wicker (R-Miss), all right-wing southerners, joined McCain (R-Ariz), who cited as support of his views a statement opposing repeal signed by over 1100 retired general and flag officers. The fact that the current chairman of the Joint Chiefs, Admiral Mike Mullen, was sitting in front of them indicating his personal preference for tossing out the law meant nothing at all. In fact they accused Mullen of following orders when he said, "I cannot escape being troubled by the fact that we have in place a policy which forces young men and women to lie about who they are in order to defend their fellow citizens." They were convinced Mullen was forced to say what he had because he was bound to Barack Obama as his commander in chief.

However, Mullen specifically said he was giving his own opinion, which Committee Chairman Carl Levin (D-Mich) reminded one and all at the hearing's close, a testament he took to be true as the admiral was bound by the oath he'd sworn at the outset. That Mullen further stated he'd served with gays and lesbians since 1968 didn't move the intransigent stick-in-the-mud Republican dogma. 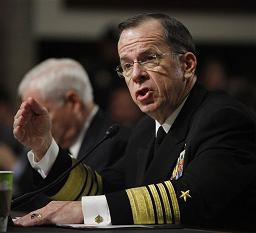 Ironically, it was a Republican, moderate Susan Collins of Maine, who made the greatest case against her own party. She asked Mullen pointedly whether in discussions with his NATO allies, whose forces joined ours in the Middle East and whose military allowed gays to serve openly, if they'd advised him of any problems. He replied he'd been told it was not an issue at all.

To Senator Jack Reed (D-RI), Mullen further said that such integration of foreign militaries had likewise not in any great way affected Americans who had to serve alongside their gay comrades from other nations. Mullen also stated, in response to Senator Claire McCaskill (D-Mo), that there'd been no broad indication of any objection to changing the law by those in our current military.

McCaskill then brought up an interesting point related to the yearlong study Defense Secretary Robert Gates and Mullen proposed to examine the long-range impact on gay integration in the military. She repeated the statement that Mullen had no personal problem, that foreign militaries with gay integration had no problems and that it was well known and acknowledged that gays currently served in the American military. She then added the irony that under the present law Gates and Mullen would not be able to receive personal input from American gay servicemen and women without jeopardizing their careers. Mullen admitted this was a hard one to deal with, but that he and Gates would look for a way around it, and, as a start, would be talking with those who'd been separated because they were gay.

And how intriguing to see Joe Lieberman (I-Conn) return, at least on this issue, to the party that gifted him with its vice presidential nomination in 2000. In spite of the fact that Lieberman supported McCain in 2008 and generally shares his conservative stance about Iraq and Afghanistan, he took umbrage at the notion that gays in the military presented a danger. He said, "it just seems to me you ought to judge a member of our military by how they perform in the military and not by their sexual orientation." He added that people in a tank would be more concerned with the courage of their partner and the fact they were prepared to risk their lives in the defense of their country.

McCain and his party colleagues nonetheless stayed true to form with the exception of Collins and reiterated every chance they got the bigoted expression of support signed by former military leaders. The fact that these retired folks represented a different generation and were out of touch didn't seem to faze them. This notion was best brought out by interim Senator Roland Burris (D-Ill), who likened the current debate to the controversy when Harry Truman integrated the services sixty years ago.

All the comments from McCain et al about how military readiness and performance would be affected by being forced to work alongside gay people had been previously stated back in the forties with respect to whites working and sleeping closely to blacks against whom they'd long discriminated. David Gergen told CNN's Anderson Cooper that, while he opposed McCain's position, he felt it to be sincere. To me, Gergen was soft soaping McCain's hostile rigidity.

It's outrageous a man like Senator McCain, recently publicized as being at odds with his wife and daughter regarding gay marriage, can function at such a high level in politics, exhibiting none of the maverick sensibility that appealed to so many during his candidacy in 2000. But perhaps that was a sham, designed to distinguish himself from George Bush the younger. It's more likely that what we saw on C-SPAN and repeated on YouTube, NBC, CBS, ABC, MSNBC and Fox News throughout the day and talked about on Facebook and Twitter was the real John McCain. We better hope he stays on the sidelines of power in our nation.