Chefs know the power of aesthetics when it comes to selling a plate of food. Just take a look at the world's most beautiful restaurant dishes -- you'll want to eat them, but you'll also want to stop and stare.

To enjoy food is not just to satisfy a hungry belly, but to excite all five senses -- particularly sight (see: Instagram). Perhaps, more than ever before, we seek eye-catching meals to earn a "like" or make an audience far away feel pangs of jealousy. Often, food can be manipulated to appear gallery-worthy, but many times it's food in its purest form that deserves appreciation.

John Moore, who founded Salad Savoy Corporation with his wife, Marsha, knows a thing or two about highlighting the natural beauty of food -- specifically vegetables. But Moore is not a chef; he invents and harvests the exquisite-looking vegetables that get shipped to grocery stores and restaurant kitchens. On a trip to Sweden in the early 1980s, Moore visited a vegetable garden and was taken by the vibrant appearance and delicious taste of a particular lettuce. The experience drove him to create an entirely new vegetable in the U.S., which he trademarked as Salad Savoy and named his company after.

The plant comes in vivid shades of purple and white, is rich with nutrients and is available year-round. It's a cross of kale and other members of the mustard family. Moore won't reveal the precise mix, but he says if you like the taste of broccoli, cauliflower or cabbage, you will enjoy Savoy.

Moore's most recent vegetable endeavor is the Lollipop, which he brought to the market in 2012. It's not an artificially colored saccharine sucker, but a Brussels sprouts-kale hybrid (also known as kale sprouts) that is seriously trending in the food world. Amanda Cohen, the chef and founder of New York City's Dirt Candy, an award-winning vegetable restaurant, will be featuring the food item on her menu this spring. Grand Central Station's famous Oyster Bar also serves the veggie. 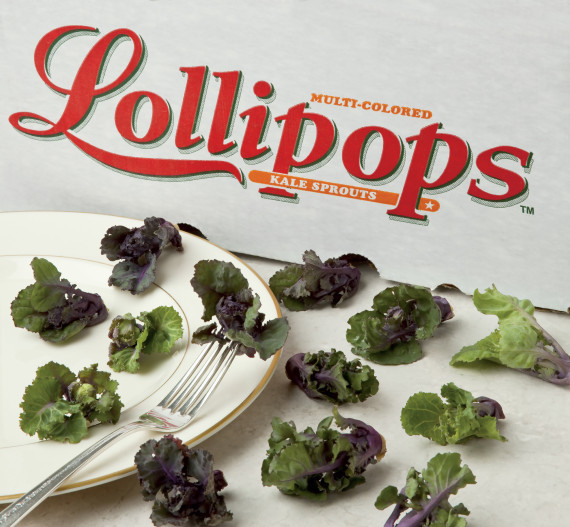 According to Moore, kale sprouts have a sweet peppery flavor and are packed with nutrients: They contain twice as much vitamin C compared to the standard Brussels sprout. Moore's Lollipops are a cross between red kale and brussels sprouts and grow in a very petite, roundish shape, which explains their namesake.

Salad Savoy's success can be attributed to what Moore calls the company's "triad of success:" color, taste and nutrition. Dr. Seuss-esqe veggies are a delight to look at, but there's more to the equation. With evolving produce, chefs are given the opportunity to be more creative in the kitchen -- it's like adding more paint variations to their palettes. And their patrons enjoy the variety. "Thanks to the 'foodie movement,' people are enjoying going out and seeing and eating unique food," Moore tells The Huffington Post. And since the chefs are given more creativity, "some vegetables are incorporated in the center plate," becoming the main event rather than a measly side dish (as veggies have been served in the past).

A focus on a vegetables' aesthetics, then, can increase the consumption of them: When veggies are nice to look at (and taste), chefs become more eager to make them the stars of their plated performance. It might be a stretch, or a too-intense optimistic wish, but perhaps a progressing focus on vegetable display could change the way Americans eat. Research shows that plant-based diets -- or even just diets that incorporate a lot more veggies -- can help prevent diabetes, lower risk for cardiovascular diseases and support a healthy waistline. In a country where more adults are overweight than not, these benefits are desperately needed.

Moore is still working to give chefs, home cooks and Instagrammers more fresh, plant-based materials to work with. Bright Lights, a Swiss chard with rainbow-colored stems and Carnival Multi-Color Cauliflower are two of Salad Savoy's other trademarked vegetables that are as pleasing to the eye as they are to a nutritionist. Keep an eye out for more prismatic plants to come.