On Sunday, John Oliver's main story was a look at the racism and corruption inherent in the American prison system, and our national apathy toward it. And if you think that sounds terribly unfunny, you're right ... Oliver doesn't find it funny either.

But don't despair: there's a puppet sing-along at the end of the segment.

After dropping the bombshell that the United States has more people in prison than China, Oliver detailed the racial inequity in incarcerations, the horrid conditions in which prisoners live, thanks in no small part to privatization, and how most Americans are so disassociated from caring about prisoners, "prison rape" has become a common and acceptable punchline in mainstream media.

And with so many Americans in prison, the largest percentage of them due to drug charges, even "Sesame Street" is having to run segments teaching kids how to cope with a parent going to jail. Oliver lamented the sad state of things, saying, "We now need adorable puppets to explain prison to children in the same way they explain the number seven or what the moon is."

However, as with anything, where there's a problem, there's a way to make money off of it. The U.S. has outsourced many of its prison services to corporations who promise to reduce costs while -- cough -- rehabilitating prisoners. And it's working out just beautifully, as long as you don't mind sugar in your C-sections and maggots in your food.

Watch the full clip above and make sure to stay to the end for Oliver's adorable "Broken Prison System" sing-along. 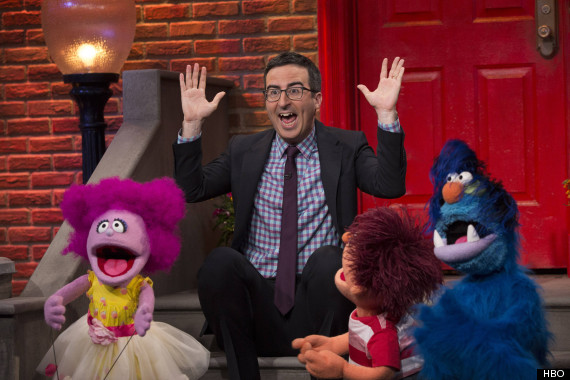