When we look back a few years from now, this might be the moment we'll say the verb "Olivering" became a thing. Because Dr. Oz just got seriously "Olivered" on "Last Week Tonight."

When he appeared before Congress last Tuesday, Oz was forced to admit that many of the dietary supplements he has touted on his show don't pass "scientific muster." John Oliver considered that admission egregious enough to warrant a name change for "The Dr. Oz Show," to something a little more honest: 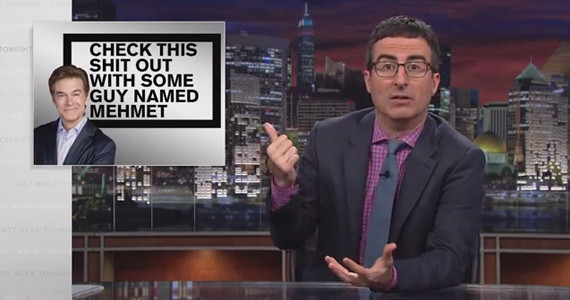 With Oz's testimony as a jumping off point, Oliver used a full 16 minutes of his show's running time to hammer in the disastrous long-term effects of the deregulation of dietary supplements thanks to their powerful lobbying efforts.

More importantly, since Dr. Oz still has an hour-long show to fill every day, Oliver gave him a primer in how to pander to his audience without endangering their lives. Spoiler: It involves Skyping with George R.R. Martin, a T-shirt cannon and Steve Buscemi tap-dancing.

Watch the full clip above. You might call it a "magical cure" for false advertising.