On the final "Last Week Tonight" of August, John Oliver dove into what sadly has become the biggest national news story of the summer, the ongoing violence in Ferguson, Missouri.

"This whole story is depressingly familiar," Oliver began. "And there are so many unanswered questions regarding why an officer would shoot an unarmed teenager. What is absolutely clear is that the police have handled everything since then terribly."

From there, Oliver went on to criticize officials at every level in Missouri, from the city's police chief and mayor to the governor, for their tone-deafness, hostility and overt patronization of the citizens of Ferguson.

The comedian reserved his most pointed barbs, however, for the police themselves, not just in Ferguson but throughout the country. While Oliver made it clear that "not all cops are bad," he drove home the top-down problem of an increasingly militarized police force in the wake of the war on drugs and September 11 attacks.

"The police are not soldiers. So why in this photo from Ferguson are they wearing fucking camo? They are northwest of St. Louis, not northwest of the Amazon." He went on, "If you are a cop in the United States, you should dress for the job you have, not the job you want." 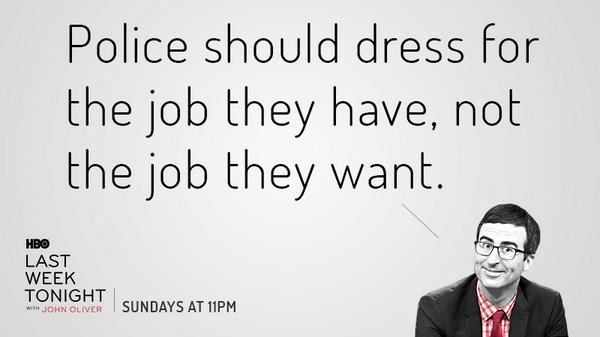 1 / 32
Outrage In Missouri Town After Police Shooting Of 18-Yr-Old Man
JENNINGS, MO - AUGUST 11: Lesley McSpadden, mother of slain 18 year-old Michael Brown speaks during a press conference at Jennings Mason Temple Church of God In Christ, on August 11, 2014 in Jennings, Missouri. The fatal shooting by police of the unarmed teen in Ferguson, Missouri has sparked outrage in the community and set off civil unrest including looting and vandalism. (Photo by Michael B. Thomas/Getty Images)
Michael B. Thomas via Getty Images