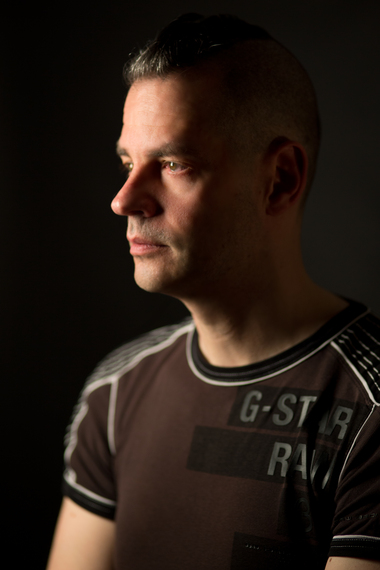 Award-winning novelist, playwright and publisher, John R. Gordon has released one of the most exuberant graphic novels of the year. His book, Yemi & Femi's Fun Night Out, puts a sexy, subversive spin on the gay coming-of-age narrative by focusing its lens on a pair of young, British-Nigerian youths and their sexual exploits in South London. The comic is also a smartly drawn, intelligently presented primer on HIV prevention, particularly in relation to young, black gay men in Britain. We sat down with John R. Gordon to discuss the pleasures and challenges involved with creating this project.

How did Yemi & Femi come about? What inspired you to create this comic?

I was writing a poetic play called Sakpata Song, in which I was trying to find a way of talking about HIV-AIDS that wasn't boring and depressing. Out of the blue these two fast-talking gay urban youths erupted into the narrative -- literally: being physically flung out of a club and onto the stage for having sex in the toilets. I named them Yemi and Femi and they instantly took on a life of their own: their vivid way of talking and cheeky, irreverent worldview was a joy to write, and made all sorts of conversations that would have been off-putting in 'standard English' surprising and entertaining, and opened up the possibility of being genuinely funny about deadly-serious subjects. The key to them is that they take great conscious pleasure in wit and word-play, so there's a smartness to them that's appealing however dumb some of the things they say seem to be, as is the way they blurt out what so many of us think but tend not to say out loud.

I then wrote them a whole play of their own, and that became the script I adapted into the graphic novella. In between I presented a 5-minute version of the play at the Bush Theatre in London, and the audience really loved them and -- crucially -- found them authentic, which was really encouraging. Writer-director Rikki Beadle-Blair, founder of Team Angelica, and co-founder of our book imprint, knowing I was an artist (I've done several of our book-covers), suggested I do their story as a graphic novel. I whined that it would be a lot of work but secretly really liked the idea, and he was a brilliant sounding-board. In particular he urged me to give the story a more romantic focus (the initial focus was around casual sex) and bring Femi's HIV+ boyfriend Mixtape back into the story after Femi's initial rejection of him. He was absolutely right, and Mixtape as 'the third Musketeer', as Rikki put it, of their friendship group, hugely enriched the story and extended its emotional scope.

I particularly liked the idea of creating something that might reach black gay youths who mostly get ignored because they aren't big readers, likely don't follow health campaigns and don't engage with what they see as 'intellectual' debates, but who might pick up a comic that looked sexy and fun, find themselves reflected within it, be entertained, and also think about some of the issues around safe sex & HIV, infection rates of which are dreadfully high amongst young black gay men in the UK and US. 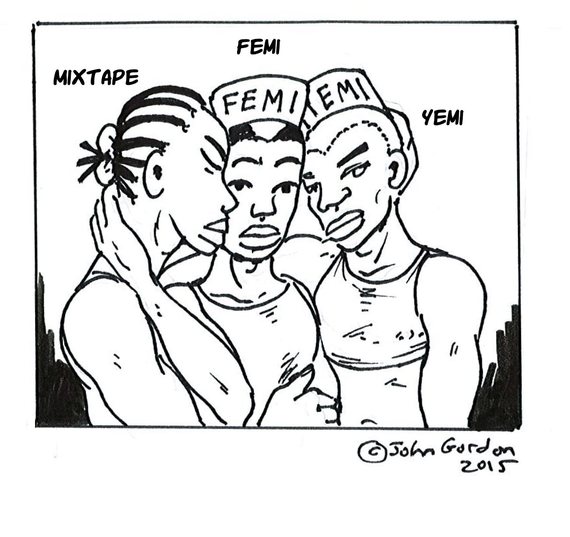 How long did it take you to write and bring the story to life?

I was evolving the characters and the script for about a year and a half; the storyboarding and drawing up, and the rather endless corrections & adjustments (due to my inexperience and clumsiness), took about 6 months of fairly intense work.

What were some of the challenges you faced during the drawing and inking process?

The volume of work -- I'd thought it would be about 24 pages, but it ended up being 40 -- was the biggest challenge. I'd given myself a fairly tight deadline, and, though I'd chosen a fairly simple style, effective simplicity has its own challenges -- a basically naturalistic look and clean, strong composition of both individual panels and pages is hard work to achieve. Just maintaining a consistent look for the characters across so many pages was harder than I'd expected, and I ended up redrawing a lot of faces afterwards, once their appearances were more set in my mind -- or in my hand. In theory you can work that all out beforehand: in practice you don't -- or not when you're comparatively inexperienced, as I was. To avoid RSI I did a lot by hand -- cutting and pasting up, rather than on the computer, which was time-ineffective.

What do you hope people will take away from Yemi & Femi?

I hope they'll be entertained, and that they'll feel I've caught something truthful about the characters and their lives; that they'll enjoy the art and the language; that in some way they'll love what I call my lil' nephews; and that they'll think about issues around HIV in a human and humane way when there's so much harshness and judgementalism: slut-shaming and bottom-shaming and so on.

Which graphic novelists have inspired you over the years?

As a kid I loved Marvel's hard-edged male-physique-idolising styles. Howard Cruse, especially his Civil Rights-era Stuck Rubber Baby; Alison Bechdel, whose Dykes To Watch Out For I've been reading since it began; Fun Home, Maus, Persepolis and Epileptic; Aline Kominsky's spiky, intentionally ugly confessional work and, though he's problematic in many ways, Crumb; Charles Burns; the Hernandes brothers; Marguerite Abouet 's charming series set in the Ivory Coast in the 70s, Aya of Yop City. Belasco. Robert Kirby; Glenn Hanson and Alan Neuwirth. Most recently My Friend Dahmer, by Derf Backderf, which is awkward in just the right way.

What's next for Yemi & Femi? Do you plan on doing more with the characters?

I very much enjoy writing and drawing shorter narratives for them and posting these on social media, where people have said they like following their antics, so I'll carry on doing that. The original edition is a free giveaway, but once that initial print-run is gone I plan to follow it up with a for-sale edition, (to which I'd add all the subsequent short strips and one-offs, so they'll be collected together for fans). As I originally wrote them as characters in a play, I'd love to stage that play. I'm also planning a Young Adult novel told from Femi's point of view, which would be an interesting challenge in terms of sustaining his voice with integrity while telling the tale clearly and effectively in classic storytelling terms.