Running for a Senate seat in Appalachia, the Raese campaign could hardly have been thrilled that one of the most widely disseminated talk show hosts in the nation had reminded listeners of his part-time Florida residency. More than that, the club to which Limbaugh appeared to be referring was the Everglades Club in Palm Beach, an elite hangout that, as of 2008, had never let in a black member.

Membership at Everglades doesn't come without political costs. It was a major point of contention when Limbaugh was trying to purchase a stake of ownership in the St. Louis Rams' NFL franchise. Joseph Kennedy quit the club when his son became president, as did Georgia GOP Senate candidate Guy Millner when he ran against Max Cleland in 1996.

But Raese's campaign refused to deny that he was a member of this club. Not only that, they refused to admit his membership as well. Rather, when The Huffington Post published a piece following up on Limbaugh's statement, a spokesman mocked the fact that there was no concrete evidence.

On Wednesday, a reader pointed to a bit of evidence. The United States Golf Association (USGA) keeps an online index of the scores that golfers post (at their own discretion) upon finishing a round. And when you type in Raese's name into the database, and select the state of Florida, only one course comes up: The Everglades Club. 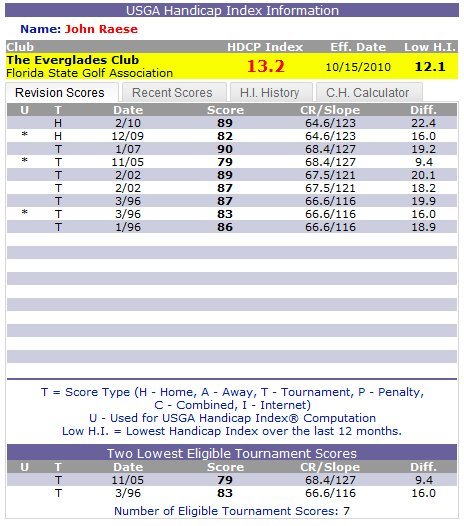 Asked about the scorecards (Raese shoots a slightly better round than Limbaugh), the Raese campaign continued to refuse to say whether he belonged to the club, responding that there were weightier topics to address.

"[T]here are real issues out there," said spokesman Kevin McLaughlin. "It is widely believed that Gov. Manchin is under federal investigation for awarding no-bid contracts to cronies and using the state plane to shuttle his friends and political supporters around on the taxpayer dime, West Virginia unemployment went over 9% this month and Democrats are obsessed with this?"

McLaughin's complaint is not, necessarily, unfair -- though topics like these are standard political banter in an election's closing weeks. That said, the issue of involvement at the Everglades does get at a broader, legitimate point that has plagued Raese's candidacy; mainly, that he spent a large portion of his time in Florida's upper-crust social scene before running as an everyday populist in West Virginia.