The Brooklyn Museum is currently presenting 93 watercolors from John Singer Sargent, an artist known for his oil painted society portraits. Yet each work almost appears to be made of a medium all its own -- the gauzy white that represents ocean foam, for instance, appears worlds different from the white impasto of a ruffled gown.

The exhibition, titled, "John Singer Sargent Watercolors," stretches the artist's legacy from conventional portraitist to a experimental painter on the brink of modernism. 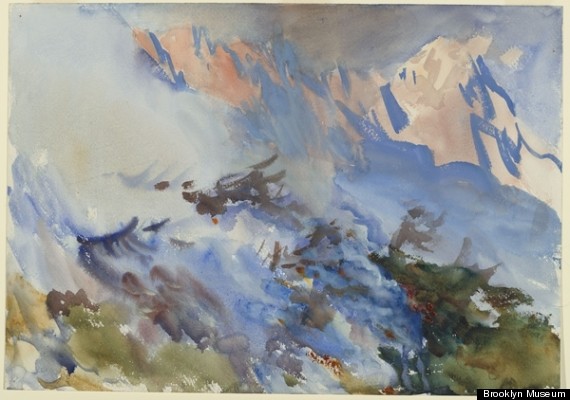 For the massive show, The Brooklyn Museum combined the 38 works in its own collection with those from the Museum of Fine Arts, Boston. The combined selection follows Sargent on a soul-searching journey from Venice to Syria to the Italian Alps and beyond, spanning the key decade from 1902 until 1912.

Sargent's medium shapeshifts with the territory he depicts; sometimes the diluted pigment fades into translucent vapor. In other works Sargent squeezes color straight from the tube, producing bulky paint that camouflages as acrylic or even pastel. In his "Bedouin" series Sargent pushes watercolor to its limit, its thickness so overpowering the paint begins to crack, giving his subjects the impression of being scorched in the sun.

At the exhibition preview Arnold L. Lehman, director of the Brooklyn Museum, lingered in front of a particular painting entitled "Corfu: A Rainy Day," in which a woman rests on the couch, her shoes strewn beside her on the floor. Although the subject's dress was rumpled in delightful disarray around her, Lehman's attention lingered on the shoes. "The informality of those shoes," he said. "Nobody else would think to do that. The informality, it's a symbol of contemporary life."

Sargent floats in the peculiar space between a formal society portrait and an avant-garde experimental work, making him nearly impossible do define or pin down in the evolution of modern art. With brevity, curiosity and informality Sargent remakes the world in watercolors, teasing with the existing rules of representation though not outwardly rebelling against them. The exhibition suggests that sometimes the most interesting aesthetic move is not the most radical one. Sargent chose to dwell somewhere between old-fashioned and modern, not creating to rupture artistic tradition but simply for the pleasure of travel and paint.

"John Singer Sargent Watercolors" is on view until July 28, 2013 at the Brooklyn Museum.

Do you see Sargent's works as modern, old-fashioned, or something else entirely? Let us know your thoughts in the comments.